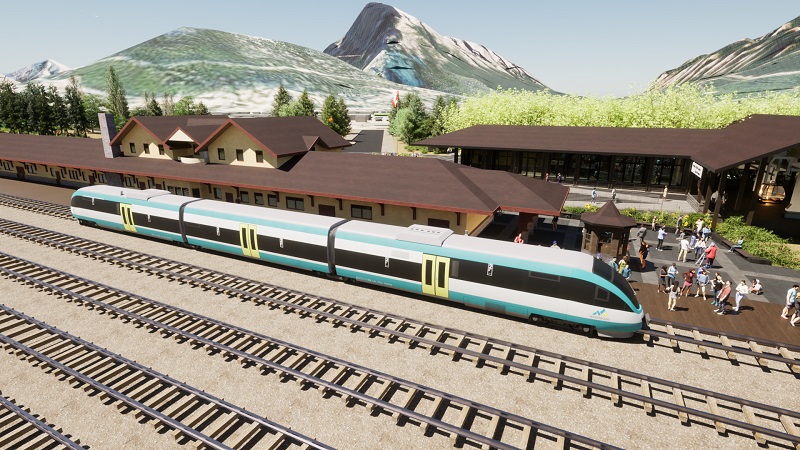 Liricon Capital Ltd. and Plenary Americas, a portfolio company of Caisse de dépôt et placement du Québec (CDPQ), announced that they have submitted an Enhanced Unsolicited Proposal to the Government of Alberta’s Ministry of Transportation, Invest Alberta Corporation, and the Canada Infrastructure Bank (CIB) to advance the Calgary Airport-Banff Rail (CABR) project from Phase 3, development, to Phase 4, design. This advancement positions the project for success in the fifth and final phase, construction and implementation.

“My family and I are thrilled that Plenary Americas has joined us to be the Co-Developers of CABR,” stated Jan Waterous, Managing Partner, Liricon Capital. “We now have a world-class development and engineering team which allows our ongoing partnership with the Government of Alberta and Canada Infrastructure Bank to advance the project to its fourth phase – design – and positions the project for success in achieving its fifth phase – construction – prior to operating services.”

Added Brian Budden, President, Plenary Americas: “Plenary Americas is pleased to join Liricon Capital in its commitment to develop a fiscally responsible, affordable and competitive P3 which provides confidence and certainty in development, 4 implementation and long-term operations of the CABR Project.”

The Proposal is structured as a public-private-partnership (P3), which contemplates financing from private and institutional capital and the CIB. That approach creates the opportunity for the Government of Alberta to leverage private sector capital and expertise and CIB financial support to deliver a world class airport to downtown to mountain rail system by 2025 that has the potential to be hydrogen powered. CABR will increase labour mobility, diversify Alberta’s economy and enhance the environment. Polling indicates that 82% of Albertans and 90% of Canadians support the project (Advanis, 2019).

“The Calgary Airport to Banff Rail project will put Calgary on track to help meet our climate targets through sustainable transit, boost our economy, and provide a connection for Calgarians to access the airport from downtown,” said Jyoti Gondek, Mayor of Calgary. “The low-carbon rail line will be a game changer for the tourism sector, bringing visitors downtown to enjoy all that Calgary has to offer, adding Banff as a bonus addition to their travel.”

The CABR system will operate on a new, dedicated passenger line built within the existing CP Rail freight corridor and will provide high frequency, reliable service between 7 stations: Calgary Airport, Calgary Downtown, Calgary Keith, Cochrane, Morley (Stoney Nakoda), Canmore and Banff. Net ticket costs from Calgary to Banff for Albertans are estimated to be about $20 taking into account anticipated discounts to the Park.

“A rail connection between Banff and YYC Calgary International Airport is a critical way to connect travelers to one of Canada’s most awe-inspiring destinations while providing long-term economic, social and environmental benefits to the region. We look forward to helping advance this transformative project,” Bob Sartor, president & CEO, Calgary Airport Authority President.

The service will provide the capacity to meet demand for transportation from the Calgary Airport and downtown Calgary then on to Banff, as well as the capability of running an express service between Calgary Airport and downtown Calgary every 15 minutes. In addition to supporting the visitor economy, the airport link will support the transportation needs of the estimated 50,000 people who work at the airport.

The Proposal builds on the ridership and capital cost studies completed by Alberta Transportation in 2018 during the conceptual phase of planning, and by the CIB in 2019-2020 during the feasibility phase. Liricon/Plenary have added a private sector development perspective to these studies to submit this Proposal. It allows Alberta to take advantage of the opportunity presented by Canada Infrastructure Bank and the vision displayed by Infrastructure Alberta in publishing its Unsolicited Proposal Framework and Guidelines in December 2020. 2

The P3 (private capital and CIB) will contribute all the $1.5 billion in capital costs and operate the system. The Proposal seeks a Government of Alberta annual performance payment of $30 million per year for the project and Alberta Government payments do not begin until construction is complete in 2025 and are contingent on the performance of the train. The Proposal contemplates private capital and CIB taking the risk that CABR’s ticket fare revenues will cover its operating and maintenance costs and more than half of its capital (interest and principal) costs. The Government of Alberta annual performance payment is covering less than half of the project capital costs and would be approximately 20% of the equivalent cost of Government of Alberta developing the project on its own.

The Proposal is based on conservative estimates of capturing less than 25% of visitors to Banff National Park. Parks Canada has a range of options to encourage visitors to the Park to take the train instead of a personal vehicle. Liricon/Plenary look forward to working with Parks Canada on the role CABR can play in reducing the impact of personal vehicles on the Park.

During the Design Phase, Liricon/Plenary intend to work with the Government of Alberta to engage, consult and collaborate with Indigenous communities in the Bow Valley about the project. Liricon/Plenary will also solicit input and conduct consultation from the municipalities to ensure the project can be supported for many years in the future.

Like many rail projects, CABR will provide both labour mobility and environmental benefits further detailed below. However, CABR’s value to the Government of Alberta is exceptionally compelling relative to other mass transit rail systems for two key reasons.

First, the direct economics of the system are unusually attractive because of its unique attributes. Construction costs are very low and the time to build is comparatively short because it will be built in an existing railway corridor. Further, CABR can generate far higher revenue per passenger than commuter systems by charging premium fares to visitors arriving at the Calgary Airport while keeping Albertan’s travel costs affordable. This pricing mechanism is similar to European trains to mountain destinations where out-of-market tourists subsidize local riders.

Second, CABR provides the Government of Alberta compelling indirect economics by expanding and diversifying the province’s economy through increasing tourism spending. Currently the large majority of visitors arriving at the Calgary Airport whose ultimate destination is Banff National Park travel to the Park by highway bypassing the city centre. CABR will bring visitors downtown providing them the opportunity to stop to enjoy Calgary attractions. Calgary Economic Development has estimated that CABR may expand tourism spending by more than $1.2 billion/year.

CABR will diversify the Alberta economy with output of $5.11 billion to Canada (of which 84% is expected to occur in Alberta) and the project will create 19,984 full time equivalent jobs and generate $1.17billion in wages in salaries (WSP 2020).

The CABR project is uniquely suited to pursue state-of-the-art low carbon technologies, such as hydrogen-powered rolling stock, as they become increasingly commercially available. But even assuming the use of modern diesel-electric locomotives, the train will materially reduce greenhouse gas emissions, eliminating 429,956 tones of CO2 (Transition Accelerator, 2020). The CABR system directly supports the BANFF NATIONAL PARK NET ZERO 2035 initiative to make Banff the first community in North America to be net zero.

The Proposal takes advantage of the opportunity presented by Canada Infrastructure Bank and the vision displayed by Infrastructure Alberta in publishing its Unsolicited Proposal Framework and Guideline in December 2020.

Liricon entered into a Memorandum of Understanding with CP Rail in April, 2021 to lease a portion of CP Rail’s corridor running the 150 km between the Calgary Airport and Banff to be able to build a dedicated line. In May 2021 Liricon provided Alberta Transportation and CIB an unsolicited proposal to act as the project developer and on July 15, 2021, Alberta Transportation and CIB announced the advancement of the project to the development phase, encouraging Plenary to partner with Liricon as co-developers of CABR and make possible the Proposal.