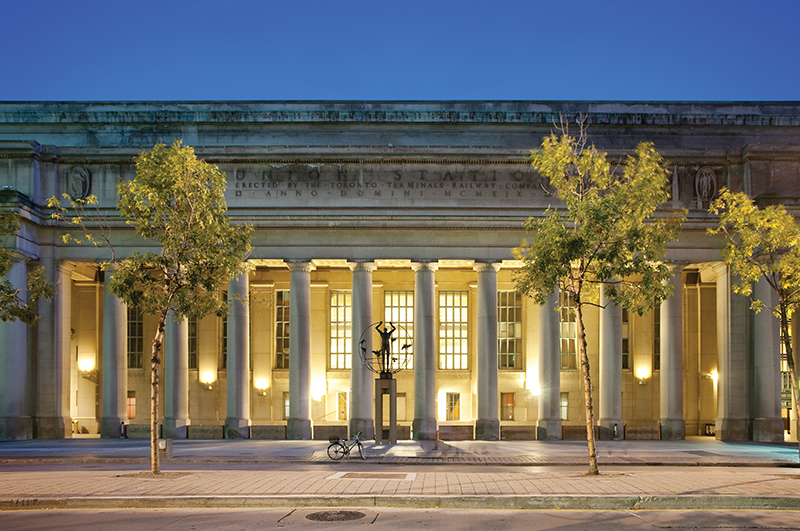 Toronto’s Union Station is a well-known landmark to both commuters in the Greater Toronto Area, as well as Canadians across the country. Whether it was to hop aboard or depart a VIA Rail train, jump on the subway, or use the GO Transit system, there’s a good chance you’ve walked through the majestic Great Hall of Union Station at one time or another.

A stunning example of 1920’s Beaux-Arts railway station design and architecture, Union Station officially opened to the public in 1927. But like most heritage buildings, Union Station began to look weathered over time and needed significant restoration work and expansion to keep up with Toronto’s ever-increasing population.

When the City of Toronto took ownership of the iconic station in 2000, it quickly began reviewing options for the restoration of the building. In addition to restoring the landmark to its former glory, the city wanted to ensure the station was ready to service the tens of millions of commuters that currently rely on the station, as well as design it for the growing number of commuters in the future.

The end result was a wide array of new features and additional square footage for Union Station which included a gross floor area increase of 14 per cent from 822,000 square feet to 936,000 square feet; tripling the capacity of the GO Concourses through the completion of the York Concourse and the revitalization of the Bay Concourse; a revitalized VIA Rail Concourse and Panorama Lounge; Front Street, York Street and Bay Street glass moat covers; expanded PATH access; and two new bike parking stations.

If this work wasn’t difficult enough to perform while ensuring all the trains moving through Union station ran uninterrupted, add in the creation of an entirely new floor running under the concourses filled with 160,000 square feet of retail space, including the Union Food Court and Fresh Market (coming in 2022).

The daunting task of designing many of the new and restorative aspects of this massive undertaking fell to NORR Limited Architects & Engineers, an employee-owned, fully integrated, Canadian-based A&E firm with a team of more than 700 architects, engineers, planners, and interior designers that work across 14 market sectors in Canada, the U.S., U.K. and UAE.

Silvio Baldassarra, chair of NORR, led the design and structural engineering for the Union Station Revitalization Project. Before joining the project, Baldassarra had worked on several incredibly challenging infrastructure projects. A few of his more high-profile projects include the construction of Toronto’s SkyDome, renamed Rogers Centre (project manager, 1986 to 1990); the Terminal 2 Redevelopment project at Pearson International Airport (architect and project manager, 1989 to 1998); the Pierre Elliott Trudeau Judicial Building in Ottawa (principal in charge, 1991 to 2005); and the Calgary Courts Center (project leader, 2003 to 2007).

“Coming up with the original concept was a challenge for us, trying to preserve the heritage quality of Toronto’s Union Station. We looked at all of the options,” he says.

One of the most challenging and unique aspects of the project was the construction of the new retail floor underneath  the concourses.

“The concept of doing the dig-down developed in the original study we did in 2007 for the City of Toronto. We felt that digging down below the station would make the project meet the goals they were looking at,” Baldassarra says.

NORR’s plans for building a new retail space under the concourses included digging down three metres under the existing concourses and cutting and expanding the 280 existing concrete columns holding up the floor above, where millions of commuters were hopping onto subway trains to get to their destinations. When NORR presented its plans for the dig-down, the City of Toronto brought in three peer reviews of major structural engineers. All three peer reviews concluded NORR’s concept was sound engineering.

“We actually cut the columns under the existing tracks and trains kept flowing above,” Baldassarra says. “Nothing like this has been done in Canada before or since.”

The dig-down concept made it possible to allow for the construction of a concourse similar to airports, which didn’t exist before; separated the passengers from the construction taking place; and created a new commercial floor for food and concessions, as well as retail.

“We dug down three metres underneath Union Station and then we brought in four steel columns and dug them into the ground around each existing column,” Baldassarra explains.

The four steel columns braced the concrete slab above, allowing the construction teams to take the load off the original  concrete column.

“They were able to cut the column, because the four steel columns around that column were taking the full load,” Baldassarra says. “Then after we cut the column, we got rid of the original footing. Then, we dug down three metres underneath that column, and poured a new foundation for the extension of the column. We put in the rebar for the round column and poured the new column underneath the old column 16 or 17 feet under the old column to support the original. In the meantime, the original column was just dangling there.”

After the new footings were down more than three metres, the four steel columns and bracing were removed. While all this work was going on, sensors were placed throughout each column that were monitored 24/7 for any potential shifts or movements caused by the trains above. Baldassarra says that the largest amounts of force that caused reason for concern wasn’t the sheer weight of the slabs or the trains.

“The weight on the column wasn’t the highest load, it was the lateral breaking force of the trains above,” Baldassarra says. “Because the tracks are very close, you could have three trains breaking all at once over the column, and that force was huge compared to the dead load of the train being on top.”

There was concern because the original concrete was poured in 1920. The structural engineers didn’t want more than a 1/4-inch movement vertically.

“The structural engineers took turns monitoring it. The information was sent to their cell phones. If the alarms went off, they would head down to the site, because the work was 24/7. But none of the alarms went off on the 280 columns that were cut,” Baldassarra says.

“The city will profit from this, once the space is fully leased out,” Baldassarra says, adding that Metrolinx also purchased the area of the station it operates within, which is another benefit to the city. “Once we get through this pandemic, and the commercial, retail and food reopens below, Osmington is really going to turn this into a destination for commuters going through the building being able to use it as a destination.”

City of Toronto’s Frank Molinari, project director for major initiatives and strategic projects, says that the biggest challenge related to the project was keeping Union Station fully operational throughout the construction.

“Despite the complexity, the station never stopped operating. Train service continued on schedule. The city was going to make sure we weren’t going to disrupt the service,” he says. “We were in constant communication with the stakeholders—Metrolinx, VIA, Osmington—and the general public and the commuters.”

To keep all parties up to date on the status of Union Station and the revitalization project, a host of tools were utilized.

“We had websites, radio announcements, all kinds of things where people could find out what’s going on at Union Station,” Molinari says. “I think the focus on communication helped alleviate some of the things that could make it difficult to work down there.”

Maintaining and revitalizing the original design and structure of Union Station’s Great Hall was a main priority, while ensuring the infrastructure was upgraded with everything needed to properly service the current 65 million commuters using the station annually, as well as be equipped to handle the 130 million commuters projected to use the station annually in 2030.

“This is a heritage building and I think it was a challenge to know what we could and couldn’t do in terms of the construction—what we could demolish and what we had to keep and refurbish,” Molinari says. “The way we overcame that is we had a heritage consultant on board we worked with on a regular basis to work with Heritage Canada.”

“We not only rejuvenated the entire building, but we’ve completely contained and restored the grandeur of the 1920s Union Station. The Great Hall has been completed restored,” Baldassarra adds.

That said, not all original designs and uses for the station made sense to remain entirely in their original forms. One prime example of underutilized space that got much-needed work performed was the moat.

“The moat used to be the carriageway for horse and buggy for Union Station,” Baldassarra says. “At one point it was used as a parking area for rental cars, which was not a good use of space. It’s now been covered over and is going to be a very vibrant passenger walkway with cafes once it’s reopened. The re-use of the moat is something people are going to be really impressed with. It will be filled with tables and food service throughout, and it’s totally covered in high-end glass design.”

“That’s a beautiful aspect of the station itself. It has glass that has been covered on the north, east and west. It protects the commuters from the weather. Essentially, when you get off the train you can go as far as Dundas Street and Bay Street and not have to go outside now,” Molinari says.

Despite the many challenging projects that Baldassarra has worked on over his career, he says he can benefit from his experience throughout the 11-year construction and revitalization of Union Station.

“For me, it’s about the continuation of staging and phasing buildings that needed to remain operational during construction. I think that’s something you have to do repeatedly to really try and understand how to do. Not everyone can do that. It truly is a design process,” he says.

Where does this project rank in Baldassarra’s impressive career? Very high.

“This one is a special one. To reinvent buildings like this is a one-time thing. Doing a brand-new building is easy compared to doing a building like this,” he says. “Frank and his group have been really great to work with, and all of the people before him. It’s been a very difficult project for the team at the city to manage their way through, but they’ve navigated their way through it.”

As for Molinari, he really enjoyed watching everything come together.

“I’m a construction guy. I like being on site and going through the progress.  I really liked the renovations as well, so getting to see how the work progressed and the coordination of all this, that was absolutely amazing.”