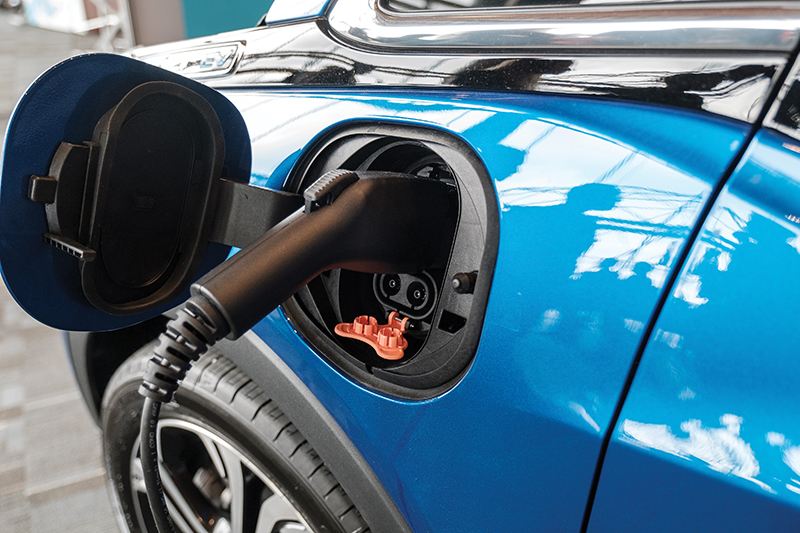 The introduction of new, more affordable, electric vehicle (EV) models has many Canadians seriously considering making the leap to electric. The vehicles are ready, but what about the charging infrastructure and electric grid?

Transportation accounts for a quarter of Canada’s greenhouse gas emissions (GHG), of which almost half comes from passenger cars and light trucks. The sooner we can make the jump to electric, the better positioned we will be in achieving our net zero goals. But at the same time, electric cars made up just under four per cent of all vehicle sales last year, according to Statistics Canada—even as Canada set a mandatory target for all new cars and light-duty trucks sold in the country to be zero emissions by 2035.

During a recent INFRAIntelligence webinar, ReNew Canada discussed with a panel of experts some of the obstacles and opportunities facing EV infrastructure. What’s the timeline? And is it time to buy that EV you’ve had your eye on?

Where are we headed?

The good news is that EVs are increasing in popularity. According to the latest report from Statistics Canada, registrations of battery electric and plug-in hybrid vehicles surged 89 per cent in the second quarter of 2021.

During the recent federal election, the Liberals campaigned on a platform that included spending an additional $700 million to create 50,000 new electric- and hydrogen-charging stations. If the government makes good on that promise, it will give Canada’s infrastructure a big boost.

But according to David Adams, president of Global Automakers of Canada we have a long way to go.

“We would probably need to look at something in the neighborhood of around $10.5 billion for our infrastructure over to get to 100 per cent ZEVs by 2035,” he says. “So, while the amounts that feds have announced sounds impressive, it’s still probably not enough to get us where we want to go.”

Planning a rational deployment of that type of infrastructure is going to be very difficult, adds Stephen Beatty, vice president with Toyota Canada.

“It’s like water in a bathtub. The EV supply is sloshing back and forth across the country, whether that’s for plug-in for battery electric, or whether it’s for hydrogen production for fuel cell vehicles.”

Where EV infrastructure will or should be located is another issue, says Cara Clairman, president and CEO of Plug’n Drive, a non-profit organization committed to accelerating the adoption of electric vehicles.

“About 80 per cent of EV owners plug in at home at night, but it gets much more challenging the more rural you go. For people commuting in urban areas, it’s relatively easy, but for folks who are trying to make a more remote trip,  it’s still pretty tough.”

The biggest requirement is that a very comprehensive strategy around how this charging infrastructure is going to be built out is needed, says Ryan Robinson, research leader, with Deloitte’s automotive sector.

“If it’s just who can write the best proposal to gain access to a pot of money, that’s not going to get us to where we need to go, because what we’re going to end up with this monster that doesn’t have any organization to it, and we run the risk of putting chargers in place where they’re not needed, or not having the nuanced conversation around the fact that from an affordability standpoint, people also need financial assistance with the charger itself.”

Battery technology itself will also be an issue, says Robinson. “Because there’s a real risk that we could end up with a ton of money being spent on chargers that just aren’t going to be relevant. We know that battery technology right now is really in its nascent phase, and we’re expecting tremendous amounts of gains on the technology itself. And how that’s going to have an impact on the infrastructure we need to be able to charge those batteries, is another conversation that needs to happen right now.”

But in even in large cities like Toronto, publicly accessible plug-in options are needed, says Adams, who like many only has street parking available.

“I don’t have access to my garage, or any other charging station close to me, so I’m completely reliant on the public infrastructure.”

He says a lot of work that needs to be done in that existing physical infrastructure space, whether that’s through amending local bylaws and building regulations, such as the City of Vancouver is doing.

“I think B.C. and in particularly the city of Vancouver have done a better job at trying to at least create the environment to facilitate the adoption zero-emission vehicles.”

Unfortunately, the building codes across Canada are quite inconsistent, adds Clairman.

“There should be something more consistent across the country to model what Vancouver does,” she says. “Which just requires rough-ins for EV charging when a building is being constructed. And of course, it’s so much cheaper to rough it in when you’re building, rather than to try to retrofit. So, let’s do it when it’s cheapest—when you’re designing and.”

For Robinson, we might be getting a little ahead of ourselves, as the demand for EVs, while on the rise, is still far behind internal combustion engines.

According to recent research from Deloitte, only about 16 per cent of consumers in Ontario say they’re ready to make the leap into full battery electrics.

“And to go from 16 to essentially 100 per cent over the next decade, means we still have a very long way to go on this journey,  in a very, very short period of time.”

What’s holding them back is affordability, says Robinson.

“You’ve got 76 per cent of consumers that are intending to buy an electrified vehicle that want to spend or are expecting to spend less than $50,000.

“It’s a psychological barrier for people.”

Some jurisdictions are treating EVs as economic development, according to Clairman, who points to a program in Ontario’s Bruce, Grey and Huron counties. She says the Nuclear Innovation Institute’s Clean Energy Frontier program is ahead of the curve and aims to bring in more tourists to the region, while enhancing their EV infrastructure.

According to a recent report produced by the program, a strategic approach is needed by the area, which is one that relies on transportation and tourism by “passenger vehicle.

“EV drivers are affluent, travel often and prefer to travel to places where they know they will be able to access a reliable network of public charging stations,” read the report. “Unfortunately, more than 80 per cent of EV drivers currently believe that accessing charging in Bruce, Grey and Huron will either be difficult or very difficult.”

The report recommends the region “develop a clear and coordinated strategy for installing EV charging capacity across the region and that individual municipalities transportation planning should include commitments to public charging infrastructure enhancements, including leveraging the federal government’s Zero Emission Vehicle Infrastructure Program, and collaborate where possible to reduce installation costs.”

Beatty is experiencing a similar experiment in Bancroft, Ontario, where he has a residence and where chargers were recently installed, including a Telsa Supercharger.

“And one of the things that’s happened as a result of that is we’ve brought EV drivers into the community, and it’s a community that relies very heavily on tourism,” he says. “I’m not sure that this was ever the intent, but what it’s done is it’s brought new types of tourist traffic into the area because they have the infrastructure in place to support it.”

It’s doing a couple of things, according to Beatty. One is, Tesla owners tend not to be entry level vehicle buyers, so they bring with them higher disposable income. The second part is getting that concentration of people operating with electrified vehicles in more rural communities,  demonstrates that it’s possible.

In the larger picture of getting to net zero, EVs, particularly the batteries themselves, have another role to play, says Clairman. Through mobile storage and second life uses, EV batteries could create value for EV owners, workplace buildings, and the electricity system.

“EVs are not just cars, they are batteries that can store energy for the electricity system,” she says.

Plug’n Drive produced a report that examined the potential for using EV batteries as electricity storage options to contribute to Ontario’s electricity system and assesses the value that EV owners may realize by supporting such use. Besides driving the car, EV batteries have two other potentially useful applications: mobile storage while they are installed in the vehicle, and second-life storage after the vehicle batteries are retired.

The report found that the best way to capture the value of mobile storage from a large number of commuter vehicles is at workplaces categorized as Class B electricity consumers. EV batteries could deliver value to several stakeholders through these uses, including EV owners, workplace buildings, and the electricity system.

Altogether, there is a potential for $38,000 in benefits per EV over its life, contributing to up to $129 million/ year of benefits to the electricity system by 2035.

The race is on

While the year 2035 seems to loom over the push to increase the use of zero-emission vehicles, putting an exact timeline when we’ll see widespread sustainable electric vehicle infrastructure in place is elusive.

“I think it’s a race,” says Beatty. “As long as people see economic opportunity out of it, then this is beneficial. To the extent that people feel they’re being forced into it, then that reluctance is going to hold people back from making those decisions about investment infrastructure.

[This article originally appeared in the January/February 2022 edition of ReNew Canada.]

Featured image: The good news is that EVs are increasing in popularity with registrations of battery electric and plug-in hybrid vehicles surging 89 per cent in the second quarter of 2021.  (BC Ministry of Transportation and Infrstructure)