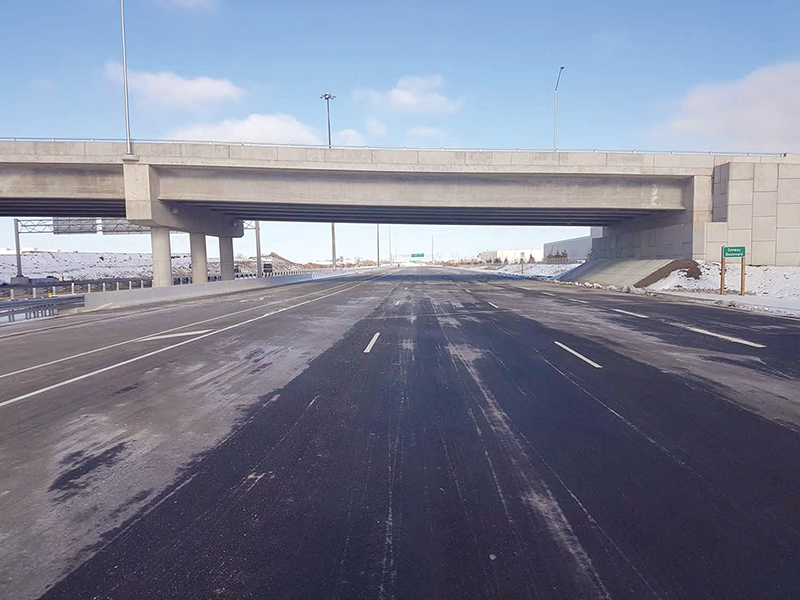 Four years ago, a small army of heavy equipment operators on backhoes and bulldozers began removing trees, shrubs, logs, fallen timber and other surface litter from along the corridor of the future Highway 427 Extension between Finch Avenue in Toronto and Major Mackenzie Drive in Vaughan.

It was tedious work and took several months for crews to fully clear the land. But by the end of 2018, work had started on installing culverts and crossings and building bridges along the 10.6-kilometre route.

Today, the $616-million road widening and expansion thoroughfare is fully open for business. The announcement was made this past fall by Ontario Transportation Minister Caroline Mulroney who noted that the road will help improve traffic flow, reduce congestion, and move people and goods safely.

“As part of our vision for the Greater Golden Horseshoe, our government is investing in highway infrastructure to address congestion and keep up with the growing needs of Ontarians,” she proclaimed.

It hasn’t all been smooth sailing, though. There have been a few hurdles along the way, namely COVID-19. Construction on the project proceeded during the pandemic, but under measures and protocols set by the province. At the end of the project, meanwhile, a dispute arose over the finished product that delayed the opening of the highway by several months. A lawsuit was filed by the contractor, LINK 427, against Infrastructure Ontario and the Ministry of Transportation (MTO) that remains unresolved.

The highway, a heavily used north-south commuter route from Toronto to the City of Vaughan and neighbouring communities, is reportedly saving motorists nearly an extra half hour of travel time per round trip during peak periods compared to driving along parallel municipal roadways, according to the province.

“The Highway 427 expansion will greatly benefit the people of Vaughan-Woodbridge,” Vaughan-Woodbridge MPP Michael Tibollo said in a statement. “Not only will it help take vehicles causing crippling gridlock off our local roads, but it will also make our community safer while reducing travel times for commuters and commercial vehicles. Most of all, it means the creation of new opportunities like we have never seen before.”

There are two main sections to the project.

Work took place concurrently at different locations along the section between Finch Avenue and Highway 7. The consortium took a more linear approach to the build on the expansion section of the highway.

The bridge work was complex. Installation of concrete girders on many of the structures along the route began in 2019. Piles and footing had to be installed, followed by abutments and piers, concrete decks, and asphalt roadway. The girders used over Rainbow Creek are more than 45 metres long and some of the longest ever constructed in Ontario.

Decks on the bridges are made of poured concrete that connects the top of the bridge structure to the girders and the rest of the bridge.

See also  The Next Procurement Evolution

The structures most commonly used along the expansion are integral bridges, which means the deck of the bridge is contiguous with the approach slab. This method is deemed to be better for long-term maintenance of the bridge, especially during winters, as the slab provides a transition between the road and bridge abutment.

Interestingly, in June 2019, one of the existing bridges along the route at Albion Road was moved six metres to the west over a single weekend. A Self-Propelled Modular Transporter (SPMT) machine was used for the move. The consortium had planned to demolish part of the bridge and build a new portion on the other side, as the location conflicted with the overall Highway 427 widening work. However, LINK 427 took a different approach. Since the existing bridge was in good condition, contractors decided moving it was the best approach.

“Moving the bridge was necessary so that the new eight-lane highway could be built,” Jim Faught, a spokesman for LINK427, explained this past summer. “LINK427 decided to use a value-engineering approach instead. Since the existing bridge was in good condition, LINK427 determined this approach would be the most effective method to move the structure.”

The consortium chose to move instead of demolishing the bridge because it meant the roadway was not out of service for long, it was a novel way to reuse the existing infrastructure and therefore reduce waste.

Crews began work on a Friday night. The process involved disconnecting the top of the bridge from the walls and footings. The SPMT was then used to move the structure and set it down in its new position. The project was built using a public-private partnership, or P3 model. All projects valued at more than $100 million must go through an assessment to determine whether to use the P3 or traditional procurement. The assessment looks at project characteristics and objectives and chooses a delivery model based on such criteria as protection of the public interest, value for money, and appropriate public control.

Despite the precautions taken, there have been legal troubles. Opening of the highway was delayed when LINK427 filed a statement of claim, alleging that the government changed the rules during the project and was abusing its power to force the consortium to do costly last-minute upgrades  without compensation.

According to the claim, the province withheld a substantial completion payment of $144.8 million because the road was not built to specifications in the contract. There were concerns about gradients on the highway which allow water to drain off to the sides. Claims made in the lawsuit have not yet been tested in court.

Neither side is commenting on the dispute. However, Infrastructure Ontario confirmed earlier that LINK427 withdrew its claim and has agreed to deal with the matter by non-binding arbitration rather than in court.

A request for comment sent to Minister Mulroney’s office was not acknowledged and Lee Alderson, senior issues advisor at the MTO, replied to questions with an emailed statement that said, “The Ministry of Transportation has no comment beyond what can be found in the Ontario news release for the opening of the 427 Highway Extension earlier this fall.”

Infrastructure Ontario also responded to a request for an interview with an email from communications advisor Mary-Lynn Smith that stated they decided not to go ahead with an interview at this point in time.

Meantime, Jorge Gomez-Perez, CEO of LINK427, responded to a request for an interview with an email indicating he decided not to go ahead with an interview at this stage, but would be happy to revisit the matter in late spring or summer 2022.

Grant Cameron is an award-winning journalist and communications professional based in Burlington, Ontario.

Featured image: A view of the new Highway 427 extension northbound at the Zenway Boulevard overpass. (LINK427)

Ontario awards contract to widen Highway 11/17 between Thunder Bay and...