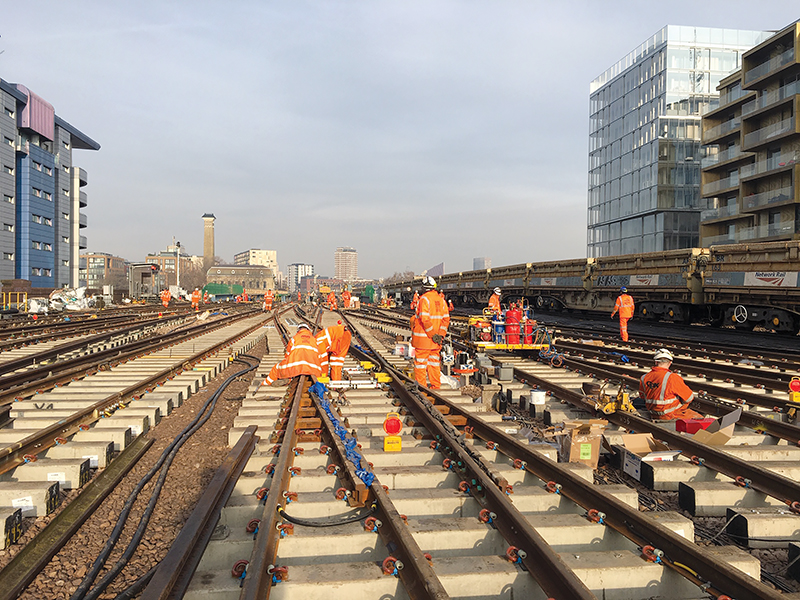 Network Rail owns, operates and develops the United Kingdom’s highly utilized railway infrastructure which includes over 32,000 km of track and 30,000 bridges, tunnels and viaducts, as well as thousands of signals, level crossings and stations. When system improvements are needed, they are most often performed under challenging conditions in constrained environments with restricted access.

In 2019, Network Rail established the South Rail Systems Alliance (SRSA), a 10-year £3 billion (CDN-$1.76B) agreement between Network Rail, Colas and AECOM, for delivery of railway system renewals across three Network Rail Regions in the south namely, Anglia, Southern and Western & Wales. This extensive enhancement program made up of complex infrastructure projects is being delivered under an alliance contract where all parties are aligned under key performance metrics and a best for project approach that’s geared toward generating continuous improvements and successful outcomes.

Building on prior accomplishments

Network Rail, Colas and AECOM had previously delivered all junction renewals under a successful alliance arrangement in a similar geographic region over a six-year period. The scope on this subsequent SRSA alliance now involves incorporating the collaborative and continuous improvement approach established under the previous contract to embrace a wider scope of work on plain line track renewals over a 10-year period.

The alliance form of contract on these projects was based on one that AECOM helped to evolve in Australia in the early 2000s. The commercial framework is constructed with commercial arrangements and contractual terms where all parties are aligned to achieve a common goal with an appropriate sharing of risks, a no blame culture, and an integrated team making unanimous decisions.

The alliance charter for the SRSA includes a collective sharing of risks and a win/win/win arrangement, meaning there is a common goal, all parties have the best interests of the SRSA at the centre of everything they do, and collaboration underpins all business.

The SRSA is based on a target cost model with a pain/gain mechanism. Target costs are jointly developed and agreed upon between participants with a commitment to an open book approach and external audits. There is a commitment to resolve any disputes within the alliance and without legal recourse in the event of disagreements. A ‘no blame culture’ established under the alliance has been fundamental to its success.

The SRSA has an integrated project team where the best person is selected for each position, irrespective of parent company. Wherever possible, project teams are co-located in offices and depots at strategic locations around the regions.

There are efficiency targets which translate into the SRSA becoming more competent each year. These are built into contract rates, along with a pain/gain mechanism to incentivize SRSA participants and drive efficient working. Efficiency workshops led by our transformation lead are regularly held to explore and implement efficiency initiatives, and monthly continuous improvement workshops are held for each discipline. All design, assurance and construction staff are in attendance, leading to more effective communication and project delivery.

Safety excellence is also paramount and is a performance indicator in the SRSA contract. Led by the alliance director, the safety culture is cultivated from the top where regular safety conversations and weekly safety calls occur with the alliance team. Alliance boot camps, safety briefings and the alliance safety app—designed for project members to easily track close calls—are just some of the initiatives and tools that the SRSA uses to drive continuous safety improvement.

Success of the alliance has been founded on a tender process that included considering the participants’ approach to collaboration and their demonstrated collaborative behaviours. It was therefore essential that the selection process favour companies and individuals who could operate effectively in the alliance environment. This meant that the evaluation process needed to include tools that allowed behaviour to be assessed at an individual and company level.

The overall aim of the process was for the Network Rail team to observe and experience what it would be like to work with the people they ultimately select for the alliance.

The program team has been able to realize a broad range of benefits from the alliance approach. Late handback of renewals works has been virtually eradicated, removing unplanned disruption penalty payments to train operators. As track quality has significantly increased through progressive assurance techniques, the Alliance is handing sites back to rail traffic at up to 125-mph full line speed, benefitting the passengers with shorter planned disruption.

SRSA has been recognized within the rail industry for exceptional performance and won the Engineer of the Year Award and Rail Civils / Infrastructure Team Award at the 2019 UK Rail Staff Awards.

This contract is also being successfully used to instruct a number of additional enhancement works including High Speed 2 preparatory works at London Euston Station and the new station site at Old Oak Common; plus major track remodelling schemes and early development programs of work that ultimately feed into the core contract works.

John Longthorne is the director of major projects for the U.K. and Ireland with AECOM.