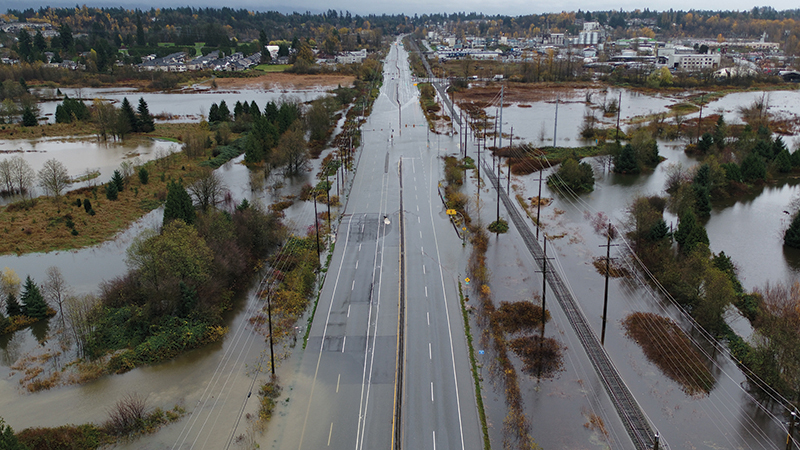 Climate change impacts could leave Canadians physically and financially under water as a warming and increasingly volatile climate damages public and private infrastructure. Buildings and critical infrastructure are all at risk unless new investment and improved regulation make these assets more resilient to the changing climate.

During a recent INFRAIntelligence webinar, ReNew Canada brought together a panel of experts to discuss the impact climate change is having on infrastructure across the country and how adaptation and mitigation may point a way forward.

ReNew Canada: What type of infrastructure is most at risk from climate-related events?

Ryan Ness, adaptation research director, Canadian Institute for Climate Choices: So, we know that flooding, wildfires, and more extreme storm events are going to be some of the primary hazards for infrastructure in terms of disasters, and those intersect with transportation infrastructure that frequently gets flooded or impacted by changing temperatures as well, in a less disaster-oriented kind of way, but transportation is very much front and centre.

John Gamble, president and CEO of the Association of Consulting Engineering Companies (ACEC) Canada: It’s not a case of one or the other, infrastructure is all interconnected. The municipal infrastructure is almost an ecosystem unto itself. The risk is the weakest link in the chain, and that’s where we have to start. If we can’t access a site, we don’t have supply chains and that cascades into other issues. If we don’t have potable water, you’ll have health and safety issues. So, it’s not a case of choosing which assets to focus on, we must look holistically at the suite of infrastructure assets and then prioritize on that basis.

And in fact, going forward, we need to recalibrate, so we’re not looking at infrastructure investment or deferred maintenance on an asset-by-asset, project-by-project basis. We must look at asset management plans in their entirety and at how these things are interconnected. And then we look at how different infrastructure assets from different communities are interconnected. It doesn’t help you a lot to do flood control if the community upstream hasn’t done a whole lot about it either.

Elise Pare, national practice lead for Climate Change and Resilience, with WSP Canada:  If we look at increasing the resilience of infrastructure on a project-by-project basis, we run the risk of creating islands of resilience, where you might have one site that’s doing great, which has detrimental impacts to neighbouring sites. And so, it’s also important that we think about some of our vulnerable populations, which may be located in some of these floodplain areas that have been historically less expensive to build in, and that don’t have the ability to respond or go to somebody else’s place during a big flood event.

I also think that as we look at systemic land use planning, we should also think about what the consequence of failure is and where it is going to fail, if it does? We saw this with the flooding in the Lower Mainland here in B.C. last year where nature reclaimed areas. Sumas Prairie was a lake, and we decided to try to control it with a dam and pump station, and what happened during that disaster? It became a lake again.

Dr. Quentin Chiotti, practice lead, Climate Risk and Resilience, with Matrix Solutions Inc.: Water is probably the most significant climate risk for the country as a whole. You can’t ignore the fact that there are many aspects of climate change that will have impacts in their own right, and of course, the interconnections between them as we found out in British Columbia, where it was largely a sequence of drought, fires, and then months later, with that scorched landscape with the vegetative cover removed, the precipitation exacerbated by the lack of vegetative cover caused washouts and flooding.

ReNew Canada: Who has to make this tough decision on which type of infrastructure we focus on first, or is it about implementing at a policy level, before we start putting shovels in the ground?

Elise Pare: As an engineer, I look at it from a codes and standards perspective. I would like to be told that the box is changing, because you typically design within a certain set of parameters, and sometimes you only actually have influence over the project that you’re working on. That way, unless that high-level strategy changes, you’re not going to get to that detailed level, and the details are not going to be that effective.

Ryan Ness: We’ve seen a decade or more of bottom-up effort by municipalities and other local actors trying to move the resilience yard stick on their own without a supportive national or provincial vision, or system of policies to support that activity. It’s a nested thing: Priorities need to be set nationally, provincially, and regionally and then locally, but I think at this stage, we’re seeing a big gap at the federal and provincial level identifying what infrastructure is most important to prioritize, both existing and future?

And then, what are the tools that those governments need to be able to advance resilience and adaptation? What can they do to enable the actors like municipalities that are responsible for deploying most of this infrastructure and building much of it as well? The top of the hierarchy really needs a lot of work.

John Gamble: What could have a very positive impact is changing our approach to how we fund infrastructure. Typically, with the cost sharing model, it’s a project-by-project application, and it’s a bit of a beauty contest. Why are we not leveraging the asset management plans?

Instead of having 10 projects you’d like to execute over the next 30 years and then having to get in the queue with your application each year, where you may or may not get funding, why shouldn’t we tailor the funding philosophy to committing to support a certain percentage of the asset management plan over the following number of years?

Quentin Chiotti: I think there’s merit in terms of an overall national or provincial strategy, but extreme weather and evidence of climate change has been around for a while. I’ve been at this for 30 years, and if you go back to the Calgary and Toronto floods in 2013, I remember my former position was created largely because of a GO train that was underwater. So, I think we tend to be a reactive society.

We need to be more proactive, whether it’s municipalities mandated in terms of their asset management planning or within the private sector. Both need to be held accountable by shareholders and others in terms of demonstrating their climate risk, whether it’s from a transitional perspective on emissions or physical risks. We need to act now, and perhaps put more emphasis on carrying out climate risk assessments, and better understanding what those risks are before we wait for someone else to solve the problem.

ReNew Canada: What’s it going to take to develop an integrated approach to build resilience into Canada’s infrastructure?

Elise Pare: This is a complex problem that we’re trying to resolve and that takes different perspectives to come up with innovative solutions, so it’s important that we keep the dialogue open between different disciplines—from planners to engineers, to ecologists, to accountants and insurance professionals—and include those people at the table and have those open conversations.

Quentin Chiotti: Do we have enough information in order to make decisions? And I think for the longest time, we have. So, I would say whether or not it’s the tools, the expertise, or the data, we’ve made great strides in being able to have all the information to make strong sound climate risk decisions.

Ryan Ness: Senior government officials need to do more than they’re doing to drive the practice of building disaster and climate risk into infrastructure. There are so many more things and so many more tools available to governments through regulation, through funding requirements, through disclosure and infrastructure asset management requirements and support for those ultimately too, that they can do to help move this along.