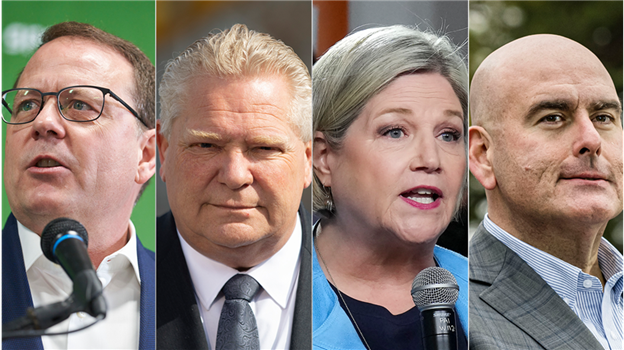 By John Allen and Jess Neilson

A lot has happened since the Ford government came into power in 2018. A global pandemic that stretched healthcare to breaking point, decimated transit ridership, and shifted teaching and other public services online, have significantly changed the landscape. Going into the June 2 election, all parties have put infrastructure at the heart of their promises to the electorate, with each party trying to outdo the other with the scale of their ambitions. Matching those ambitions may prove to be the biggest challenge for the winner given the escalating labour and material costs that have come largely because of the pandemic.

The early days of the Ford Government may seem like a long time ago now. Early decisions to cancel renewable energy contracts and cut the size of Toronto City Council understandably raised concerns across the sector that infrastructure projects already well progressed may be on the chopping block. With a couple of exceptions, the Progressive Conservatives continued to move the projects forward that had been advanced by their Liberal predecessors. The Hamilton LRT was initially cancelled, but then revived post-pandemic. Halton courthouse became an apparent victim to a new way of conducting judicial business online. Other projects received haircuts to demonstrate the fiscal responsibility the PCs had made their mantra, the Hurontario LRT being an example.

Although the approach to delivering transit was met with criticism from other parties and municipal governments at the time, the Ford Government did make considerable progress on a number of transit projects. Most notably breaking ground on the Ontario Line, which had been on the table in different forms since 1910, but was almost perpetually bogged down in municipal-provincial squabbles. The Building Transit Faster Act helped reduce major risks around projects covering areas such as utilities and environmental assessments that tend to cause to project delays and cost overruns. Their work around transit-oriented communities to leverage the huge transit investments to unlock development around stations was also a significant step forward for a Toronto region short on housing and choked by congestion.

See also  The Road Ahead

Heading into the election, transit and roads, health and care, and education are the big infrastructure themes that cut across the priorities of all the main parties. Housing has also become a key battleground with parties coming to realize that the many policies nibbling around the edges to support buyers were in many cases adding fuel to the fire of house price rises, and the only solution is to build, adding more capacity concerns to a construction sector already running at full speed.

In an early campaign announcement, Liberal leader Stephen Del Duca committed to not cancel any funded and approved transit projects. The NDP also makes little mention of transit projects underway, instead focusing on throwing its weight behind greater investment in regional transit across South-West and Northern Ontario. The Liberals threw out an extensive list of projects promising to close transit gaps across the province, including re-tabling the Waterfront LRT for Toronto and a commitment to high frequency rail extending into Southern Ontario.

The announcement that captured most interest was the buck-a-ride promise announced by the Liberal Party, although met with scepticism by transit planners it may resonate with voters anxious about rising gas prices while promoting transit ridership to pre-pandemic levels and reducing emissions. The PCs for their part unveiled a regional transit plan prior to the election that includes a major program of transit lines, and conceptual plans for a new east-west line from Burlington to Oshawa across the North of Toronto and expanding the Ontario line into a loop connecting regional transit hubs. The budget also doubled down with promised extensions to existing lines, including a GO extension to Bowmanville, an airport link for the Eglinton Crosstown, and an extension to the Sheppard subway.

See also  No Project Too Small

In the maelstrom around the election, you would be forgiven for thinking the PCs want to build roads everywhere, and the Liberals and NDP want to stop any project involving asphalt. Much of this stems from the discussion around Highway 413 linking Halton to York, which the PCs committed to moving forward prior to the election and the Liberals, NDP and Greens have pledged to cancel.

In truth, all parties have committed to sizeable investments in roads around the province. The PCs have provided $25 billion over 10 years for highways including a major expansion of Highway 401, which the Liberal Party has also promised to undertake. Across the board, the NDP, Liberals and PCs all promise to expand Highway 3, the Morriston Bypass, and Highway 7 between Kitchener and Guelph.

After the pandemic, health understandably is a focus with all publishing lists of exactly what communities would get a new hospital, or at least get some investment into rehabilitation or expansion projects. In their last budget, the Ford Government committed $40 billion over 10 years to hospitals, a significant increase on previous commitments and a measure of the impact the pandemic had on straining the health system. The NDP pledged to increase hospital funding, and the Liberals promised 3,000 new hospital beds.

Encouragingly all parties are also looking at solutions in the broader care sector to take the strain of hospitals. The PCs embarked on a rapid build program for long-term care homes they are looking to extend, with a promise to deliver 30,000 net new beds by 2028 and 28,000 upgraded beds.  The NDP for their part has set a target of 50,000 new long-term care beds. The Liberals matched the PCs in a commitment to 58,000 beds in total, as well as 15,000 new assisted living homes, and a focus ion improving home care.

The state of the province’s schools was bought into sharp focus with the pandemic with the quality of aged buildings’ air conditioning becoming a topic of interest to parents hoping to escape the trials of home learning. The PCs promised $14 billion over 10 years to expand and renovate schools, they also made mention of expanding their rapid build program to accelerate some of the work. The NDP promised to close the $16.8 billion repair backlog within 10 years and to make school buildings carbon neutral. The Liberals promise the largest investment to repair and build schools in the province’s history, with an extra $10 billion on the table.

Traditional electoral lines of spend versus save have shifted when it comes to infrastructure. All parties have committed to maintaining large investments and long lists of proposed projects as a way of winning over voters. With a lot of money on the table for public infrastructure, a hot construction market for housing, and volatility in material costs, it will be a challenge to deliver these ambitious investments for whichever party wins the election. To all the parties’ credit, skilled trades feature prominently across all platforms, and with looming skills and labour gaps, that focus is much needed. Beyond that, the winner will need to focus heavily on areas like procurement and contract management. These are not areas that voters scour political platforms for, or that plaster front pages, but in the current rising cost environment, they will become increasingly important to maintain the momentum of previous years.

Jess Neilson is a consultant in the Transportation, Infrastructure and Communities practice group at Global Public Affairs.

Healthcare at the heart of city-building in Vaughan