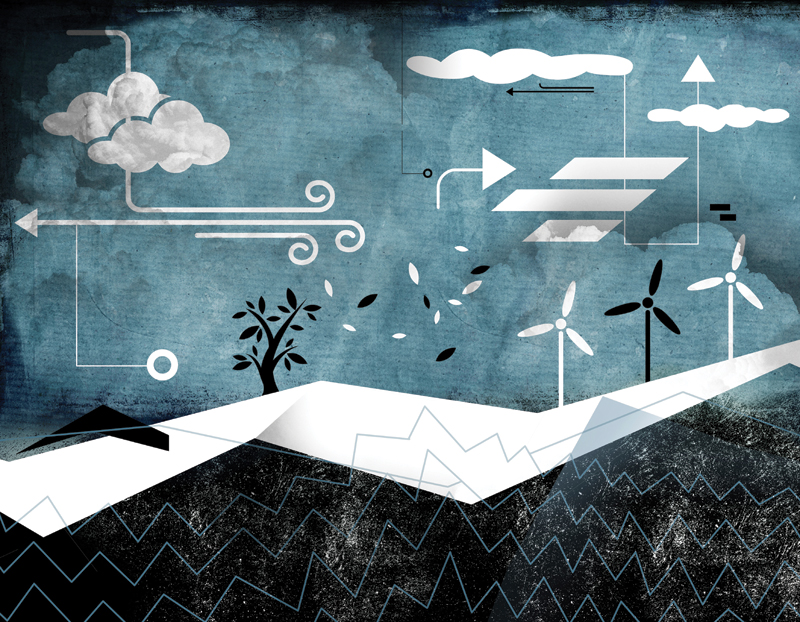 Ontario currently leads the country in wind power capacity—and some southern Ontario communities are none too pleased by this development. There is a belief among some people who reside in close proximity to wind farms that the turbines are causing health problems and driving down real estate prices. The issue of property devaluation was recently brought to the province’s Superior Court of Justice, the result of a 2011 lawsuit launched by John and Sylvia Wiggins of Simcoe County against WPD Canada Corporation, a Mississauga-based wind power company.

Trouble began when WPD began seeking environmental approval for the construction of the Fairview Wind Project, an eight-turbine system with an 18.4 MW maximum capacity to be raised in Clearview Township. According to the Wigginses, the announcement of the project drove down the value of their 48-acre horse farm significantly. By April 2012, 15 other Clearview landowners had joined the Wiggins’ case with similar complaints, while a further five had launched a separate suit. The value of the two claims exceeds $17 million. The Wiggins lawsuit also includes, as defendants, two area farmers who have agreed to host the turbines.

A year later, on April 22, 2013, Justice S.E. Healey issued a summary judgement dismissing the landowners’ claims. She stated that that the plaintiffs were unable to “prove that they have been wronged by the defendants,” in part because the project had not yet been approved by the Ministry of the Environment. At WPD’s request, Healey had accepted the plaintiffs’ evidence into the record without challenge in order to establish whether there were legal grounds for the claims.

Despite the dismissal of the claims, some anti-wind power advocacy groups have taken solace in the court’s decision, and in Healey’s post-decision statement. Wind Concerns Ontario (WCO), an anti-wind advocacy group, has stated via press release that “the judge accepts unreservedly that property value is lost for neighbours of these power projects based on the evidence.” Jane Wilson, WCO’s president, believes the court’s decision has given hope to others who might be affected by the construction of wind power projects. “The court accepted,” she said, “that property values near wind power projects can drop by as much as 22 to 50 per cent. People are not going to just sit and let that happen to the biggest investments in their lives: their homes. Before now, to sue for a nuisance you had to wait until it was already constructed, but then the damage is already done. In this case, the court is accepting that property values may be affected at the time of approval.”

Cunningham and Gillespie LLP, the firm representing the plaintiffs, also issued a press release lauding the judge’s statement. Eric Gillespie called the ruling “a major step forward for people with concerns about industrial wind projects across Ontario. […] Dozens of plaintiffs who have already started actions appear to have had the right to bring claims validated. We can definitely expect more claims now that this door has been opened.”

But despite the optimism shown by the plaintiffs and anti-wind advocates, there are those people who suggest the ruling has been mischaracterized. Benjamin Thibault, legal and policy analyst at the Pembina Institute, disagrees with claims the ruling holds any weight for future cases. “For the purpose of the decision,” he explains, “the judge looked only to the plaintiffs’ evidence, in order to test if they could ever win even on their version of facts. What the plaintiffs’ lawyers have said about the decision is true to the extent that she accepted their evidence for the purposes of this mental exercise, but saying that she ‘accepted the evidence’ takes it out of context and spins the decision as a victory for them. This case can be used as precedent only if someone brought forward another action at the same stage. Any claims that this can act as legal precedent for future cases at later stages of wind projects are patently wrong.”

See also  The Future of Renewables

WPD Canada president Ian MacRae expressed a similar point of view in a company press release. “The judge simply accepted into the record, as unchallenged, the unproven evidence submitted by the plaintiffs,” he said. “This evidence is not proof of the plaintiffs’ claims, and the decision does not suggest this.” The release also declared that the company would have challenged the evidence had the case proceeded to trial. “The fact is the Municipal Property Assessment Corporation (MPAC) is not currently altering property assessments in Ontario as a result of wind energy projects,” added Robert Hornung, president of the Canadian Wind Energy Association. “As a responsible industry, we continue to communicate with the Ontario Real Estate Association and MPAC to ensure we are reviewing all new and credible information on the important subject of property values.”

Wiggins v. WPD Corporation Canada is far from the only legal dispute involving wind power companies in Ontario. “There are other claims ongoing,” WCO’s Wilson says. “This is simply the first in the queue.”

With the wind power industry gaining steam, is there any way to resolve the tension between companies and municipalities? “There’s no silver bullet for solving this problem,” says energy consultant Stu Campana. “You lose efficiency as you move further away from urban centres, so it’s ideal to have the turbines as close by as possible. But the closer you get, the more backyards you’re going to hit. Including municipalities and allowing local stakeholders to have more of a say in projects is part of a larger solution. Part of the equation is education. The other is showing residents where the economic benefits lie. In the Netherlands, a study found that health complaints relating to turbines decreased substantially when people had an economic incentive to want them around.

“In other words, you’re unlikely to be bothered by a wind turbine if you’re getting something out of it.”

Clark Kingsbury is an editorial assistant at ReNew Canada.