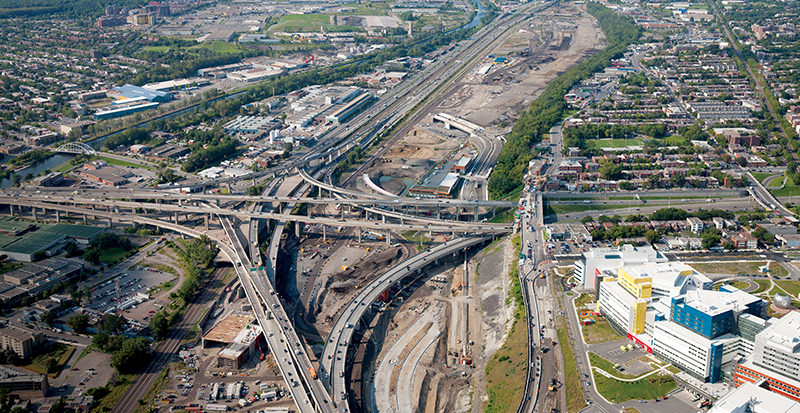 The Turcot Interchange, a major traffic hub in the Montreal area of Quebec, has been the site of large-scale project work since 2015. As project partners work to rebuild the interchange, WSP Canada’s environmental experts developed an innovative new tool to manage a highly complex aspect that is, quite literally, the foundation of the entire undertaking: contaminated soil remediation.

Today, the Turcot Interchange is a critical transit artery in the Greater Montreal Area, carrying more than 300,000 vehicles per day. It connects several key highways in the region, as well as providing the crucial link between the Pierre-Elliott Trudeau international airport and downtown Montreal.

However, the land it occupies wasn’t always the site of an automotive expressway; decades ago, the Turcot site was a different kind of high-traffic hub. Previously nicknamed the “Smoking Valley,” the Turcot site was for some time a maintenance and repair site for over 80 steam locomotives each day, along with other industrial activities that left a significant environmental footprint.

As the aging highway infrastructure approached 50 years of service, Transport Quebec initiated the large-scale, complex project of rebuilding the interchange, while keeping it open for public use. But one major challenge that quickly emerged was the presence of some significant soil contamination. There were still several organic contaminants of petroleum origin, in addition to residual materials such as combustion residues and other contaminants that do not meet environmental regulations.

WSP’s soil remediation experts joined the project team, tasked with creating collaborative and innovative solutions for soil management in order to improve the environmental baseline and meet regulatory requirements and client needs for the project.

Soil remediation was no easy feat during a project that was already highly complex and challenging. The length and high-profile nature of this unprecedented project, combined with the need to engineer the rebuild while maintaining traffic and mobility for the interchange’s 300,000 daily users, meant the project rehabilitation work would be a team effort of incredible magnitude.

With the project spanning such an extensive geographic footprint, there was a large amount of soil to dig out, remove, and even reuse. the team of experts and client partners relied on more than 3,000 soundings, from characterization studies of the last 20 years, to create a three-dimensional model of the area. They documented more than 35,000 data blocks representing the different layers of soil at the site, and used a Geographic Information System (GIS) to give the construction teams accurate locations of where to excavate soil. The team needed to update this data on an ongoing basis to continue to optimize the construction work and deliver on a fast-paced schedule.

While balancing these efforts, the team was also tasked with complying with environmental regulations to limit the ecological footprint of the project. In Quebec, there are critical legal requirements in force for rehabilitating contaminated sites, which constrain the degree of intervention to protect the surrounding environment.

In response to these challenges and the sheer scope of project complexity, the WSP team, in partnership with the client teams, developed a new system for tracking soil on the Turcot project. They needed a digital system that could meet the project timeline and budget, while also expediting the remediation work and providing timely updates and data access while on-site.

The team started with the existing database from the Quebec Ministry of Transport (MTQ) based on their environmental characterization historical work, and then leveraged digital technologies like mobile devices and GPS to make data accessible in the field.

All contamination work in the field is now completely paperless, and the consortium is also using GPS in the machinery. Every excavator is now equipped with high-precision GPS so that when digging into the soil, the operator has a visual aid and can access the data in real time, enabling them to know exactly which layer of soil they are working on. These GPS systems also tracked the soil by validating its origins and destinations during transport on site. The project team also used drones equipped with GPS to take regular surveys of the site to provide three-dimensional data monitoring and progress updates.

This use of digital tools and leveraging technology in new ways represents a significant innovation in the field. It has greatly expedited the rate of the excavation processes, and it has enhanced collaboration and seamlessness between in-office work and planning, and site work. It has also enabled the team to train operators to do the work more efficiently than ever before. This training and smooth collaboration became crucially important on a busy site, when during peak years, there were more than 1,000 staff on-site, working in more than 10 or 15 disciplines simultaneously.

The Turcot project was one of the first in Canada where a soil remediation team made innovative use of these digital technologies to create new efficiencies in the field. Traditionally, soil tracking and surveillance involves a high degree of manual measurement and documentation, that can be both time-consuming and challenging in a project site full of dense activity. With these technological innovations, site workers can use network-connected smart tablets to access necessary data anywhere on the work site. The tablets also allow the site team to share real-time updates and information with office staff who are not on-site.

Streamlining the soil tracking system not only cut down on manual work and time investment, but it also cut down on transportation costs and construction materials. Per environmental regulations, some of the lightly contaminated soil was eligible to be reused on-site as construction backfill material. By tracking this soil by GPS, the project team made it much simpler to reuse the soil that was considered safe, and reduced the congestion, costs and GHG emissions associated with shipping in commercial materials from sources like quarries and sand pits.

The Turcot project was a pivotal one in the field of soil remediation, because the project environment enabled the team to apply these innovative methods seamlessly and to great advantage. The entire team demonstrated adaptability, innovation, and efficiency that supported complex project delivery on an ambitious timeline, and with an enhanced landscape of ecological protection and digital transformation.

Nicolas Sbarrato is a project director and EQA expert with WSP Canada.

Featured image: The length and high-profile nature of the unprecedented Turcot Interchange project, involving 300,000 daily users, meant the project rehabilitation work would be a team effort of incredible magnitude.