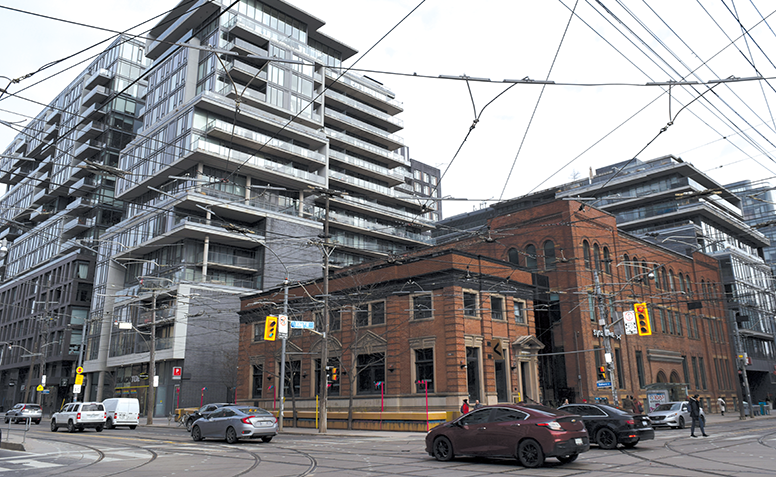 In September 2019, the Infrastructure Ontario President and CEO noted the need to focus on best practices for transit-oriented development (TOD) when building the new transit routes announced in the project pipeline.

Development around new transit stations is inevitable for obvious reasons, but directing development, ensuring development that complements the area and provides valuable resources for residents moving there, is another thing entirely. And directing that development when new stations are positioned in locations surrounded by greenfield properties is not remotely as difficult as doing so in existing urban cores.

With that in mind, we engaged Peter Paravalos, WSP’s director of transit-oriented development for rail/transit infrastructure in Canada, to take a closer look at two key intersections slated for new transit hubs, in order to appreciate the challenge ahead in implementing best practices for TOD. We focused on the proposed Ontario Line, the estimated $10.1-billion subway project that will connect several transit routes throughout Toronto. The two intersections we looked at were Queen and Spadina, and King and Bathurst.

Before heading out, the two of us had a brief conversation to provide some context for the initial assessment of the area. He explained the three kinds of value indicators for consideration for transit-oriented development from a developer standpoint: node value,  place value, and market value. Node value speaks to the transit that already exists, and whether or not the new transit system to be put in place has connectivity to any other form of transit. The place value speaks to where the location is relative to other important locations in the city. In the case of Queen/Spadina and King/Bathurst, the proximity to the downtown core creates significant place value. In terms of market value, it focuses on what can be put in that place; what types of development are permitted/needed in that location.

In the case of both intersections we focused on, as well as the Pape/Danforth location where the Ontario Line will connect to Line 2 of the subway system, all three ‘values’ are high for all three of the intersections.

Paravalos and I stood on the southwest corner of Queen and Spadina and took a 360-degree view. Currently, the intersection features crossing streetcar lines (Spadina north/south, and Queen west/east), with two-to-three story buildings on each of the four corners. Currently, bank branches occupy the northeast and southwest corners, while fast food restaurants occupy the opposite corners.

One of the most important considerations in existing urban cores is heritage. When heritage buildings are in the immediate development area (generally considered a two-to-three block radius) that can have a significant impact on development, as the heritage considerations will limit the type of infrastructure can exist at that location. And in the case of the Queen and Spadina intersection, there are immediate heritage concerns to be addressed in regards to the buildings located on the northeast and southeast corners.

“Looking towards the east, two heritage buildings that we have here, they’re both historic structures,” Paravalos said. “They’re both around 1890, early 1900 buildings. They definitely have the potential to be worked into something.”

But the historic elements for consideration don’t end there.

“Also, the further east you go, you have more of this Queen Street historic feel, and putting anything that is going to be large in that area, you are going to get a lot of (resistance).”

As a result, the easiest buildings to redevelop, quickly, would be the northwest and southwest corners, as the current structures do not have historic value (Paravlos estimated the buildings had likely gone up in the 1970s) and thus could be replaced by buildings with higher densities.

In order to “do TOD right”, certain secondary considerations need to be taken into account. For Paravalos, one in particular stood out immediately.

“The primary thing is the priority of pedestrian, bicycle, and micro-mobility […];  priority for those folks,” he said. “The intersection would definitely need to be re-worked, especially with the influx of folks walking in this area.”

There is also the question of where the station access points will be, and how exactly that access will be integrated into the existing infrastructure, as well as a reconfigured intersection. There is also a need to take into account where the emergency egress locations will be and how they will factor into an area that is densely packed with commercial properties at present.

Following the analysis of the immediate intersection, we took a look at the immediate area and the current amenities that already exist. Since it is likely that multiple corners of the existing intersection will be redeveloped with residential towers, it is important to understand which amenities already exist in the neighbourhood. Any that are missing, or that are considered to be too far away based on the volume of people entering the area, should be integrated into the new development.

There is plenty of retail along Queen Street, both west and east, and a grocery store is located three-to-blocks west down Queen. North of the intersection is the entrance to Toronto’s Chinatown, with lots of smaller fresh food markets. South of the intersection there are several coffee shops and fast food outlets, as well as a handful of professional services (dry cleaners, hair salons, dental offices etc.). There are elementary schools in the area, although neither of us was aware of their current capacity, so there could be an opportunity to build residential units to support young families.

One key amenity that we didn’t see was a health clinic. If in fact there is not one in the immediate vicinity, one would be needed in order to support the additional residents added to the region. Also, green space is lacking in that immediate area already, so some sort of green space element will be needed as part of the new development.

Overall, the intersection is able to support multiple residential towers, and the transit station would be best to be integrated into the framework of one or multiple of these buildings. At least one of the financial institutions should be re-introduced into one of the buildings, with a health clinic and perhaps a grocery store included in the development.

Moving west down the Ontario Line from Queen and Spadina, the next stop is slated for the intersection of King and Bathurst.

Paravalos and I took the 10-15 minute walk from one intersection to the next, noting existing amenities along the way to understand how they could impact the needs at King and Bathurst.

“It’s not as complex, but certainly it is as confined (as Queen and Spadina),” Paravalos said. “You don’t have much room for constructing something and keeping everything going at the same time.”

The two intersections are different based on the density already in place within the immediate block in every direction. Unlike Queen and Spadina, whose density is low-rise commercial, there are already residential towers in place at King and Bathurst.

However, there are similar heritage constraints that must be factored in. At the intersection, three of the four buildings on the corners are buildings with significant heritage considerations. But there is already development ongoing for more residential towers just off the immediate corners, both to the south on the west side of Bathurst, and east on the south side of King.

With the number of residential units already in place, and the work being done to develop more, the conversation quickly shift to amenities in the area. The immediate area has several green spaces with four park areas, including the Fort York National Historic Site, within four blocks of the intersection. There is a public elementary school within three blocks of the intersection as well, so young families could be attracted to the new developments at and around the intersection. Groceries can be found at a Loblaws that is located approximately four blocks away, but with the size of the residential influx happening in and around the intersection, another grocery option could be considered in one of the new developments.

With several thousands people likely to be added to the intersection in the next five-to-ten years, the needs could surround some basic professional services, such as walk-in health services, dentists, optometrists, and the like.

One of the discussions that came up, as it does in most conversations regarding housing in Toronto, is equitable and affordable housing. With the number of properties in the area that have development potential, certainly affordable housing units should be a consideration at or near the intersection.

“With development in an area as expensive as this, you’re always having these issues with affordable housing and how you are going to pay for it,” Paravalos said.

In order to make affordable housing an option in this situation, a government entity would have to step in to provide some funding. Otherwise it would not be likely that a developer could put together a business case that would allow for affordable housing units to be constructed and station or amenity interests integrated without losing money on the project.

With many moving parts to consider, building transit-oriented development that meets the needs of the residents in the immediate area, and well as the city as a whole, is no easy task. But with careful consideration and understanding of individual and community needs, developments can be built that will leave a lasting, long-term positive impact on the city.

Featured image: A corner of King and Bathurst, showing the current development in place and illustrating the opportunities for transit-oriented development as part of the development of the Ontario Line.