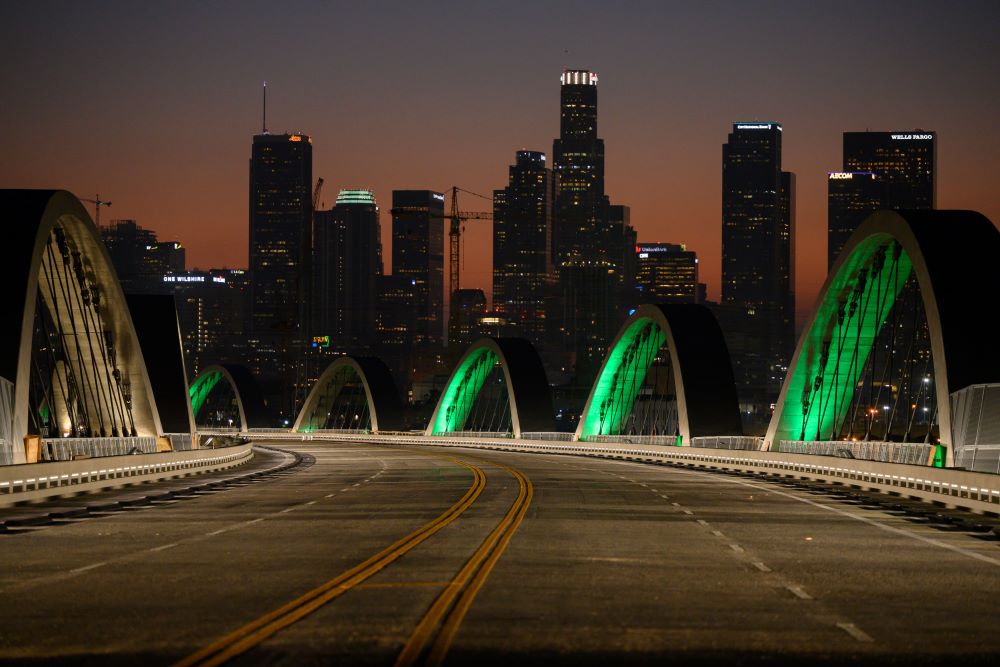 Spanning the Los Angeles River, the original bridge was constructed in 1932, but suffered from a fatal flaw. Its concrete included an aggregate that caused a chemical reaction known as alkali silica reaction, which severely damaged the structure over time. In 2016, the bridge was demolished.

At 3,060-ft-long and 100-ft-wide, the redevelopment of the bridge—designed by Michael Maltzan (architect) and HNTB (structural engineer)—includes 10 network arch spans, with a total of 388 hangers supporting the bridge deck.

Appointed as the erection engineer on the project with an extensive complex structure expertise, COWI worked closely with the contractor JV Skanska Stacy and Witbeck (SSW) to develop a constructable erection sequence, which included step-by-step camber and stress analyses, and hanger installation and stressing procedure of the bridge.

“It was a challenging project but the excellent teamwork between designer, city, contractor, and erection engineer made this project a success story,” explained COWI’s senior project manager Tobias Petschke.

COWI undertook a number of considerations to ensure the safety of both the public and the construction crew during this complex bridge erection, including the design of customized lock-up devices to stabilize the seismic pendulum bearings of the bridge during construction.

“Having the opportunity to apply our expertise to projects of this kind reminds you just how important our work is. By exploiting some of the most advanced techniques we can ensure the safe and sound erection of complex infrastructure projects,” added Petschke.

AECOM’s project scope includes delivering a feasibility report in addition to detailed design and tender documents that examine the technical and economic viability of the proposed transmission line. Currently, parts of the region rely on main load centers supplied by small diesel generators. The Uganda-Democratic Republic of Congo Power Interconnection Line aims to connect these regions to the national grid, providing a less expensive, reliable, and secure power supply. AECOM conducted an initial feasibility study for this work in 2013.

“We’re excited to partner with the Nile Basin Initiative, building upon our important previous work to help make the Uganda-Democratic Republic of Congo Power Interconnection Line a reality,” said Joseph Salim, senior vice president with AECOM. “With the rich renewable energy potential in the Nile Basin, this work will help bolster the region’s energy grid economy.”

Project objectives include assessing existing and future power sector development in the region; recommending appropriate rural electrification along the proposed route; reviewing organization and institutional frameworks for the construction, ownership, and operation of the line; exploring possible climate change risks to the project and proposed mitigation measures; and estimating the impact of the interconnection on the countries’ carbon footprints, specifically greenhouse gas emission reduction that will accrue from the transmission line.

The new Chenab Bridge is part of the Udhampur-Srinagar-Baramulla rail link project in the Jammu and Kashmir region in India, in the Western Himalayas, approximately 600 kilometres north of New Delhi. The project represents an important rail link that will join the Kashmir Valley to the Indian Railways network.

The bridge has numerous design challenges, such as the erection of the steel arch by cable crane, the bridge’s huge dimensions, and the special design requirements—redundancy of the arch, the earthquake load, and blast load effect.

Wind engineering also posed a significant challenge for the structure. The main challenge in wind engineering was not the size of the bridge itself but the site and altitude at which it is located. In extremely rough topography, standard models of wind and turbulence are unlikely to be realistic; a special type of wind tunnel testing was therefore conducted to assess the design wind parameters.

Wind engineering of the bridge was conducted by combining in-house wind engineering expertise and the wind tunnel tests of FORCE Technology in Denmark. The first test involved a large-size topography model of the bridge site. It revealed some unusual wind characteristics, including up to 11 degrees vertical inclination of the mean wind velocity and wide scatter of turbulence intensity from seven to 55 per cent, depending on wind direction.

“The Chenab Bridge is a major achievement—for all the bridge designers and builders involved in the project,” said Pekka Pulkkinen, design director, WSP in Finland. “The erection of the arch, a truly memorable moment, represents a great execution of engineering expertise. Cooperation between the design team and contractor has been essential for the project’s advancement. The challenges in the project have been handled together, thereby facilitating the successful solutions.”

The world-class, multi-purpose Optus Stadium was designed with one key vision: fans first. That commitment called for an innovative design that would ensure an exceptional atmosphere for every event—and a home ground advantage.

Key design and fans-first features included future-proofed stadium technology (such as full 4G Wi-Fi coverage) and more than 70 food and beverage outlets. The stadium includes the widest range of seating and hospitality options of any stadium in Australia, and the lightweight fabric roof covers 85 per cent of seats and responds to Perth’s climate conditions. At night, it presents a spectacular glowing halo effect.

With a design that acknowledges Western Australia’s unique sporting, cultural, and Aboriginal heritage as well as a Sports Precinct that provides a spectacular vista across the Swan River to the city, Optus Stadium is a community anchor to be proud of.

“This stadium represents our sporting culture. Beyond Western Australia, it’s a place where all fans can come together to support their local and international legends,” said Brett Davis, Stantec’s regional director for buildings in Australia. “This project called for a fans-first approach throughout all aspects of our design which has subsequently led to exceptional experiences for patrons at every event.”

The project—PCL’s first solar work in Australia—consisted of the design, procurement, and construction of a 153-megawatt solar electricity generating station in Gunnedah, New South Wales. Covering 304 hectares, the large-scale solar photovoltaic system uses 353,528 bifacial Canadian Solar-made panels on a single-axis tracking system. The panels continuously generate energy as they follow the sun’s movement throughout the day.

After certification of substantial completion status, the Gunnedah Solar Farm will produce enough electricity to meet the needs of approximately 48,000 households and reduce greenhouse gas emissions by over 290,000 tonnes of CO2 per year—the equivalent of removing approximately 125,000 cars from the road.

“As true solution providers, we were able to overcome the challenges of inclement weather, the pandemic, and other global uncertainties through resilience and a commitment to achieving our common goals. We extend our sincere thanks and appreciation to everyone involved with this project,” said Gopi Govindraj, country manager for PCL Pacific Rim.