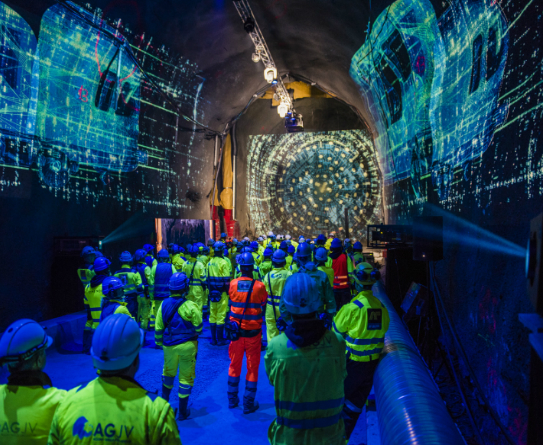 Tunnels have always inspired wonder as feats of engineering that demand the highest standards of technical excellence. In recent years, thanks to advancements in geotechnical research, tunnelling technology and data analysis, projects once thought impossible are not only being built – they are setting records in timelines and safety.

When it comes to modern tunnelling, North America has fallen behind places like Europe and Asia, where investments in railways and highways have led to projects cutting through some of the world’s hardest rock and under waterways connecting mainland communities with their island neighbours.

Now Canada has the chance to lead into the future with projects included in the New Subway Transit Plan for the Greater Toronto and Hamilton Area.

ACCIONA has extensive experience in carrying out technical and complex underground projects, like Norway’s Follo Line which has cut through stone once considered impenetrable, and the Quito Metro in Ecuador, which set tunnelling speed records.

Recent advancements are rooted in investments in research and innovation. One example is our work in geotechnics for constructing large tunnels and underground works. The company has designed a new laser-guided system to construct tunnels without using heavy machinery. This improves the precision of the excavation work by more than 60 per cent, leading to important cost and safety gains. The new system also generates energy savings of nearly 30 MWh in energy consumption.

Leading companies have also pushed forward bringing modern tunneling equipment into service. Some of the Tunnel Boring Machines (TBMs) employed in our projects span 15 metres in diameter, placing them among the largest TBMs in the world.

But size is not the only advantage of our TBMs. Our machines are outfitted with data collections devices that relay critical data points to our TBM Control Centre. This pioneering platform for monitoring and analysing data remotely, allows data analysis that has led to the creation of a predictive maintenance model.

With this tool, we are able to keep machines in service, replacing parts before they wear out, meaning that they spend more time excavating and less time out of service. With each project, we process more than four million data points per machine per day in real time, from its rotation force or speed and the rate of progress through to the fuel, lubricant, and energy consumption

Two recent projects that faced significant challenges that were overcome using these technologies are the The Follo Line and the Quito Metro.

The Follo Line consists of a high-speed railway line that will connect the Norwegian city of Oslo with the town of Ski. The works include two twin tunnels each 19.5 km long that, once completed, will be the longest in Scandinavia. This project has had to overcome a series of difficult challenges. The first relates to the region’s geology, which combines sections of extremely hard rock with other areas of much weaker soil, which complicates the progress through the subsoil. A pioneering method in Norway was used to excavate the tunnels based on four double-shield TBMs, each 150 metres long, weighing 2,400 tons and fitted with 10m diameter rotor blades, simultaneously drilling from a single starting point. As the cutting discs on the head of the front section of each TBM penetrated the rock, the excavated material was extracted on an underground conveyor belt—rather than in trucks—preventing large quantities of CO2 entering the atmosphere. At the same time, the rear section of the TBM installed the segmented concrete lining rings. These segments were manufactured using part of the nine million tonnes of excavated rock, further contributing to the sustainability of the project.

One of the key features of Line 1 of the Quito Metro project was the significant number of technical challenges associated with the work, as the Ecuadorian capital which sits high up in the Andes at an altitude of 2,850m, is located in a seismic region with a complex structure characterised by diverse types of ravines, infills and soils, and  major aquifers. The capital also sits above precious archaeological remains as Quito, the first city in the world to be declared a World Heritage Site by UNESCO, was built on the foundations of an ancient Inca city. All these circumstances had to be taken into account when planning the project, which combined traditional excavation methods in certain zones with the use of three TBMs for the majority of the route. Each of these machines was capable of constructing 18 metres of tunnel in a single day.

With partners that employ the latest in geotechnical research, data analysis, material recycling, and modern equipment, Canada can enter with confidence the age of modern tunnelling and achieve the infrastructure benefits these projects deliver.