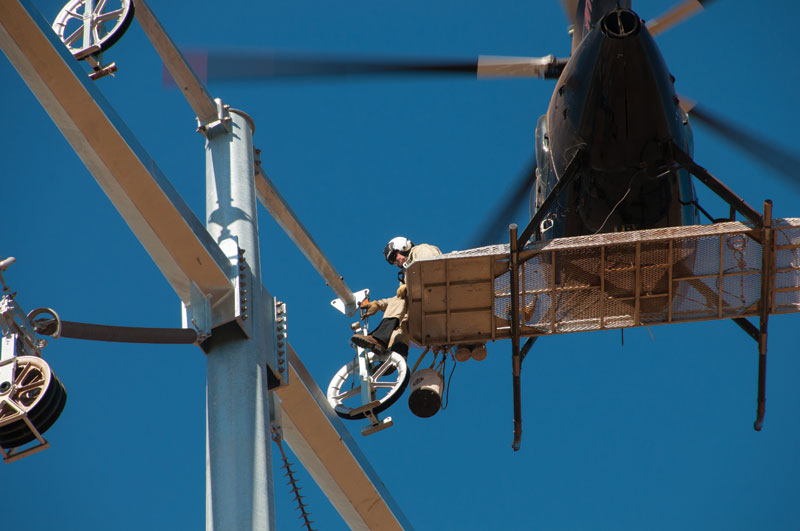 When it comes to energy infrastructure, Canada is on the move.

Of course, that may seem like nothing new, given Canada’s lengthy energy history, particularly in the oil and gas industries. In this latest chapter, however, electricity is playing a major role. A confluence of factors have helped spur the need for more generation, which in turn is driving still another form of energy infrastructure: transmission.

The result: transmission is on a strong growth trend, and that’s good for job creation, Canada’s economy, and electricity consumers, who gain affordable power and a more modern, reliable grid. And the numbers back it up. Between 2010 and 2030, the total transmission capital investment requirement in Canada is estimated at $35.8 billion. The Conference Board of Canada estimates that more than $350 billion in total electricity investment is required over the next 20 years.

From British Columbia to the Maritimes, projects are underway, and as is often the case with a dynamic market space, the key drivers are both diverse and interrelated.

British Columbia
British Columbia’s growing population means that electricity demand will increase by 40 per cent in the next 20 years, according to BC Hydro. In response, the utility is building the Site C Clean Energy Project, located on the Peace River in the northeastern part of the province. Site C, which can serve both demand from liquefied natural gas facilities as well as population centres to the south, received approval from the province in December 2014. The facility will add 1,100 megawatts (MW) of capacity to the province’s grid.

Next comes the need for transmission infrastructure that must be built to push power toward demand. One example: a proposed transmission project consisting of a modern, high-voltage 500-kilovolt (kV) line going from the Site C dam southwest toward the older Peace Canyon dam.

Site C construction is slated to start this summer.

Alberta
Moving one province east to Alberta, the oil sands industry is a big driver behind new electricity infrastructure in the Fort McMurray area.

The Alberta Electric System Operator (AESO) has estimated that electricity demand in northeastern Alberta will more than double over the next 10 years. In December 2014, AESO awarded a contract to design, build, own, and operate the Fort McMurray West 500-kV Transmission Project. Behind the project is Alberta PowerLine, a partnership between ATCO and Quanta Services.

The $1.43-billion project consists of approximately 500 kilometres of 500-kV transmission line from Wabamun (west of Edmonton) to Fort McMurray. In addition to helping to meet growing demand, the project increases capacity of the overall AESO system, bolstering reliability.

The project is also notable because it’s the first to be awarded under AESO’s recently instituted competitive process for new transmission. If approved, construction is scheduled to start in 2017.

Manitoba
Continuing east to Manitoba, still other drivers are at play. In summer 2014, work began on the 695-MW Keeyask Generating Station. The hydro project, located in northern Manitoba 725 kilometres northeast of Winnipeg on the lower Nelson River, will provide power for both Manitoba and export markets (such as the United States). Yet Manitoba Hydro states that 75 per cent of its current generation output is delivered to southern Manitoba via a single corridor shared by the existing Bipole I and II transmission lines. As a result of heavy reliance on one transmission corridor and a single converter station in the south (Dorsey Station), the system is vulnerable to extensive power outages.

Enter the Bipole III Transmission Reliability Project. The project, which has a control budget of $4.6 billion as of last fall, will improve system reliability, reducing dependency on Dorsey Station and the existing corridor.

Mortenson Construction is participating in this major infrastructure project. Through a consortium with Siemens Canada, Mortenson will be responsible for the engineering and construction of the converter stations. The 2,300-MW transmission project is expected to be commissioned in 2018.

Thus, encapsulated in the Bipole III project are at least three infrastructure drivers and trends. First, it enables the delivery of energy from Canada’s resource-rich yet less populous north toward load centers to the south. Second, it enables Canada to export more of the affordable electricity it produces, adding to the nation’s economic strength. And third, it gives Canadians greater access to affordable electricity with enhanced reliability.

Exporting electrons
The interconnection of Canada and the United States’ systems is nothing new, but it’s increasing. With the exception of Nova Scotia, Prince Edward Island, and Newfoundland, all Canadian provinces are connected to neighbouring states via more than 30 major transmission interties.

In 2013, Canada exported 57.9 terawatt-hours of electricity to the United States, generating trade revenues of $2.44 billion. Continuing to strengthen the connections between the grids can be a boon for Canada, starting with jobs and other economic benefits associated with the build-out of infrastructure and continuing with the export of more electrons than ever before.

Connecting large regions also strengthens reliability and enables more effective use of such variable renewable resources as wind energy because system operators have a greater number of resources across larger areas to tap at any given time. (Put simply, the wind may not blow all the time, but it is always blowing somewhere.) Moreover, a greater number of generation sources fosters more competitive electricity markets and, therefore, more affordable electricity.

Interconnection trends continue further east. Last year in Ontario, transmission company ITC acquired the rights to develop the Lake Erie Connector. This high-voltage submarine direct-current project will link the Ontario electricity market and the PJM LLC system, which covers a large chunk of the eastern United States. The project will allow for the bi-directional flow of power and associated benefits (such as reliability and affordable power for both nations).

Still other projects are in the works. To name another (and continue eastward), the $1.4-billion, 1,200-MW Northern Pass transmission project will export clean, low-cost energy from Hydro-Québec’s hydroelectric plants to New Hampshire and the ISO New England Inc. system.

In Ontario, the massive Niagara tunnel project has tapped more of Niagara Falls’ energy, helping Ontario move away from coal generation. A major new underground tunnel placed into service in 2013 delivers water to the Sir Adam Beck generating complex, which, along with other system upgrades, helps increase the facility’s capacity by 150 MW.

Nova Scotia, meanwhile, has a target of 40-per-cent renewable energy by 2020. The Maritime Link is a transmission project that will allow Nova Scotia to import hydroelectric power from the Muskrat Falls generating station, a project in Labrador being developed by Nalcor Energy as part of the Lower Churchill Project. And—indicative of how transmission expansion typically has multiple benefits—the Maritime Link will connect the island of Newfoundland to the North American grid for the first time in history. The project will help Labrador and Newfoundland move off of its dependence on oil.

As is the case in the United States and other countries, much of Canada’s electric grid is aging. Modern transmission means more efficient lines that carry more energy with greater reliability and less electricity loss.

Moreover, transmission development does not stop with just the major lines. Such projects typically mean additional offshoot projects that need to be built. The end result is more economic activity, more jobs, and a stronger, more modern and reliable grid.

Brian Abeld is the director of business development for Mortenson’s high-voltage transmission group.