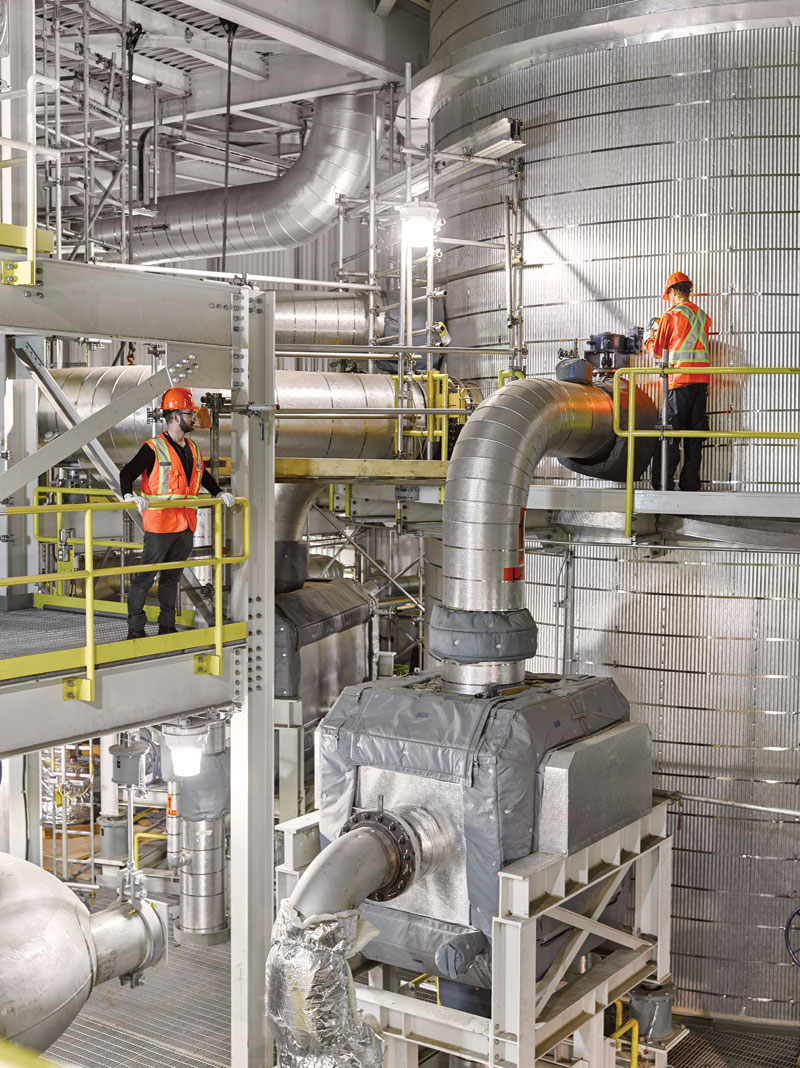 Built by SaskPower, Saskatchewan’s public electricity utility, the Boundary Dam Integrated Carbon Capture and Storage (CCS) project is expected to capture one million tonnes of carbon dioxide (CO2) a year—the equivalent of taking some 200,000 cars off the road—and store it deep underground. Meanwhile in Alberta, Shell’s $1.35-billion Quest CCS project (No. 38 this year), to begin operating in late 2015, is also expected to reduce CO2 emissions by one million tonnes a year.

While some people see carbon capture and storage as perpetuating our reliance on fossil fuels, others view it as the only way to realistically achieve CO2 emission targets. Whichever the case, Canada is leading the way in implementing this new technology on a large, commercial scale.

Carbon capture and storage is a process where CO2 emissions are captured from large industrial plants, such as coal-fired electricity plants, cement plants, oil sands upgraders, or oil refineries. The goal is to prevent carbon dioxide, a greenhouse gas that contributes to climate change, from entering the atmosphere. The captured gas is compressed into a fluid and transported either by pipeline or tanker truck to injection wells.

There, the CO2 is injected into carefully selected geological formations several kilometres underground, for permanent storage. In the two projects outlined below, it will be injected into porous rock formations, i.e., rock with tiny pores containing salty water. Several layers of impermeable cap rock above the formation will ensure the CO2 remains sealed in and trapped. Both projects emphasize that rigorous monitoring systems will be put in place to detect any leaks or environmental impacts.

Public investment
Alberta’s 2008 Climate Change Strategy identified CCS as a key technology for reaching its CO2 emission reduction targets. To this end, in 2011, the Alberta government announced a contribution of $745 million over 15 years for the Quest CCS project, and $495 million over 15 years for the $1.2-billion Alberta Carbon Trunk Line (No. 44 this year)—a 240 km pipeline that will carry CO2 captured from a fertilizer plant and a bitumen refinery to oil fields in south-central Alberta for use in enhanced oil recovery.

Derek Cummings, press secretary for Alberta’s minister of energy, said these projects are important for addressing climate change concerns. “The International Energy Agency has talked about all forms of energy growing, and points to CCS specifically as an area where large-scale greenhouse gas reductions can be achieved. For Alberta, it’s an important tool in our toolbox.” He notes that with its geology and energy development, Alberta is ideally suited for CCS. “We hope to see these two projects demonstrate the technology and help to drive the costs down.”

The federal government is also investing in CCS: it has committed $120 million to the Quest project and $63 million to the Alberta Carbon Trunk Line.

Shell Quest
At Shell’s Scotford Upgrader near Edmonton, heavy oil (bitumen) from the Athabasca Oil Sands is upgraded into synthetic crude, and later refined into products such as a gasoline. The Quest project, constructed on behalf of Athabasca Oil Sands project joint venture owners Shell, Chevron, and Marathon Oil, aims to capture one million tonnes of CO2 per year, or about 35 per cent of the upgrader’s emissions.

Why only 35 per cent? “We went after the biggest source of CO2,” said Adrienne Lamb, communications advisor for Shell. She explained that in the upgrading process, hydrogen is added to break up the large hydrocarbon molecules into smaller ones. Creating this hydrogen is what produces the highest concentrations of CO2. “We’ll be capturing roughly 80 per cent of the CO2 resulting from that process. We had to look at what made the most commercial sense.”

Once captured, the CO2 will be compressed into a dense fluid and carried through an 80-kilometre pipeline to injection wells north of the upgrader. There, the CO2 will be injected into a rock formation about two kilometres underground, to become trapped in the tiny spaces in the porous rock.

“It’s kind of the reverse of drilling wells to extract oil and gas, which have been trapped underground for millions of years,” Lamb said. For this project, they’ll be about one kilometre deeper than oil and gas resources in the area. “An important part of storage is picking the right location. The key is what’s above it: many, many metres of cap rock, creating an impermeable barrier.”

The injection wells have already been drilled, as well as groundwater wells for the monitoring program. The pipeline is complete, and right-of-way, restoration, and reclamation activities are underway. Construction of the capture facilities is also on track, with start-up planned for spring 2015 and full-capacity operation by the
end of the year.

Boundary Dam
About 47 per cent of Saskatchewan’s electricity comes from coal, and Boundary Dam is its largest generating plant. With federal regulations calling for coal-fired plants over 50 years old to meet new emission standards by July 1, 2015, SaskPower decided to refurbish an aging unit to equip it with post-combustion capture technology.

The $1.4-billion project came online in October 2014. “The carbon capture process is working even better than expected,” said Mike Marsh, acting president and CEO of SaskPower. “We are now fine-tuning everything to increase efficiency.”

The refurbished unit will produce 110 MW of baseload electricity, enough to power about 100,000 homes. The new technology will capture 90 per cent of the plant’s carbon dioxide emissions—about one million tonnes of CO2 a year. It will also capture sulphur dioxide (SO2), to be converted into sulphuric acid and sold for industrial use.

Specifically, flue gas from the power plant is sent to absorber and stripper towers, where an amine process is used to isolate the CO2 (and SO2). The carbon dioxide is then compressed into a liquid-like state for transportation, while the amine is filtered and recycled.

Some of the CO2 will be purchased by Cenovus Energy and carried by pipeline to its oil fields for use in enhanced oil recovery. This process involves injecting CO2 into aging oil fields or hard-to-reach places. The increased pressure causes the oil to flow more freely, allowing for the extraction of oil that might otherwise have been left in the ground. The injected CO2 remains trapped deep underground in the depleted reservoir.

The rest of the CO2 will be sent to Aquistore, an independent research and monitoring project housed at SaskPower’s Carbon Storage and Research Centre. There, the CO2 will be injected into a saline rock formation 3.4 kilometres underground. “This process is monitored with state-of-the-art tools checking pressure, seismic activity, temperature, and generally collecting data on the storage site and process,” Marsh said.

SaskPower already has experience in carbon storage through the Weyburn-Midale CO2 Monitoring and Storage Project. From 2000 to 2012, this project saw some 22 million tonnes of CO2 injected and stored in two depleted oil reservoirs in southeastern Saskatchewan. Rocks, soil, and water wells were analyzed extensively and no effect was found.

Sharing knowledge
Both projects aim to demonstrate the economic, technical, and environmental feasibility of CCS technology. SaskPower has created the CCS Global Consortium, bringing together business, government, and research groups, to provide a forum for learning about CCS and advancing solutions and applications. At Shell, Adrienne Lamb talked about sharing the knowledge gained to accelerate the deployment of CCS technology globally.

“The three aspects of the technology itself—capture, pipelining, injection—have been used for many years, but now it’s about demonstrating that we can use them on a large-scale basis to reduce CO2. Hopefully, over time, we will learn things that will bring the costs down,” she said.