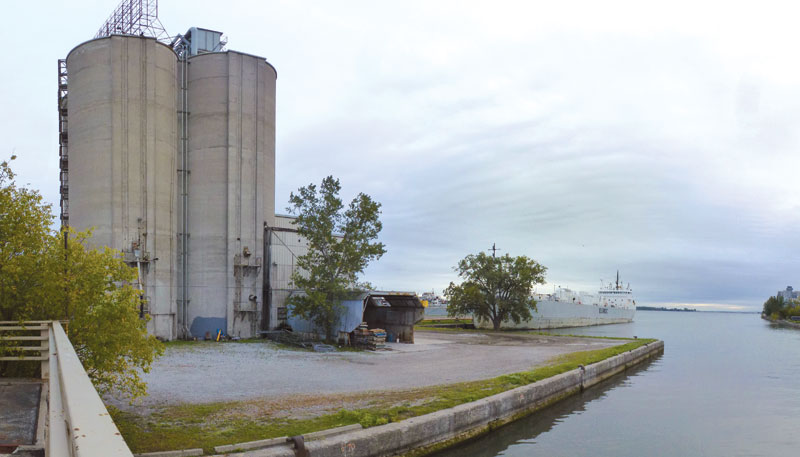 Many Torontonians are often surprised to learn that the Toronto Port Lands remain a functioning port area and will continue to house industrial tenants. Situated on the northwest shore of Lake Ontario, the Port Lands are an extensive industrial area of 988 acres (400 hectares) of reclaimed land located south of Lake Shore Boulevard and the Keating Channel/Don River. Its largest landowner is the Toronto Port Lands Company (TPLC), Toronto’s urban development corporation.

This area—rich in development opportunity—is bounded by the Toronto Inner Harbour to the west, Ashbridges Bay to the east, and Lake Ontario to the south. Since 1917, these lands, reclaimed from Lake Ontario, were used for a number of heavy industrial activities, such as bulk aggregate, storage, oil refining and blending, lumber, and other manufacturing uses. The Port Lands are designated as a Regeneration Area and are part of Toronto’s long-term vision for the area to become a broad mix of commercial, residential, light industrial, parks, and institutional uses.

The majority of Port Lands are considered brownfields, which TPLC recognizes as a parcel of underutilized land that is, or could be, contaminated by industrial activities. TPLC has partnered with the Ministry of Environment (MOE) and the City of Toronto to address the contaminated properties and make them safe for future use. Although TPLC is the environmental steward in the Port Lands, all brownfield redevelopment is regulated by the MOE. Consequently, environmental stewardship is a key priority for TPLC as it continues to redevelop the area through its numerous reclamation activities. In fact, the corporation has restored more than 130 acres of brownfield lands back to productive use since 2009. One key example is East Port’s industrial area, aptly dubbed the “Concrete Campus.”

Concrete campus
In 2004, Toronto city council approved a rezoning application at Commissioners Street and Unwin Avenue that would permit concrete companies like Essroc, Lafarge, Metrix, and St. Mary’s to consolidate their operations. This strategy enables longer-term leases to be established with all similar cement users in one clearly defined area. Relocating heavy industry opens up prime property of contaminated sites, allowing TPLC to clean up and develop these lands. These projects help to stimulate economic development opportunities and increased employment in the Port Lands for the construction industry, which in turn provides economic benefits to the City of Toronto.

In its continuing effort to relocate and move businesses as a means of retaining jobs and creating economic efficiencies, TPLC has recently completed a significant move of long-time tenant Essroc’s main cement terminal to the Eastern Port Lands. “TPLC continues to generate much needed jobs in the City Toronto and the Essroc relocation is a prime example of how our City corporations generate economic growth,” noted Denzil Minnan-Wong, deputy mayor of the City of Toronto.

Construction on this project started in 2013, and for more than three years, TPLC worked closely with Essroc to assist with the relocation of its terminal from its original site at Cherry Street to its new location just north of the ship channel in the Eastern Port Lands at 575 Commissioners Street. TPLC also worked closely with the Toronto Port Authority and Waterfront Toronto to complete this significant multi-million dollar project. This collaboration helped to put into operation one of Essroc’s terminals in the fall of 2014.

“Essroc’s continued commitment to the City of Toronto and the GTA is now fully realized with the opening of our new cement terminal,” said Brian Costenbader, VP of logistics at Essroc. “The Toronto Port Lands Company is a key partner in helping grow our business.”

The decision to keep Essroc Canada in the port area, where it is close to high-rise projects using concrete for construction, achieves a number of city initiatives, such as minimizing commercial truck traffic on roads, which reduces traffic congestion and road wear and tear. The result is better overall service for the Greater Toronto Area’s construction industry. Environmentally, a key benefit is the reduction of greenhouse gases as truck traffic is decreased for more efficient use.

The Essroc move is just one of many projects led by TPLC in the urban-development strategy intended to generate economic growth through a mix of industry, commercial, and residential expansions along the Toronto Port Lands.

TPLC Quick Facts
Established in 1986, the Toronto Port Lands Company (TPLC) is wholly owned by and works closely with the City of Toronto to accelerate economic growth and job creation in association with a number of public and private sector partners. Through its leasing, development, brownfield reclamation, and land management activities, TPLC finances its own operations while funding other operations and is able to deliver a financial dividend back to the city. In 2012, TPLC provided the City of Toronto with a $40-million special dividend.

Michael Kraljevic is the president and CEO of Toronto Port Lands Company.