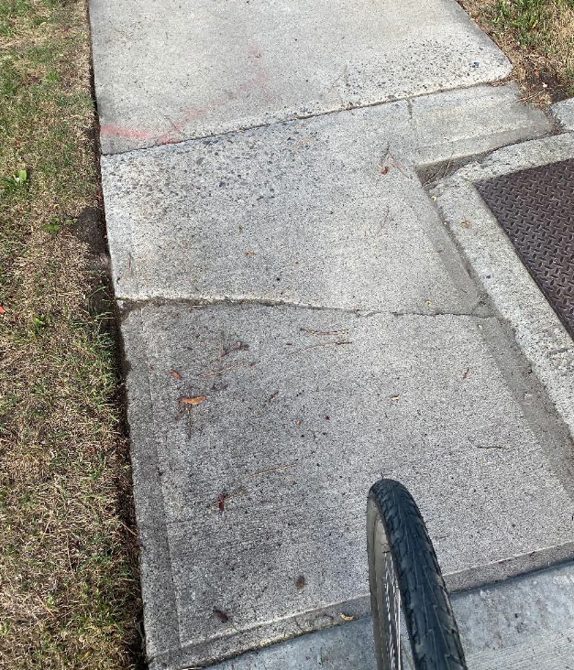 Provincial legislation requires Canadian municipalities to have their sidewalks inspected annually, a necessity that helps protect these municipalities from lawsuits. If someone is hurt tripping on a broken sidewalk, they go to the city for compensation.

Municipalities deal with legal actions from sidewalk slip and fall accidents on a regular basis, and the costs can be substantial. (According to a CBC report, “A Hamilton [Ontario] court has ruled in favour of an 89-year-old woman who slipped and fell on a 23.8-millimetre bump in the sidewalk, a gap that cost city taxpayers $192,000 in damages.”) In 2016 alone, Hamilton paid more than $2 million in compensation for sidewalk accidents.

The process of inspecting sidewalks is complex. It involves a combination of field and office-based components, informing property owners, sometimes managing contractors and many calculations working with different datasets. To record the condition of the sidewalk, its precise location, describe the repairs needed and track the process to make sure repairs are completed, demands multiple paper forms.

Until recently, like many Canadian cities this is how the City of Kelowna, British Columbia inspected their sidewalks.

Municipally trained operators rode specially outfitted bikes over Kelowna’s sidewalks and made a note of any cracks or upheavals. The drivers could only enter one of eight kinds of deficiencies, the type, and the severity, based on the operator’s judgement. The GPS system used to record the location of these inspection observations also varied by about five or six metres, which could suggest that the defect is in someone’s front porch. There was no visualization of the problem. No one else could see what the damage looked like. There was no way to even confirm that the data had been entered into the system. The operators would not know they’d missed something unless they looked for it—often weeks later.

Kelowna’s sidewalks cover 211.85 kilometres and this labour-intensive process took two people between six and eight weeks to complete. The information was then put on a spreadsheet and entered into a software program that included a map. That step took another six weeks. Even planning for needed repairs couldn’t start for two months.

Mistakes were made partly because there were so many steps—increasing the possibility of human error—and as the asset management coordinator of Kelowna Greg Maier cautions, “It’s always dangerous to let people handle the data who don’t understand the total picture.”

While this process was largely effective, it was laborious and awkward. Awkward always means inefficient and like all cities, Kelowna couldn’t afford inefficiencies. Repairs, maintenance, and planned expansion of their infrastructure all come with heavy financial demands. They needed to save every nickel, and to do that they needed a culture change.

As Kelowna was implementing the corporate asset management system called Cityworks in other departments, they wanted to see if they could improve the sidewalk inspection program. Could they change how things were done and automate calculations, eliminate paper, reduce staff time, and become more efficient?

To start that process the senior project manager of the corporate asset management program, Hamid Butt, reviewed the issues and challenges of managing assets before discussing any technology to address them. He doesn’t believe in technology for its own sake. When he saw that an enterprise asset management platform would drastically reduce costs and improve business processes, he presented it to the executives to get their endorsement and they were persuaded.

He initiated a formal change management process, or as Butt prefers to call it “managing change.” He also says that managing change is always about people. He approached operations managers and supervisors to better understand issues, challenges, and opportunities. He found that the practice, and even the understanding of the workflow processes, differed amongst the staff.

Butt and the team developed a structured approach to corporate asset management using new software and technologies to enhance both their business processes and their efficiency. To help departments make this change, Butt asked them to choose five processes that are constants for them. Then he asked them to use the Cityworks software to see how they could be done differently. He wasn’t going to foist change from the top onto front line staff.

“People don’t often resist change” he says, “they resist having to change.” And those who really dig in their heels and refuse to engage with a new system he describes as having “a performance issue, rather than a technology issue.”

Once they got buy-in from the field crews, they started updating their sidewalk inspection process.

Antennae were installed on the bikes for an external GPS system, increasing its accuracy. The range reduced from 20-30 centimetres to 5-6 millimetres. They could categorize the sidewalk as asphalt, concrete, or interlocking brick. They could define defects and their severity (heaved, spalled, cracked) and what seems to be the cause (construction, road cut, tree) and even a suggest a repair method (bay replacement, grinding, levelling).

Operators were provided iPhones, so taking a picture of the problem was easy and automatically integrated into the system. They started using the ArcGIS QuickCapture application, which records the date and time on the photo. Instead of filling out multiple paper forms to record inspection details, using this Esri-based app, a defect is automatically logged with the location, the date and time of the inspection.

They were able to update their system every day, though the system can be updated hourly. At the end of a workday, the data of each sidewalk segment is reviewed. Significant defects are identified and depending on the severity of the upheaval or crack, they decide whether to make patch or full repairs. Because the data is shared, they can find out if there are plans to dig up that stretch of sidewalk soon for repairs on other assets like water or power lines. Or if this is a block with a lot of defects and can’t just be patched but needs a larger permanent repair like full sidewalk bay replacements.

Once a decision is made, a work order is assigned and scheduled. The work order includes accurate information about the defect, the cost of the repairs and when re-inspection is needed. Because everyone involved can have access to the information through reporting, dashboards, and workflow notifications, duplicating information on multiple forms is now unnecessary.

The speed and accuracy of noting the severity of sidewalk defects, their location, condition, and overall risk is crucial for smart asset management. As Maier says, “reactive maintenance, like an unscheduled break repair, is the most expensive fix. Preventative and predictive maintenance is much more cost effective.” As every homeowner knows, start before it gets worse. The sooner you can attend to repairs, the better.

This is a shift in focus. Traditional asset management has been simply inventorying assets on a spreadsheet. Kelowna has moved towards a condition-based asset maintenance approach. They are centralizing their asset inventory and managing their assets by monitoring their condition using mobile data collection technology. They’re using empirical asset data to decide the timing of their asset maintenance and renewals, while minimizing risk, in line with the city’s service level commitment.

This new approach is a big money saver. If a manufacturer says an asset—like a sidewalk—should last 40 years, Maier hopes that by using Cityworks and timely, proper maintenance, they can extend the life of their assets even a few more years. That may seem like small savings, but if they can expand a life span of an asset by only two per cent it equates to millions of dollars over the asset’s lifespan and Kelowna owns approximately $4 billion worth of assets.

The system is being used for other legislatively required safety inspections like road guardrails. Kelowna’s Parks department is now migrating to this asset management system to monitor the state of trails, identify areas prone to flooding and prioritize asset repairs for public safety.

This approach is sparking interest around the country. Maier has spoken to cities much bigger than Kelowna, (Brampton Ontario) and much smaller (Leduc, Alberta) regarding the city’s corporate asset management program. He has also presented the city’s enterprise asset management system at the Canadian National Asset Management (CNAM) conference.

Doing more with less is the clarion call for all Canadian communities and they can’t afford to overlook anything, including sidewalk inspections.

Rob Santos is the director of public works with Esri Canada.

Featured image: Municipalities deal with legal actions from sidewalk slip and fall accidents on a regular basis, and the costs can be substantial. (City of Kelowna)

A Window into the Underground