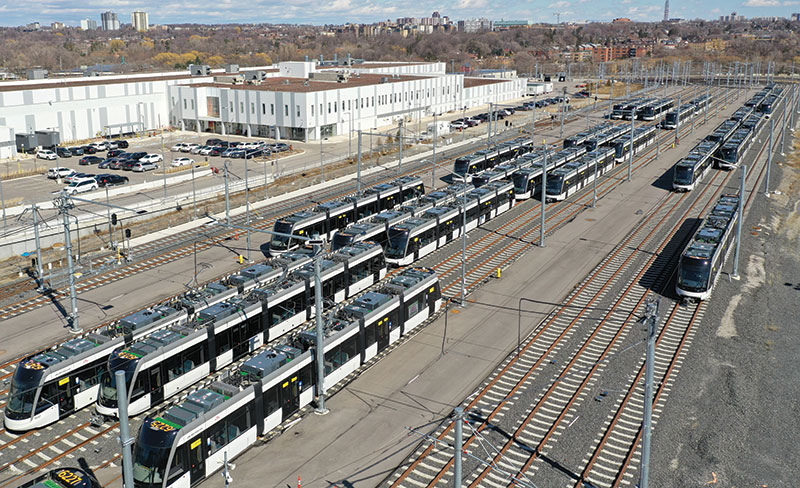 And while many municipalities are pursuing fleet electrification, the transition can be challenging due to the complexities of converting entire transit systems to a new technology, which involves significant upfront costs and related ancillary infrastructure.

During a recent INFRAIntelligence webinar, ReNew Canada brought together a panel of experts to discuss how governments—at all levels—can continue to plan, build, and finance projects that the public wants.

ReNew Canada: Some have called for a permanent federal funding mechanism for public transit. Is that the best path forward?

David Hubner VP, Transportation and Utilities, Infrastructure BC: I think the predictability of funding is key because all the transit, whether it’s interregional, regional, or local within a municipality, it’s very impactful in the respective communities.

And increasingly, projects are becoming more complex. And so, in order to deal with them effectively, everything has to start really early, and it needs to fit together, and all of that work takes time, and it takes money. And I think the federal funding is the catalyst for the provincial and municipal funding working together.

Scott Gillner, senior policy advisor, Brampton Transit: It’s difficult for public transit operators to make any money, so I think capital funding is crucial. In Brampton’s case, we’re covering about 50 per cent of our costs through fare revenues. We also need assistance with operating funding, that again is sustainable, predictable, long-term, and easily accessible.

Funding programs like the Public Transit Infrastructure Fund or the Investing in Canada Infrastructure Program are done through a formula-based model, but there are funds allocated to municipal transit projects that aren’t part of those programs. And those funds are crucial to municipalities, so in those cases, equitable funding across the board either based on ridership or growth or population would be welcomed in terms of the federal provincial funding that we’ve been receiving.

Josipa Petrunic president & CEO, Canadian Urban Transit Research and Innovation Consortium (CUTRIC): The $2.75 billion right now from the federal Zero Emission Transit Fund is a drop in the bucket. Agencies that are doing complicated engineering infrastructure work need to know that when 2026, 2027, 2028 come around there’s still going to be ongoing funding for this electrification decarbonization because that’s what it’s going to take.

The complexity of the technology ahead requires sustainable funding.

Public transit also needs to be part of the Canadian psyche the same way healthcare and education are because what we wouldn’t want to see is a federal government in the future undo the permanent funding that has been announced.

Kaya Sabag manager, Project Planning, Metrolinx: Sustainability is really one of the main pillars that supports all our analyses and how we plan our systems for the future.

So, for example, in our business cases, we consider the changes in vehicle kilometers traveled, how many people we’re planning to get out of and onto buses. But even beyond that if we think about our transit-oriented community focused development, our GO rail stations are now delivered with a focus on transit-oriented development around those station areas.

The big picture perspective on sustainability considers economic development, sustainable communities and helping people to get around more efficiently.

Josipa Petrunic: CUTRIC spend a lot of time helping Infrastructure Canada devise the actual number. We pitched $4 billion, but it tells you about the costs at play.

For example, at the TTC—the biggest transit system in Canada— but still just one agency, it would cost $2 billion alone to electrify their buses. That’s just to buy electric buses. Not the chargers, not the energy storage devices, not the software not facility modification.

It’s a good start, but a drop in the bucket to get to 2030 because really only TTC could absorb all of that and still not be fully electrified.

How can governments and other industry stakeholders work together to ensure the right projects are built on time and on budget?

See also  Stand Up to Sprawl

Kaya Sabag: When we think about planning these big projects in a way that works well, we need to think about integration and how the different systems fit together.

It starts with designing for easy transfers between systems and services. So, if you get off your bus make sure it’s easy to get into the subway station.

While different levels of government all focus on our own projects, collaboration is critical to ensure seamless transit across regions.

David Hubner: One thing to think about is the standardization of technology where you’ve got the federal government putting in money so that jurisdictions aren’t having to reinvent the wheel and that means there is potentially some interoperability and understanding of the full life cycle of the technology.

With projects getting increasingly more complex in terms of the physical construction, it means looking at starting work early as owners to facilitate a contractor coming in and doing a project and focusing on what they need to do. And part of that speaks to the timing and the amount of funding so it can facilitate robust planning, setting the stage, doing some early work and then the actual construction contract and just being realistic about what the risks are and what the timelines can be.

Josipa Petrunic: At CUTRIC we have expertise looking at technology integration projects that are infrastructure, plus operations, and ongoing maintenance.

What we have now that we didn’t have 20 or 10 years ago are powerful data analytics and we can see that there’s a whole new transparent world where municipalities and transit agencies and the clients of the infrastructure providers and the vendors can now track performance and hold companies to account in a way that was not possible before.

So, if you are winning a contract to build a charging system, overhead rafters, facility updates and bus deployments, we can now track every iota of performance of that facility, that bus, that charger.

I believe in the stick over the carrot,  the stick has a certain amount of value to the taxpayer because these projects are complicated. It’s hard to predict all the budget overruns and cost overruns and complexities before you dig a hole and find out what’s underneath the streets of say Toronto.

But on the other side, there’s a lot of tracking those cities and the customers can do now. And is there space now for these multibillion dollar projects to have penalty measures that come into effect years after the infrastructure is built because the performance is not what was promised when the contract was awarded?

Because we’re seeing that it is possible in the bus and charger domain at a micro level, is it possible for a larger aggregate facility, turnkey solution, mega-billion-dollar arrangement? I suspect so.

Scott Gillner: In order to plan these complex projects and execute them you really have to look at the total life cycle of the project, from early days concepts through the funding requests and trying to align the stars between all the various funding and financing opportunities that exist.

It is a hugely complex model, and at the end of the day, a level of good faith needs to be continued between the various levels of government to see these projects come to fruition, because if we waited for all agreements to be signed and all the Ts crossed, and Is dotted, we’d never get anything built.

So that sign of good faith is there. We want to get this thing built as soon as possible for the greater good, and we know all the legal stuff will eventually come together but we’re taking that leap and moving that project forward specifically.

Featured image: The full fleet of 76 light rail transit vehicles to be used on the Eglinton Crosstown line assembled at the Eglinton Maintenance and Storage Facility. (Metrolinx)