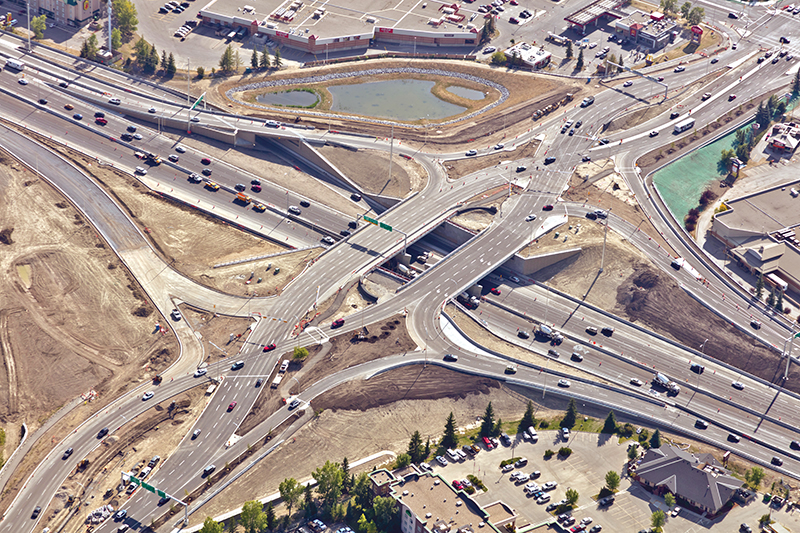 Amidst the daunting choice of complex contracting forms and execution models facing project owners in today’s construction environment, one approach stands out for its simplicity, adaptability and effectiveness: early construction involvement (ECI). The City of Calgary’s $61 million interchange project at Macleod Trail and 162nd Avenue SE illustrates the ECI concept in action and the benefits it can generate.

By adopting an ECI structure and working in good faith towards a common goal, the three key parties—project owner, design consultant and construction contractor—executed a complex and innovative “diverging diamond” interchange— the first of its kind in Canada. It replaced a heavily congested signalized intersection on budget, ahead of schedule and without interrupting traffic on a busy artery. The ECI approach not only identified cost-saving improvements,  it helped overcome the effects of unusually wet weather that could have delayed the project by a full year. ECI thereby demonstrated its utility in addressing risks ranging from fine-grained to project-threatening.

“ECI originated as a tool to accelerate schedule and leverage the expertise provided by the contractor. Time was of the essence on this project,” notes Chris Delanoy, P.Eng., managing director, Calgary for ISL Engineering and Land Services Ltd., the interchange project’s lead consulting firm. ISL has participated in ECI contracts since 2010. “We like this approach, and it was well-suited and very successful in this case,” Delanoy adds. “ECI creates opportunity to start work before the design is fully completed and provides us with valuable input from the people who actually have to build the project. This provides better value, helps get the project going and keeps it on-schedule, and reduces the risk of costly rework.”

ECI is not a separate category of construction contract. Nor is it a comprehensive new execution model. Instead, it modifies existing contracts and execution models to create a collaborative environment. It takes place primarily at the senior project management level, where client, consultant and construction provider come together. It can therefore be applied to several established contracting forms. ECI’s primary characteristic is to contractually bring the construction provider into the process before the design is complete and to provide direct incentive by letting them share the benefits of the value the process creates.

In the case of Macleod Trail and 162nd Avenue SE, that was at about the 60 per cent design stage. Once the contractor is on-board, there is a formal process that enables the three key parties to assess constructability, discuss feasibility and identify problems before the design is fully complete, and also identifies critical-path work that can begin concurrently while the rest of the design is finished. It facilitates jointly solving problems, lowering risks and optimizing design, all before any costly rework and change orders are triggered. This also protects the schedule. Making ECI work requires a project management approach with frequent technical working meetings.

The success of this approach, in turn, hinges on several intangible but essential characteristics within each party. In addition to assessing whether their project calls for ECI, the owner or their representative must carefully evaluate potential engineering/design firms and construction providers for suitability as ECI participants. Establishing the collaborative nature of the working management team is critical, for ECI breaks down without trust and mutual effort towards a common goal. The owner must be willing to share risk and provide financial incentives. The designer must accept and incorporate feedback in order to optimize constructability. The contractor must be genuinely willing to share ideas and information in a spirit of partnership and must have suitable personnel with strong technical construction skills and excellent interpersonal skills needed for effective collaboration.

In Delanoy’s view, Graham demonstrated the required characteristics. “Graham’s team embraced the process and helped generate real savings in excess of the financial incentives that were available, showing that they were genuinely interested in getting to the best result for the owner,” he says.

ECI’s origins go back to the U.K. in the 1990s, where ECI was mainly incubated in the private industrial sector, in which owners are free to select providers based on technical qualifications rather than through competitive bidding (such a process can, of course, carry risks for the owner). Typically, ECI contracts stipulate financial incentives for certain innovations or problem-solving, by directing a portion of the costs saved to the designer or construction provider.

ECI made its appearance in Canada approximately two decades ago. While it is still not particularly common, it is regularly adopted for industrial projects (especially oil and natural gas-related), construction of buildings, as well as on water/wastewater projects, but less so in other infrastructure. While the majority of North America’s larger, more sophisticated construction and engineering companies would say they are comfortable in an ECI setting, there is still only a limited set with a demonstrable track record of successful delivery.

The three requirements that typically signal the need for ECI are overall complexity, a critical schedule and a challenging operating environment. All three coinciding create the classic ECI setting. Increasing project complexity heightens risks of things going wrong and the schedule slipping. If maintaining schedule is critical, then a three-party relationship optimized for proactively solving problems is clearly needed. A challenging operating environment has several effects. First, it increases the chances of problems arising. Second, it complicates maintaining the project’s schedule. Finally, it heightens the risk that a pre-finished design will be ill-suited to the as-built environment.

The Macleod Trail and 162nd Avenue SE interchange illustrates the theoretical framework in practice. It required designing and building around existing infrastructure, including two major roadways, and numerous underground utilities including storm drains, large sanitary sewers, water feeder mains and major telecom lines. The owner required that traffic averaging nearly 100,000 vehicles per day not be interrupted, and that the first of three bridges be up and functioning as a temporary overpass before the first winter, so that north-south traffic on Macleod Trail could become free-flowing. And the physical work all had to take place in two main construction seasons plus one winter—only 19 months in total.

“We examined aspects of constructability and looked for areas where we could save costs or make changes that improved the schedule, or that helped mitigate issues in other areas that arose,” recalls Bryce McKay, P.Eng., Graham’s senior project manager on the interchange. “Coming in after the design process is complete, as we would in a traditional contract, would be too late either to suggest improvements or to implement them.”

Graham offered the city and ISL its extensive experience with ECI. “The construction contractor is actually able to support the design and not merely carry it out as best we can,” adds McKay. “With everyone working collaboratively instead of having an adversarial relationship as in certain types of contracts, ECI helps put the risks in the proper ‘buckets’, supports fast-tracking a job and getting a difficult job done successfully.” All within a relatively straightforward, stipulated-price contract.

Identifying a problem is one thing; resolving it and delivering the physical result is another. The construction provider in an ECI arrangement must have the full range of resources—project management, multiple disciplines, subject matter experts, organizational efficiency, surge labour capacity, access to materials and equipment—needed to use the information the process identifies and solve problems effectively, efficiently and safely and without creating new risks.

The interchange project put ECI and Graham to the test. Several design improvements saved the city nearly $2 million in total. Graham provided design reviews, value engineering, constructability proposals and detailed schedule planning broken into seven phases. Among the resulting improvements were input on construction sequencing that reduced by half the temporary shoring wall required for pile installation, reduced the undercut on MSE walls, and rerouted a detour ramp to avoid rebuilding a major drainage feature. The innovations helped meet the overall objectives including opening Macleod Trail to the free-flowing traffic a full year ahead of construction completion.

More important, however, was how the team dealt with unforeseen events that could have imposed massive new costs.  “It proved to be one of the wettest summers on record,” says McKay. By late summer, the first season’s work had fallen nearly one month behind schedule. The overall threat, however, was considerably greater than that. As McKay explains, “If we hadn’t gotten that first bridge done in the first season, it could have pushed the entire project into a third year—meaning eight to12 months of lost time.”

The team’s recognition that the schedule was at risk prompted design changes to the utility and detour works to avoid certain conflicts and also led Graham to increase significantly its deployed resources. The company’s depth enabled it to smoothly scale up to 24-hour shifts for some tasks and 12-hour shifts for others, making up well over a month in under three months of intense effort. The result: without impairing project quality or safety, Graham actually beat that year’s November deadline, and Macleod Trail became free-flowing in mid October.

The following September, the Macleod Trail and 162nd Avenue SE diverging-diamond interchange was officially completed, seven months ahead of schedule. The City of Calgary was pleased. “The project and the approach taken were very successful, and we’re very happy with the end result,” stated Kara Wolfe, the project manager with Calgary’s Transportation Infrastructure group, shortly after the project was completed. “I see the value in ECI and I would definitely do it again.”

ECI is not suited for every type of construction project. “If a project is too small, ECI can be overkill and might actually slow it down,” says Delanoy. “If a project is megascale, ECI alone might not provide enough information to do everything right.” Very large projects may call for more intensive and continuous process of collaboration and innovation throughout the project’s lifecycle. Delanoy sees a mid-sized range of “Goldilocks” projects where ECI is “just right” for the overall scope and the scale of risks and challenges. In summary, ECI can be best seen as a notably useful and, in selected instances, decisive tool with which an owner can reduce risks, overcome problems and bring a major project to fruition on-time and within budget.