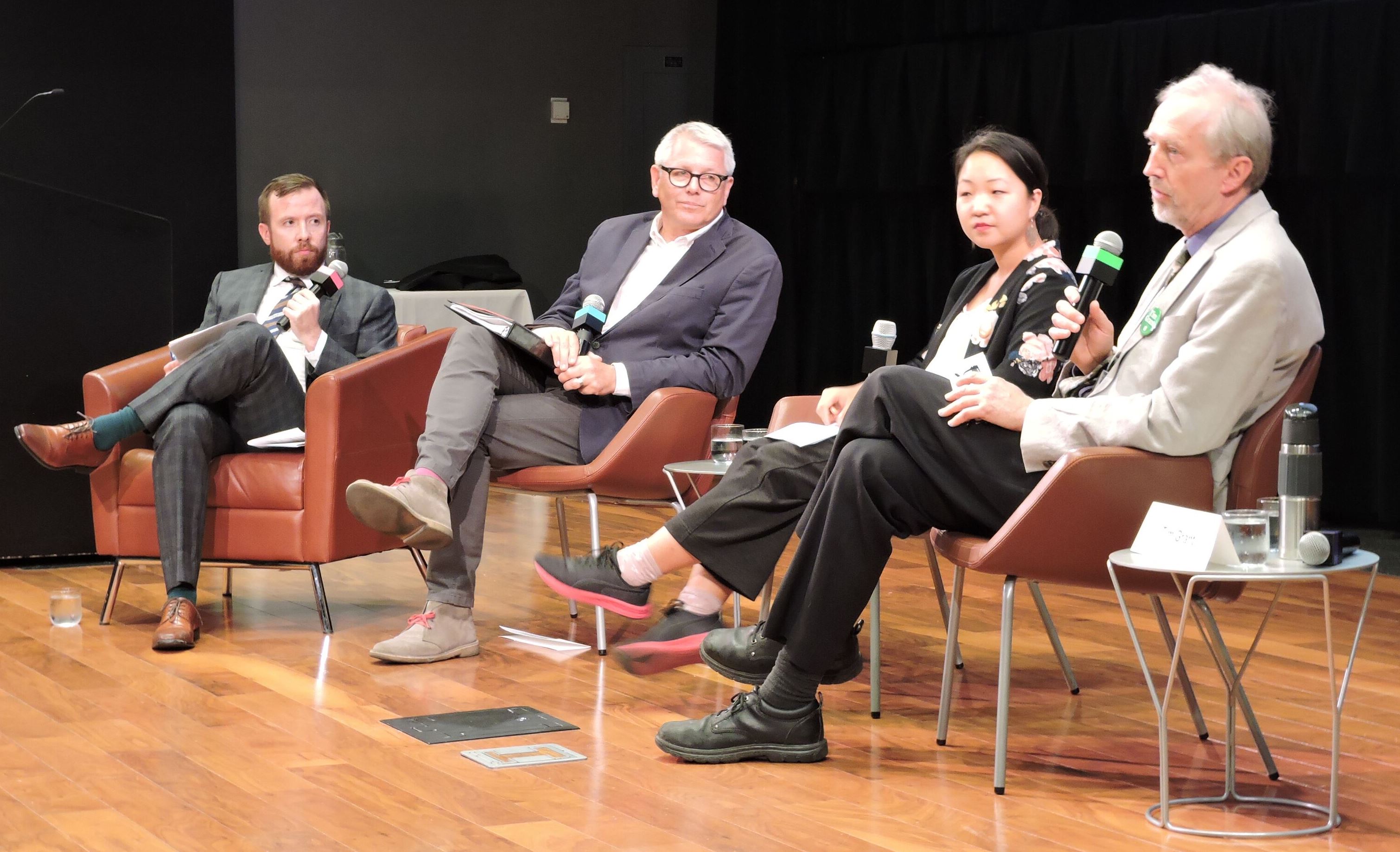 About a month ahead of the Oct. 21 federal election, Transport Futures hosted a special transportation debate at the University of Toronto. Moderated by Ben Spurr of the Toronto Star, the debaters were the Liberals’ Adam Vaughan, the NDP’s Diana Yoon, and the Greens’ Tim Grant. The Conservative Party and People’s Party were invited.

The three candidates discussed road, transit, rail, airport, and marine infrastructure with an emphasis on environmental, funding and governance issues. They generally agreed on the need to meet climate change targets through major investments in municipal transit and active transportation infrastructure. They also supported coordinated and safe intercity travel and goods movement.

While all candidates stated that it is up to the provinces, municipalities, and First Nations to decide on their priorities, Grant called for federal leadership to ensure that municipal and provincial transit funding is contingent on better planning, including an electrified “hub-and-spoke” transit model. Yoon said that the NDP would apply an equity lens to all federally funded transportation projects and work with those municipalities that want to provide free transit. This would be complemented by a national cycling strategy and “made in Canada” electric vehicle policy. Vaughan criticized the Conservative Party for not having progressive transportation policies, referring to their debate no-show.

Turning to Ontario, Vaughan slammed Premier Doug Ford’s subway plan proposal. “The Ontario Line is a joke. It is a two-and-a-half-page document they submitted to the federal government for $11 billion in funding. We will fund real transit projects that are based on real evidence that come from cities.” Grant and Yoon agreed.

Regarding mobility pricing, Vaughan claimed that the Liberals’ $28-billion, 10-year transit investment, combined with the carbon tax (that he viewed as a proxy for road tolls), would decrease car dependence. Yoon said that the NDP would leave this decision to municipalities and provinces but increased funding would mean no need for pricing roads. Grant spoke of the Greens support for tolls but also suggested that a $2 parking levy would raise $2 billion for transit across the GTHA and would encourage the conversion of underutilized lots into housing and commercial developments.

With the Pearson Airport projected to reach capacity by 2035, Vaughan said that the Pickering Airport’s economic, environmental and social impacts is being studied. The NDP and Greens do not support the new airport with Yoon saying that the airline industry must be decarbonized and Grant stating that tripling taxes on short-haul flights, as they do in Germany, is part of the answer.

All parties agreed that more must be done to increase the marine sector’s contribution to goods movement – currently working at 50 per cent of capacity. Vaughan said that quickly rebuilding the crumbling St. Lawrence Seaway requires a public-private partnership which should be funded by the Canada Infrastructure Bank. The Greens and NDP do not support P3s and vowed to change the Bank’s structure, rather than eliminate it.

The Transport Futures debate was sponsored by the Residential and Civil Construction Alliance of Ontario, 407 ETR, and the Ontario Good Roads Association. For more information, visit www.transportfutures.ca/election.