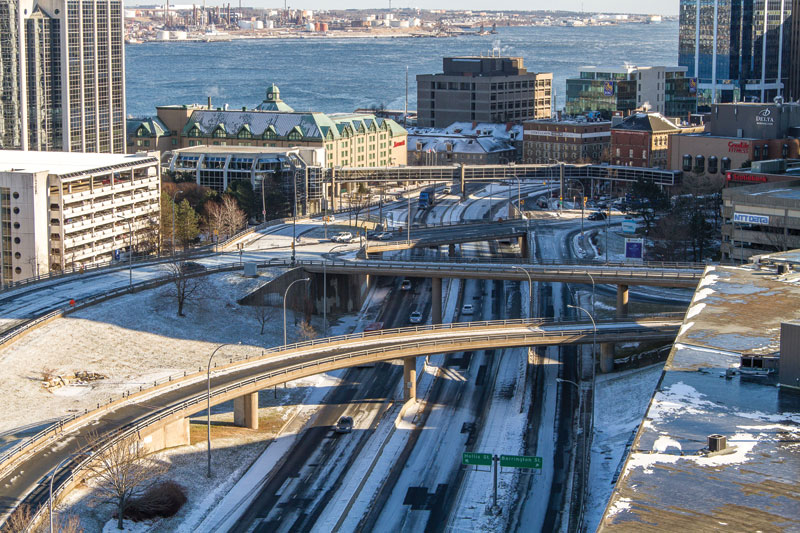 In the 1960s, Halifax was struck with the same idea as Toronto: build a major commuter highway through the lower downtown core to enable cars to transverse the city. In fact, the designers of the Cogswell Street Interchange were the same engineers who designed downtown Toronto’s Gardiner Expressway—and we all know the outcome of that experiment.

The Cogswell interchange currently occupies more than 16 acres of land north of and adjacent to the downtown core. The current series of over and underpasses effectively blocks the city’s north end from the downtown. The interchange design eliminated the old grid pattern of city blocks, reduced the ability to walk from one end of the downtown to the other, and made the auto king of the roadway.

The grand vision
The grand vision for the redevelopment includes the complete removal of a tangled web of roads and ramps, linking at least four streets (including Barrington and Lower Water streets and Rannie Drive) and redeveloping the brownfield site with a grand boulevard lined with walkable green spaces, bike lanes, a major transit hub, extension of the harbour district heating system, commercial redevelopment, and a mixture of apartment and condo buildings. The design completed to date is merely indicative; however, Paul Kent, the outgoing CEO of the Greater Halifax Partnership, said this opportunity was a profound change in a city that has seen far too little growth in the past 20 years.

The entire site, fortunately, falls outside of the restrictive Halifax View planes guidelines, a controversial plan that protects the view of the city’s harbour. In an interview, Halifax mayor Mike Savage called this project “a unique opportunity to correct a piece of infrastructure that is a remnant of the 1960s and 1970s transportation plan that separated north and south Halifax. Imagine what could be there: a reconnection of the city. This project makes a lot of things possible including being the gateway to the north end of the city.”

Savage also noted the location is a good place for higher buildings. Without being specific, however, he noted that the site is outside of the view planes and therefore has only city-planning restrictions as outlined in HRM By Design , a detailed city-planning document that was completed in 2012. He said he’s in favour of densifying the area and indicated he likes height to achieve this goal rather than lower structures. He wants the project to free ground space for pedestrian access, but he also wants to make it “interesting.” This would include innovation in design, making the new space accessible to a variety of people to live, work, shop, and play.

Savage has identified that risks associated with construction and final development should be passed onto future private-sector partners, who are better able to handle these types of risks than the city.

In the initial phase, the Cogswell plan calls for the complete demolition of the current roadbeds, at an estimated cost of about $45 million. The roads will be realigned with the demolition and road realignment expenses being in part recouped by the sale of the developable portion of the lands and associated development charges coupled with future property-tax revenues.

Jane Fraser, director of operations support with the City of Halifax, said she is excited that city leaders, including the mayor and councillors, are focusing on the downtown core. She noted that Halifax leaders are engaged in redefining Halifax as the Atlantic leader in economic, industrial, and cultural sectors.

She noted that council has been very methodical in its approach, letting both factual and technical issues lead the project-planning process. City council has agreed on a set of goals, but want to let the design come from the development community, with the only proviso being that city-planning guidelines be followed, without council being overly proscriptive. Fraser indicated the project should allow for the renewed plan to allow for a “signature gateway” linking the downtown core with the north end, the Naval Dockyards, two harbour bridges, and the Irving Shipyards. (The Irving Shipyards have been awarded a $25-billion, multi-decade federal contract to build the Canadian Navy’s new frigate fleet. This contract is expected to employ thousands of skilled workers.)

The realignment will also open access to the harbour walkways, Casino Nova Scotia, the Purdy’s Wharf office complex, and the Halifax Marriott Harbourfront Hotel, which currently have difficult access and egress roadways due to the blockages erected to support the interchange. Realigning the road systems will drastically improve accessibility to these major buildings for business, recreation, and tourism purposes. It will also further re-engage the city with the working waterfront, improving quality of life for those living and working downtown.

Halifax renaissance
Currently, Halifax is in the midst of a renaissance in the form of a building boom in the downtown core. After 20 years of few projects other than apartment and condo developments, redevelopment is happening in the commercial area at the Royal Bank building, which is planned to be demolished, and the CIBC and TD complexes. The face of downtown Halifax is rapidly changing.

The recent opening of the new Halifax Library on a former parking lot on Spring Garden Road, which holds an award-winning design with advanced environmental-design features, is helping to redefine the city core. As well, the construction of the estimated $500-million Nova Centre, which is underway at the heart of the Argyle Street entertainment and business district, is the largest integrated development project in Nova Scotia’s history.

Getting it done
Andy Fillmore, VP of planning and development with the Waterfront Development Corp., led the public consultation process for the Cogswell Street Interchange project. Formerly a city planner—with experience in many large projects, including stints as the project manager for the development of HRM By Design in Halifax and the Big Dig transit mega-project in Boston—said this project “has been a fascinating thing to be involved in.” The vision and strategy includes collaboration across both the private and public sectors, which he believes is critical to success. Ultimately, he wants to get people back on the street enjoying a vibrant cityscape.

The total Cogswell project area encompasses about 16 acres. Of this total, about six are required for road realignment, public-transit facilities, bike paths, and pedestrian walkways. The city has identified a desire for parkland, which could encompass up to an additional four acres, leaving a minimum of six for private-sector development.

How this remaining land will be developed is unknown, with the city wanting to allow the private sector to play a major role in determining the density and ultimate mix of building types. However, the city would like to see more people living in the downtown core and recognizes this will require the provision of services like schools and recreation facilities. These supports have largely disappeared over the past 40 years due to declining population density in the older parts of the city.

The city expects this project to build out over the next six to 12 years, giving time first to complete the roadway demolition, realign the road network, and complete the underground infrastructure improvements required to support these ambitious plans. But as is now clear, Halifax is in a building renaissance—and it is now time for the city to take its place amongst the major Canadian urban centres.

Cynthia Robertson and Stanley Strug are both with Halifax-based Parkridge Consulting.