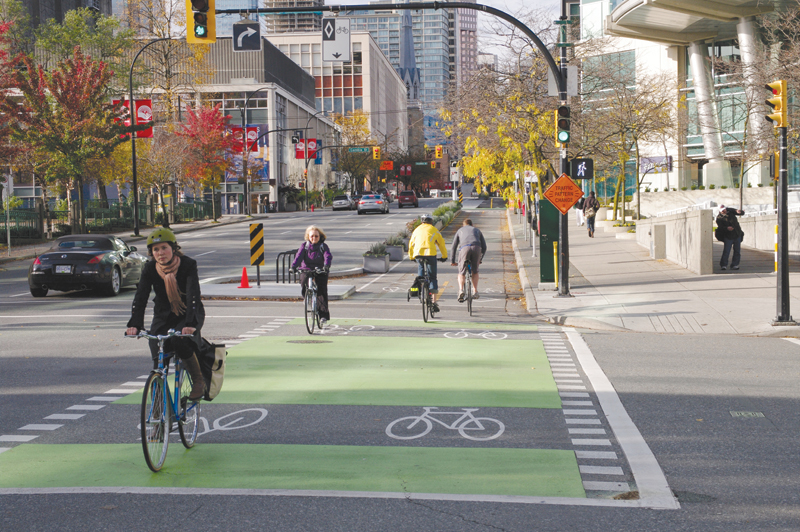 With aging populations and rising health-care costs becoming a reality for Canada, the need for tangible, realistic ways to keep Canadians healthy and fit is becoming more evident. A sedentary lifestyle is a significant contributing factor to some of today’s more prevalent chronic health issues, and a 2012 University of British Columbia report funded by TransLink and Vancouver Coastal Health (VCH) noted that chronic conditions, such as obesity, already produce more than $860 million in direct and indirect health-care costs annually in British Columbia alone.

While there is no easy solution to complex issues of public health, there is evidence that sustainable, well-planned transportation infrastructure can encourage a fitter Canada. With this information in hand, some organizations are calling for substantial funding for bicycle and pedestrian infrastructure in Canada. A June 2013 letter from the Ontario Medical Association (OMA), for example, requested that infrastructure funding to improve cyclist safety not be omitted from ongoing discussions over Metrolinx’s expanded transit strategy.

“It’s time to make a strong commitment to cycling infrastructure,” OMA president Scott Wooder said in the release. “A safe cycling system benefits everyone, including drivers and transit riders.”

Healthy transportation choices are not limited to walking or riding a bicycle, however. Dr. Patricia Daly explains that mass transit has health benefits as well.

“Transit contributes to active transportation because we know that people who use transit walk more than people who don’t,” says the chief medical health officer and VP of public health at VCH. “They need to get to their stops, or between stops, so we encourage in transportation planning anything that will make it easier for people to use active transportation. It’s much easier to incorporate physical activity into your daily routine rather than having to do it separately. We know, although the research is new on this, that in walkable neighbourhoods, where people are spending less time in their cars, they’re at lower risk of becoming obese.”

Daly notes that while infrastructure aimed at promoting walking and bicycling is important, it doesn’t have the far-reaching impact that a comprehensive transit system does.

Daly believes increased cooperation and communication between public-health officials and community planners can have a positive impact on the overall well-being of a community. “I think this is a very exciting time in public health. We’re finally going to be able to come together with people who plan communities, and a community’s design and plan can actually improve the health of the population.”

Clark Kingsbury is an editorial assistant with ReNew Canada.