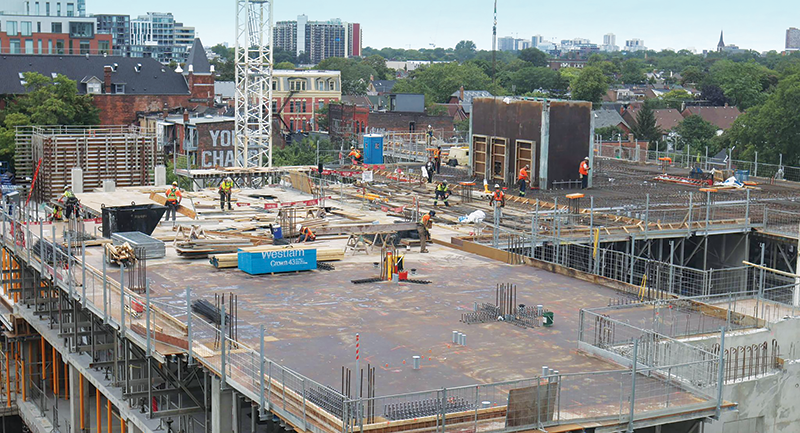 This past September, we released Infrastructure Ontario’s (IO) 2019 Fall Market Update. The pipeline of major infrastructure projects is our largest and confirms Ontario’s leadership in building and renewing critical infrastructure. When complete, these investments in our transit, transportation, health, and justice infrastructure will transform Ontario. At the same time, these projects generate jobs in the skilled trades as well as the engineering, design and finance sectors.

To ensure success, we continuously look for ways to deliver these important public projects in ways that adapt lessons learned and recognize the changing nature of our projects and industry as a whole. In the last year, IO has made improvements to its project delivery approach to increase competition and innovation in Ontario’s major infrastructure projects. The changes are the result of industry outreach by both the Minister of Infrastructure’s Office and IO. Ultimately, the goals of these changes are to be more open to innovation, more open to competition and to deliver more value for taxpayers.

The improvements we have made include rebalancing the bid scoring system to better reward innovation. Also, we have moved toward more outcome-based specifications versus output specifications that will help capitalize on private sector innovation. Finally, we have adjusted qualifications assessments to give fairer weight to international experience encouraging international investment and participation in the Ontario market.

Since their introduction, we have already been able to put these innovations to work. To provide an example of how this works in the real world, here are two examples, the Halton Region Consolidated Courthouse, and the GO Transit On-Corridor procurements.

The Halton Region Consolidated Courthouse is IO’s seventh P3 courthouse. It will consolidate two existing facilities and will have 25 courtrooms. With five courthouses already complete and the New Toronto Courthouse project already under construction, we saw an opportunity to stretch the boundaries and challenge the market to deliver both the best design and the best value for money.

To drive innovation in the Halton Courthouse procurement, designers were empowered to give teams more freedom when organizing their Design Presentation Meetings (DPMs). Also, more interaction was encouraged with sponsors to help share creativity and innovation during the DPM process, and solicit feedback fostering a holistic approach that integrated operational excellence and efficiency into the design. In the second phase of the RFP, we modified the prescriptiveness of design development agendas in our documents to allow for more innovative ideas, better in-market dialogue, and to create more opportunities for executive-level decision-making.

All-day regular GO train service is a key component of provincial plans to improved regional transit in the GTHA. The Go Transit On-Corridor project procurements for the expansion and maintenance of large portions of the GO network will make this possible as the region continues to expand and demand increases.

Given the highly integrated nature of the network in design, construction, and operation, it was clear that a DBFOM model made the most sense. In essence, this requires us to think beyond delivering a project as we traditionally view them and more as providing a ‘system.’ We went beyond our usual ‘Value for Money’ analysis to select the appropriate delivery model based on benefit-based decision-making, as well as qualitative and quantitative analysis. This approach will allow for improved efficiency of the rail system, cost reduction, and a reduction in the implementation by effectively managing the project’s two greatest risks: systems integration risk, and the risk associated with implementing a large capital project using alternative train services on an active rail network.

That said, a 30-year P3 model for a project of this nature carries significant challenges. Most notably, the sheer size and financing requirements for a project of this scope and magnitude. And the fact it’s a living, evolving network, unlikely to remain static for 30 years. There are significant elements of legacy infrastructure and rolling stock complex interactions with third parties. To address these issues, we had to look at ways to innovate and improve our procurement model. Before releasing the request for qualifications (RFQ) in 2018, IO and Metrolinx undertook a significant market sounding exercise. We consulted with more than 50 firms interested in participating in the GO Transit On-Corridor Project. We gathered feedback that would allow us to refine the project delivery model in advance of commencing the formal procurement process. One specific item that we heard from the market was to facilitate introductions and team formations. IO worked with the Project Sponsors to develop a GO Expansion Rail List. Firms could be added to the list, provide contact information, as well as their capacity to participate in a bidding team. The list was updated and distributed to all parties monthly. Furthermore, several update packages were provided to demonstrate the Sponsors’ openness to change to address major concerns raised by participants in the market.

IO and Metrolinx facilitated commercially confidential meetings during the RFQ and provided detailed information to RFQ applicants—more than what we have typically done in previous procurements. The testing of ideas and commercial positions included the use of white papers as part of reference concept planning, on such topics as safety and regulatory principles, operations and passenger service requirements. For the first time, we also facilitated site tours to allow bidding teams to visit various Metrolinx facilities, including Willowbrook, and Whitby maintenance facilities, as well as Union Station and it’s signal towers so that they could familiarize themselves with the GO Transit system.

The GO Transit On-Corridor RFP process that we undertook was perhaps the most significant innovation, whereby we developed a P3 contract with minimal prescriptiveness. Unlike other contracts, the On-Corridor Works Project is a performance-based contract to deliver train service. Metrolinx and IO will outline the service requirements for the GO Transit system (for example, passenger capacity levels, comfort requirements, etc.) while the proponents bidding on the contract are to develop service plans that outline such items as time tables, fixed infrastructure, fleet and train crew, and maintenance strategy. New technologies and innovations allowed bidders the opportunity test new ideas in their bid submissions. IO has undertaken a broader effort in the last year and continuing to standardize the drafting and approach to our project-specific output specifications—to make them less prescriptive and more open to new ideas.

We look forward to continuing to implement new and innovative ideas through the procurement of this project.

As an international leader in public-private partnerships, IO believes it is critical to continue the evolution of the model to allow more innovation and competition to meet today’s realities. These changes are being made to ensure that Ontario remains a destination for the global infrastructure community.

This article originally appeared in the November/December 2019 edition of ReNew Canada.