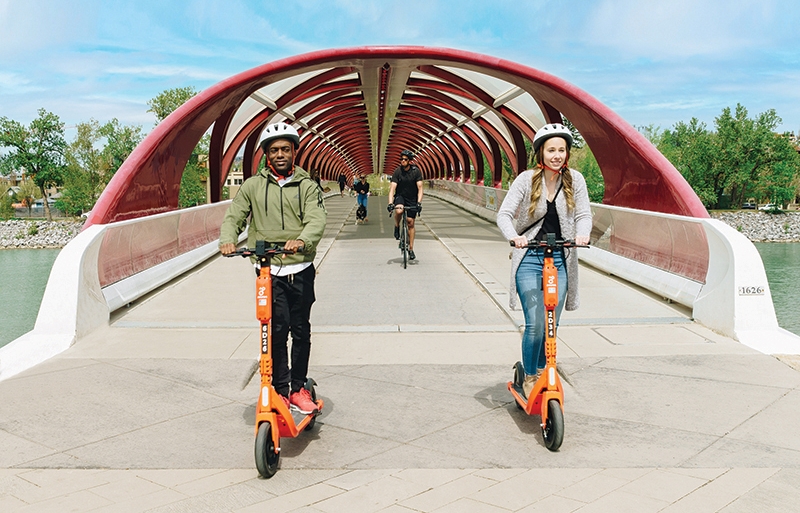 When Statistics Canada began unveiling the results of the 2021 Census earlier this year, one of the areas that anyone in city planning, municipal government, transportation, or infrastructure was looking for was finally published—hard-data evidence of an important trend that many of us are seeing firsthand.

You could call it the “downtown rebound.”

According to the census data, downtown Halifax’s population soared by 26 per cent between 2016 and 2021. Montreal (24 per cent), Calgary (21 per cent), and Toronto (16 per cent) weren’t far behind. In total, 36 of the top 42 urban centres across the country saw their downtown populations rise during this census cycle.

In fact, the sum of all large urban centre downtowns grew nearly twice as fast (11 per cent) than the cities as a whole (six per cent). They also grew at twice the pace as they did in the previous census cycle (4.6 per cent).

All of this is great news for landlords of downtown residential properties or owners of businesses that previously earned 80 per cent of their revenue between 8 a.m. and 6 p.m. on weekdays. But the influx of full-time residents means that infrastructure that once served a reliable (if uneven) schedule is now being pushed to the brink under increased 24/7 demand.

Nowhere is that more evident than in transportation.

It only takes a quick glance around cities to see the billions of dollars being pumped into transit projects to service increased demand from urbanites who want to access and move through the communities they live in.

The Eglinton LRT, Scarborough Subway Extension and Ontario Line in Toronto. The REM in Montreal. The Broadway Subway Project in Metro Vancouver and major LRT projects in Mississauga, Brampton, and Hamilton. These projects alone translate to roughly $40 billion in costs designed to improve mobility throughout major urban centres, making it easier to get into downtown cores. But what those billions of infrastructure dollars will not do—which comes as no shock to anyone in transportation or government—is make it any easier to move throughout those downtown cores.

Along with the urgency to address environmental and climate change concerns, that is one of the reasons why so many cities are actively prioritizing micromobility programs today, and why providing a range of alternative transportation and mobility solutions will become increasingly important for cities for years to come.

The two most popular modes—e-scooters and e-bikes—have seen a surge in interest over the past half decade, across North America and around the globe. That’s because they provide a safe and convenient transportation option for residents and tourists while helping to ease clogged roadways and frustrating travel delays in cities where shared rental models have been introduced.

A comparatively low-cost, safe, and easy-to-adopt mode of shared transportation for most people, both e-scooters and e-bikes are gaining popularity in Canadian municipalities as they aim to enhance and alleviate public transit in urban centres. In 2021, there were more than 10 shared e-scooter and e-bike programs launched across the country; 2022 could see as many as 10 more new programs join them.

Offsetting congestion and pollution in cities

We know that urban transport is responsible for a substantial portion of global GHG emissions and micromobility, powered by electric devices, can help cities meet their emissions reduction targets.

There is an endless string of numbers available that highlight the benefit that micromobility is already having in Canadian cities, as a central piece of the transport electrification puzzle. In 2021 alone we saw more than 100,000 Canadians use our e-scooters, collectively travelling more than 1.2 million kilometers. Beyond just getting around, those riders also directly supported their local economies with more than three-in five trips including a purchase from a local business.

Among the most impactful figures are the direct environmental benefit that e-scooters present as a part of a city’s transportation system, namely the percentage of car journeys offset by battery-powered e-scooter use, and the estimated carbon offset stemming from that.

When we polled our 2021 riders across the four Canadian cities where we operate (Calgary, Ottawa, Vernon, and Red Deer), we learned that nearly half of all trips using a Neuron e-scooter replaced a car journey. This adoption of e-scooters by local riders led to over 232,000 car rides avoided and an estimated 91 tonnes of CO2 averted.  That is a huge number for a service area within four cities with plenty of room for growth.

Now imagine what that figure would be across all major and mid-sized urban markets in Canada, and the environmental benefit of incorporating micromobility into active transportation plans becomes even more clear. Those are projectable figures that participating cities can recognize as achievements against their own green initiatives and objectives, supporting their broader sustainability efforts.

Density is another key driver for why transportation programs and systems need to take new approaches to solve old problems. Toronto, Vancouver, and Montréal lead the way in downtown density, but Ottawa and Edmonton are not far behind. These downtown cores were built with far fewer people and vehicles in mind.

Downtown density and better livability have been factors for why European cities like Paris, Brussels and Glasgow are closing their downtown cores to cars, favouring only public transport and micromobility in these high-traffic areas. E-scooters make sense in these markets because they take advantage of the existing, often underutilized infrastructure effectively—namely roadways and/or designated bike lanes—to move more people from point A to point B. And because of their much smaller size, they have the added benefit of requiring less space for both operation and parking. While Canadian cities look for long-term ways to reshape their infrastructure to better promote active transportation, e-scooters can bridge that gap between then and now.

Because e-scooters by nature aren’t designed for extremely long travel distances, they typically also end up complementing a city’s existing transit system rather than outright replacing it. Many Neuron riders have told us they often use our e-scooters as an improved “last mile” transportation option between their workplace or home and city transit to travel longer distances.

Lastly, shared e-scooter fleets can be consistently upgraded with new technology, adding sensors that help with rider and pedestrian safety, geofencing, proper riding enforcement, and numerous other operational benefits. That creates a trove of valuable, anonymized rider data that can be captured by operators like Neuron and shared with cities to help with current and future planning needs. Every ride is a survey sample producing valuable data that otherwise would take months or more to collect—if it was captured at all. The cost savings and value of this data alone make these programs extremely beneficial.

Each year the number of voters telling their cities that they want to see these issues addressed is growing. They’re calling on municipal officials to launch programs that will make their cities more livable and accessible. It should therefore come as no surprise that each year the number of cities evaluating shared micromobility programs is growing.

Already some of Canada’s largest cities like Calgary, Edmonton and Ottawa have run e-scooter programs for multiple seasons. Cities like Vancouver, Brampton, Mississauga, and Hamilton are exploring launching their own. A number of other leading cities like Vernon, Red Deer, Lethbridge and others are jumping aboard. It is not out of reach to think that the number of Canadian cities running shared e-scooter programs could pass 100 before the midway point of the decade.

Riders themselves say their cities are better for these programs. Our 2021 end-of-year rider survey showed most riders across Canada—nine out of 10—believe that e-scooters have had a positive impact on their community. That’s an overwhelming vote of confidence for the forward-thinking municipalities, city councils and city program managers that have been the driving force behind the integration of innovative shared micromobility programs into their city’s transportation systems.

Ankush Karwal is head of market, Canada for Neuron Mobility.

Featured image: A comparatively low-cost, safe, and easy-to-adopt mode of shared transportation for most people, both e-scooters and e-bikes are gaining popularity in Canadian municipalities. (Neuron Mobility)