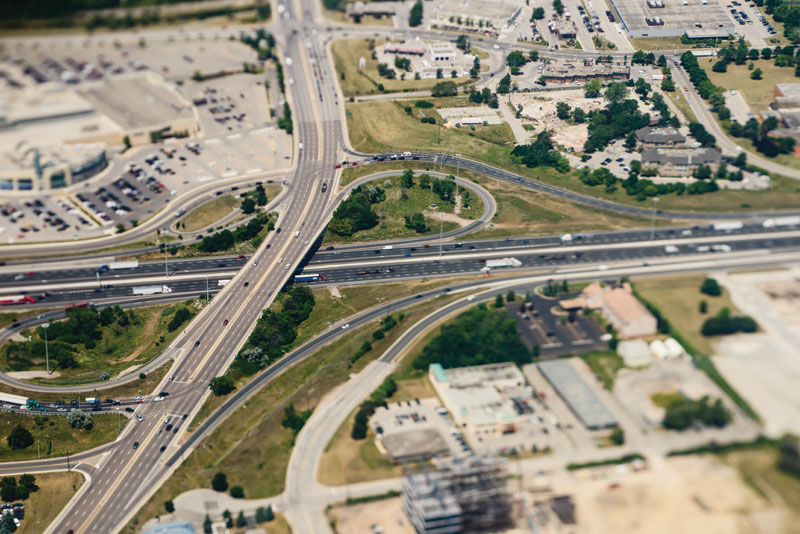 It’s no secret that Canada faces many challenges related to its transportation infrastructure. The first-ever report card on the state of the nation’s infrastructure health, released in 2012, revealed that more than 50 per cent of municipal roads across the country are in “fair to very poor” condition. Moreover, our infrastructure is rapidly aging—the number of bridges on the National Highway System that surpassed the 50-year mark rose dramatically from 870 to 1,318 between 2006 and 2010.

Cold climates, frequent salting, and heavy use further threaten the reliability of the transportation infrastructure we rely on every day. And with municipalities responsible for covering 60 per cent of their infrastructure costs, coming up with the funds necessary each year to replace and expand essential infrastructure is an ongoing challenge. As such, finding cost-effective, efficient methods for monitoring and rehabilitating existing infrastructure has become vitally important.

New approach to an old problem
South of the border, a large amount of resources has been invested into researching non-traditional methods for infrastructure evaluation and preventative maintenance. With a vast number of U.S. bridge decks considered in poor structural condition, there was a nationally recognized need to improve existing methods for assessing the condition of roads and bridges. As such, in 2005, the U.S. Transportation Research Board, on behalf of the National Research Council (NRC), launched a body of research known as the Strategic Highway Research Program (SHRP2).

The research evaluates the effectiveness of applying various non-destructive techniques, such as ground penetrating radar (GPR), impact echo, ultrasonic surface waves, and electrical resistivity, among others, to capture subsurface data on corrosion, delamination, vertical cracking, and concrete degradation. Traditionally, this data would be captured through intrusive techniques like coring (which can be costly and disruptive to traffic flow) or chain dragging and hammer sounding (which often rely on the operator’s skill level and training).

See also  On the Marine Highway

Ground penetrating radar
Of the non-destructive techniques evaluated in the SHRP2 report, GPR ranked highest in overall value for assessing bridge deck deterioration based on accuracy, precision, speed, ease of use, and cost. GPR is a technology that transmits high-frequency radio waves into the ground or structure and analyzes the reflected velocity and energy to create a profile of the subsurface features. The reflections are caused by a contrast in the electrical properties of subsurface materials that can be indicative of changes in water content, void spaces in the ground, rebar or post tension cable corrosion, asphalt deterioration, and other factors.

Combined with inspection data acquired through traditional destructive testing, GPR provides a substantive dataset on subsurface conditions that supports a better understanding of life-cycle costs, causes of deterioration, and the effectiveness of maintenance efforts throughout the aging process. Unlike traditional inspection methods and other non-destructive techniques, GPR data can be collected at highway speeds, removing additional impact on traffic.

“A challenge with traditional field testing methods is that they normally require temporary lane reductions or closures, resulting in added costs and inconvenience for the road users,” said Dan Conte, senior bridge engineer with URS Canada Inc. “GPR data can be collected in a matter of hours versus days, and often without disrupting the flow of traffic.”

Though adoption of the technique has been slower in Canada, it is steadily beginning to gain traction. As municipalities increasingly outsource highway maintenance and bridge inspections, engineering firms are finding new ways to innovate and differentiate themselves in the bidding process. Harnessing advanced tools like GPR is an effective way to do this, and as such, the technology is starting to surface in large projects across the country.

The GPR surveys were used in conjunction with traditional condition surveys to collect information on a variety of factors including asphalt thickness, adhesion and condition of waterproofing membranes, chloride penetration depth, as well as the location and condition of post-tensioning cables.

Bridge deck deterioration was also mapped across a vast area. Concrete bridge deck deterioration usually occurs when the reinforcing steel inside the concrete has become corroded. This is generally worsened by saline water that can seep into the concrete, causing cracking and delamination. Analyzing GPR data from localized targets makes it possible to estimate the extent of the corrosion across the bridge deck.

“GPR evaluation provides us with an additional dataset that can be cross-compared and correlated with results from traditional condition survey techniques,” Conte said. “The GPR results allow us to readily identify locations of suspected deterioration so that we can follow up with targeted destructive sampling. Information obtained from both surveys increases our confidence in the location, extent, and severity of the deterioration in the bridge deck.”

Once extracted, core samples can be further analyzed to check for internal cracks in the concrete, observe the level of rust on the reinforcement bars, estimate chloride content, and determine the overall strength of the concrete. Data gleaned from the core sampling and analysis can also be calibrated with the GPR data to verify accuracy.

Detecting hidden anomalies
Applied Research Associates Inc. (ARA), an international scientific research and engineering firm, has also applied GPR to many rehabilitation projects, including a survey for Spragues Road in the Regional Municipality of Waterloo.

The survey was targeted toward finding the thickness of the asphalt layer as well as the extent and thickness of the plain cement concrete (PCC) layer below the asphalt. Subsurface data was picked up along the north and southbound lanes and viewed in real time so the information could be interpreted on site. Variations of asphalt and PCC thickness were determined and the data was then calibrated with core samples taken by ARA. The survey was performed at the road speed limit to avoid lane closures.

See also  Come What May

“Common field investigations often rely on discrete, widely spaced sampling, which provides limited information: it is assumed that the data residing between discrete points is consistent, but this is not always the case,” ARA senior pavement engineer Anne Holt said. “GPR data fills in these information gaps and allows more data to be captured with less drilling. Subsurface conditions can be thoroughly checked every metre along the road.”

When a road has been repaved, anomalies can exist deep below the surface that may go unnoticed, such as pockets of air in the concrete or steel dowel bars that have been applied to correct cracked pavement in the past. During a rehabilitation project, it is imperative to be aware of these irregularities because they can potentially affect structural capacity over time and lead to weaknesses in a bridge or road.

GPR offers multiple frequencies and depths to shed light on what is occurring down below. The data can be taken from a variety of positions, such as the right wheel path and centre lane, to get a representative data sample and pick up on variations along the way without having to drill multiple holes.

“Many irregularities that exist beneath the surface can threaten the amount of weight that the road can bear, and these anomalies need to be caught early in order to avoid a potential disaster,” Holt said. “It’s all about planning and knowing ahead of time if issues exist so that you can make the right rehabilitation decisions and avoid unpleasant surprises in the future.”