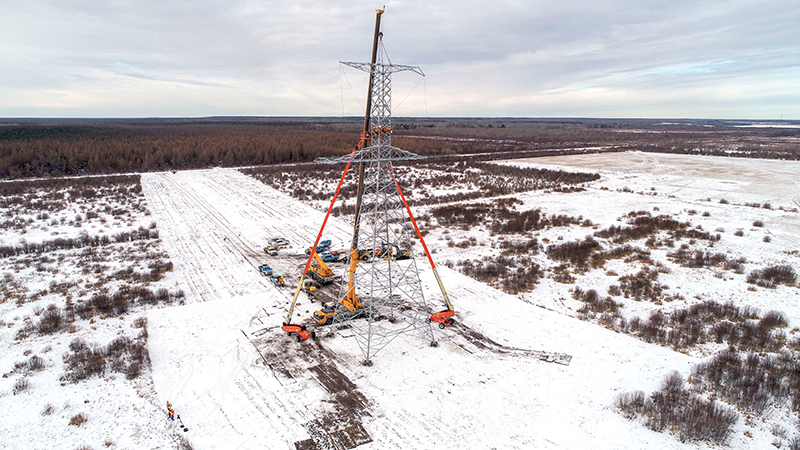 After more than 10 years of planning and regulatory hurdles, the Manitoba–Minnesota Transmission Project (MMTP) went into service on June 1, 2020. The MMTP is a 213-kilometre, 500-kilovolt AC transmission line built to deliver additional electricity to Manitoba Hydro’s neighbour to the south, Minnesota Power.

The transmission line starts at the Dorsey converter station located near Rosser, northwest of Winnipeg, travels south around Winnipeg and passes near the Riel Station (east of the city) along what is known as the Southern Loop corridor. It then continues south to the Manitoba–Minnesota border and connects to the Great Northern Transmission Line (constructed by Minnesota Power), the name of the line on the U.S. side of the border to which MMTP is connected. The line terminates at Iron Range Station located northwest of Duluth, Minn. The cost for the MMTP was approximately $490 million.

“The new interconnection strengthens the overall reliability of Manitoba’s electricity supply, allows Manitoba Hydro to fulfill current export sales agreements and increases access to markets in the United States,” said Riley McDonald, media relations for Manitoba Hydro. “In just under eight months, Manitoba Hydro and its contractors constructed 502 towers, strung them, and connected it to the regional grid—all over some boggy and challenging terrain. MMTP’s completion on-time and on-budget was a triumph in the face of weather hurdles, a compressed construction schedule due to regulatory approvals, and a global pandemic.”

Eryn Brown, project manager for MMTP, says there were several challenging aspects that needed to be overcome to get this impressive piece of infrastructure over  the finish line.

“All the work on preparatory materials and on the regulatory front, and the great efforts that went into all the stakeholder engagement—and then there was the battle with a shortened construction schedule (from an expected two to three years down to just eight months), heavy rainfall at the beginning of construction, and a pandemic at the end,” Brown said. “All this, and to still come in on schedule and on budget — that’s a testament to the amazing abilities of the team and the staff who worked on MMTP from all phases of the project.”

To get the green light for the MMTP, Manitoba Hydro needed to obtain approvals on both the provincial and federal levels.

“Provincially, the project is a Class 3 development under the Manitoba Environment Act, which required a comprehensive scoping process and Environmental Impact Statement (EIS). A Clean Environment Commission Hearing was held and recommendations from that body informed the Environment Act Licence that was ultimately issued at the provincial level,” Brown explained. “Federally, because the project is an international power line and affected an existing international power line (Riel IPL), a Federal Certificate was required. This required a comprehensive federal application and a public hearing with the Canada Energy Regulator (previously known as the National Energy Board, or NEB). The project needed to meet requirements of both the NEB Act (now the CER Act) and the Canadian Environmental Assessment Act.”

“In the U.S., Minnesota Power was responsible for acquiring the state and federal approvals to construct the Great Northern Transmission Project,” Brown adds.

The construction of the MMTP had to be managed through an unusually wet fall season. This created challenges for getting heavy equipment onto the project site.

“Construction access matting was deployed heavily across the project and there were over 30,000 mats deployed over areas of the 214-kilometre long transmission line,” Brown says.

An early winter storm with a significant snowfall took place in October, which forced construction to slow down while contractors dug themselves out of it.

“Weather was more favourable after this. The ground froze in early November, which allowed contractors access to most areas of the project site under frozen conditions,” Brown says. “Winter temperatures were not unseasonably cold or warm—both of which would have made working more difficult—and spring thaw wasn’t until the end of March, which gave the contractor an extended season across the entire project area.”

After the MMTP went into service on June 1, the work wasn’t quite complete. There was still cleanup and deficiency work on the line that needed to be performed, as well as additional commissioning of station equipment. Although the COVID-19 coronavirus pandemic was declared partway through the construction of the project, it did not cause any delays.

“We scheduled that work during two different outages in October and was completed faster than expected and without any issue,” Brown said. “All COVID-19 protocols were in place during this work and construction staff were able to complete all tasks on time.”

After spending more than a decade on a massive infrastructure project, there are always lessons learned from the experience that can carry over to working on and managing future projects. For Brown, the construction of the MMTP showed the value of solid planning.

“As with any large project, planning ahead and anticipating delays is key. One of the biggest lessons we learned is that through careful planning and diligent work, our teams and contractors are capable of doing great things in short periods of time,” Brown says.

Andrew Snook is a freelance business-to-business writer based in Mississauga, Ont.

Featured image caption: After a difficult start to the fall construction season, a freeze in November allowed construction teams to access much of the area needed in order to build the transmission line. Photo from Manitoba Hydro.