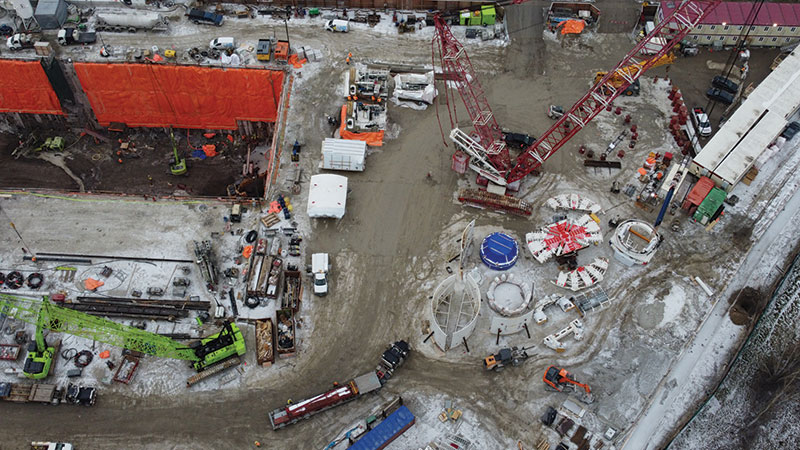 Headwalls are underground support structures made up of a series of concrete columns, called piles, that create a watertight wall around the area of future subway stations and emergency exit buildings. These piles will be drilled into the ground using large drill rigs, which are usually over 33 metres high.

Responsible for designing and constructing the tunnel for the Scarborough Subway Extension, is a consortium led by Strabag. Part of the advanced tunnel contract, this includes designing and building the launch and extraction shafts and supplying the tunnel boring machine.

Metrolinx and Infrastructure Ontario issued a Request for Proposals (RFPs) in February for the Stations, Rail and Systems (SRS) package for the project. Three teams—Dragados, KSX Integrated Design-Builders, and Scarborough Transit Connect—were shortlisted and invited to bid on the package, which is being delivered using a Progressive Design-Build delivery model.

The 7.8-kilometre subway extension is part of the Province of Ontario’s $28.5 billion subway expansion program, which also includes the Ontario Line, the Yonge North Subway Extension, and the Eglinton Crosstown West Extension.

Crews will build headwalls at 12 sites along the project route. All of them must be built before the project’s tunnel boring machine—Diggy Scardust—arrives at each location. Construction for the first headwall began just south of the launch shaft site at Sheppard Avenue East and McCowan Road.

Similar to the ones installed at the launch shaft site last summer to prepare for excavation, piles will be drilled into the ground using large drill rigs.

Approximately 19 piles will be required for each headwall.

“As the tunnel boring machine travels underground from the launch shaft site, it will bore through these headwalls, leaving behind the frames for stations and emergency exit buildings we’ll build later,” said Andrej Butala, headwall manager for the project.

At each future station and emergency exit building site, crews will be installing a pair of headwalls to mark where the buildings will start and end. After the tunnel boring machine bores through these headwalls and tunnelling is completed, the successful stations, rail and systems (SRS) contractor will use the headwalls as frames to complete building the future stations and emergency exit buildings.

The headwalls need to go deeper than the future tunnels to ensure water and soil don’t disrupt the area during tunnelling or construction.

Butala said each pile will be drilled roughly 40 metres underground and a single drill rig will be used at most sites to complete this work.

It will take crews roughly four to six months to build each headwall, and work will also involve utility relocations.

Metrolinx broke ground on the subway project last June with construction of a foundational wall around the launch shaft, which meant a massive hole—about 28 metres wide, 80 metres long and 30 metres deep—was dug before excavation could begin.

To keep such a massive excavation open and safe for the duration of construction and tunnelling, some special excavation supports need to be drilled into the ground with the drill rigs. Strabag installed these supports, commonly referred to in the construction industry as a shoring system. The type of shoring system being used for the Scarborough Subway Extension launch shaft is called a secant pile shoring system.

The installation of this secant pile shoring system marked the beginning of the excavation process at the launch shaft site and the official start of construction.

After the secant piles were drilled and the shoring system fully installed, crews excavated the area in anticipation of the arrival of the tunnel boring machine, which is currently being assembled on site.

Joshua Patel is a senior advisor, for subway programs at Metrolinx.