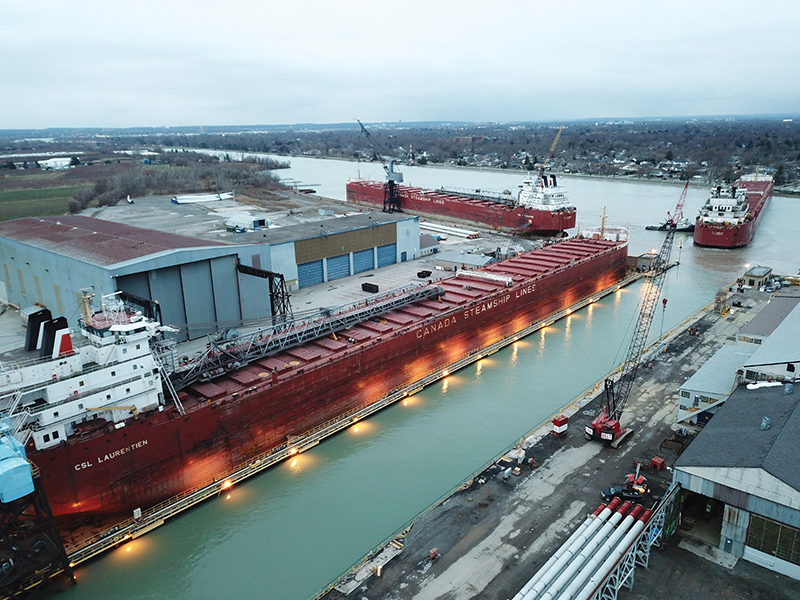 The National Shipbuilding Strategy is driving a renaissance in Canada’s shipbuilding industry.

Fueled by federal government contracts to replace the Royal Canadian Navy and Canadian Coast Guard fleets, and billions in investments by shipyards eager to perform, Canada’s marine and shipbuilding industries are rebuilding, with long-term implications.

When asked to think about our shipbuilding heritage, Canadians likely zero in on the Bluenose, immortalized on the Canadian dime. Yet the original copy of that sailing ship was built in 1921, 20 years before 15 shipyards on the east and west coasts roared into action, constructing over 400 merchant ships for the war effort, according to the 1999 book A Great Fleet of Ships, by S.C. Heal.

The war ended and decades of decline in the shipbuilding industry followed. The industry’s fate was sealed with the lifting of a 25 per cent import duty on certain types of ships in 2010, says Ted Kirkpatrick, director of business development and government relations with Hamilton-based Heddle Shipyards.

“The year 2010 was the [last] nail in the coffin for the Canadian shipbuilding industry,” he says. “All the major shipyards went through periods of closing and opening, closing and opening and there were a number of bankruptcies. A lack of domestic demand, the surge of state-owned, heavily subsidized international shipyards, combined with the removal of the tariff ultimately eliminated what remained of Canada’s shipbuilding capacity.”

But 2010 also brought the promise of salvation with the launch of the National Shipbuilding Strategy (NSS). Its mandate was to equip the Navy and Coast Guard with new vessels built in Canadian shipyards and repower the industry for the long term.

By the end of 2020 the NSS had awarded $17.34-billion worth of contracts to Canadian companies, from the shipyard giants on down.

According to the federal government, “The National Shipbuilding Strategy is helping restore our shipyards, rebuild our marine industry, and create sustainable jobs in Canada while ensuring our sovereignty and protecting our interests at home  and abroad.”

The largest vessels will be built at Seaspan Shipyards in Vancouver, Davie Shipbuilding in Quebec, and Irving Shipbuilding Inc. in Halifax. All other Canadian shipyards can compete for work under the second and third pillars.

But a few examples: Davie has a maintenance and upgrade program for Navy frigates and will build six ice breakers for the Coast Guard, among other big-ticket projects; Seaspan Shipyards has built three Offshore Fisheries Science Vessels and will build up to 22 ships in four different classes.  This includes one for the Royal Canadian Navy’s Joint Support Ship (JSS) program, which “… is the largest naval ship by length ever to be built in Canada,” says Amy MacLeod, vice president of Corporate Affairs, Seaspan Shipyards.

Last year, Irving delivered the HMCS Harry DeWolf, the first of six new Arctic and Offshore Patrol Vessels. At 103.6 metres, the DeWolf is the largest Navy vessel built in Canada in 50 years, and the largest combat ship ever built in Canada, according to ISI. Other work on the books at Irving are worth more than $60 billion over the next 30 years.

This past May, the federal government announced it would have two icebreakers built—one by Seaspan, the other by Davie—for Coast Guard operations in the high Arctic.

The NSS has far-reaching implications, not only for Canadian shipyards, but for tens of thousands of people with many skill sets, and for the thousands of companies in the supply chain.

Colin Cooke is the president and CEO of the Canadian Marine Industries Shipbuilding Association (CMISA), formed in 2018 as a more inclusive voice to replace the now-defunct Canadian Shipbuilders Association (CSA). “The CSA was by shipyards, for shipyards. CMISA makes sure that the entire marine sector is included. There is a whole ecosystem.”

Kirkpatrick adds: “It takes a village, a lot of support, from consumables, electrical, coatings, interior work, fire safety systems … the contribution of local suppliers and sub-contractors to any of our projects. There is a lot of expertise in Canada.”

Cooke is mapping this ecosystem. He estimates that eight to 12 shipyards are actively involved in the NSS, including, Hike Metal Products Ltd., Canada Maritime Engineering Ltd., MetalCraft Marine, and Ocean Group.

As for Canadian suppliers, Davie, for example, has posted that it has over 1,300.

Our shipyards have not been counting seagulls and rattling tin cups since 2010, either. Monaco-based Inocea Group, which purchased Davie in 2012, has invested more than $1 billion dollars on everything from equipment to IT infrastructure to safety teams.

Seaspan Shipyards purpose-built an entire shipyard in Vancouver to deliver ships under the NSS. Irving invested $350 million to tear down (the old) and build a new facility at the Halifax Shipyard, which, it notes, “is the most modern and largest under-roof shipbuilding facility in North America.”

In 2016 Heddle, which owns the Hamilton Shipyard, purchased the shuttered Lakehead Marine & Industrial Inc. shipyard in Thunder Bay and began leasing the Port Weller Drydock in 2017. Heddle has been re-equipping both, purchasing Thunder Bay-based Fabmar Metals Inc., which is relocating to the Thunder Bay shipyard—outlays all attributable, in large part, to the optimism created by the NSS, according to Kirkpatrick.

Irving Shipbuilding reports that it and its major subcontractors have more than $4.3 billion in spending commitments with more than 325 organizations across the country.

Each of the big three shipyards is also giving back in the form of projects such as Davie’s National Icebreaker Centre, a hub for polar technologies and Arctic expertise.

Seaspan recently funded a new faculty chair position at the University of British Columbia with $1 million over five years. The chair will perform research and teach in emerging areas such as hybrid electrical propulsion, shipboard communication and cyber security.

“We are continually investing in the marine and shipbuilding education in Canada, to build a diverse and experienced next-generation workforce, and create a pipeline of home-grown talent,” says MacLeod

In the supplier base are niche specialists who, Cooke notes, “… can get huge boosts when their tech is included in a Canadian-built vessel. [This] can lead to all sorts of international opportunities.”

The NSS work, while dedicated to non-commercial shipbuilding, is also strengthening shipyards for commercial work. “When Port Weller closed, a lot of Canadian flag carriers took their work to U.S. yards,” says Kirkpatrick. “We dry docked three CSL vessels in Port Weller this winter. This was quite a milestone for us. Our goal, especially with the Canadian flagged commercial fleet, is keeping as much of that work in Canada as we can, and the NSS will allow us to build up our resource base.”

Building ships under the NSS is just the beginning, he adds. “Forty per cent of the cost of a ship is the purchase of it. The rest is maintenance over the life of the ship. When you build a professional base, for example, a support network, there is a longevity to it. The ships will be around for 30 to 40 years, and they have to be maintained. Our hope is that a robust commercial, naval and coast guard fleet will keep us busy in perpetuity.”