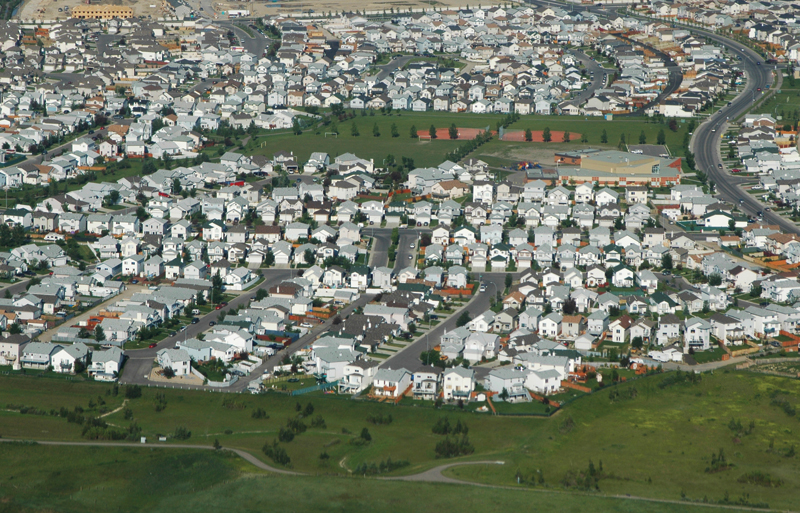 The sprawling, outward expansion of Canadian cities to provide lower-priced houses to growing populations threatens the financial future of many Canadian local authorities and pushes unnecessary costs onto taxpayers. However, innovative municipalities that are addressing the problem may have lessons for the rest of the country, according to a report released this past fall.

The report, Suburban Sprawl: Exposing Hidden Costs, Identifying Innovations by Sustainable Prosperity, a national think tank based at the University of Ottawa, says while many of the costs of suburban sprawl are hidden, they are nevertheless “real and substantial.” Report author David Thompson, policy director of sustainable communities with the think tank, says all Canadians bear the cost of suburban sprawl.

“It’s time to challenge the myth that sprawl is cheaper,” Thompson says. “The full costs and trade-offs are not always obvious, but they are real and may have unintended economic and environmental consequences.”

The report exposes some of the costs of sprawl, which include longer commutes by car, increased automobile emissions, higher risk of road accidents, increased fatigue resulting in reduced productivity, and impaired quality of life and family time. But it says the most significant costs are capital spending, which is higher for low-density developments, and the long-term financial liabilities for municipalities that are often passed on to taxpayers.

For instance, the report points out that in Edmonton, the City picks up all the capital costs of fire and police stations and portions of the cost of some roads and recreation facilities. It covers all the costs of maintenance, repair, and renewal of the infrastructure, including pipes and roads. This means that, across just 17 of more than 40 planned new developments, costs to the City are expected to exceed revenues by nearly $4 billion over the next 60 years. Peel Region in Ontario recently concluded that new development was not paying for itself. The Halifax Regional Municipality calculated that it could save as much as $715 million by 2031 by increasing the number of new dwellings sited in the urban core, and Calgary found that by adopting a denser growth pattern that used 25 per cent less land it could save $11 billion in capital costs alone.

“Some municipalities have calculated the costs of suburban sprawl compared to higher density development closer to city centres, and some are now charging new developments their real costs,” Thompson adds. He says innovative municipalities that are addressing the problem may have lessons for the rest of the country:

• The City of Kitchener, Ontario’s suburban residential development charges are 74 per cent higher than those for central neighbourhoods.

• Ottawa has higher charges for development outside of its greenbelt

• Hamilton provides a 90 per cent exemption from development charges downtown.

• Windsor has a property tax assistance program for redevelopment of abandoned industrial properties.

Thompson also suggests policy measures like higher taxes on land value and lower rates—or no tax—on buildings to encourage redevelopment of parking lots and underutilized land in city centres, special reductions to incentivize urban development, and increased development charges in the suburbs to reflect the actual cost of providing services.

“With another six to 14 million Canadians needing to be housed in the next 24 years, we have an opportunity to be innovative and achieve the urban development goals that many Canadian municipalities have adopted, but not yet been able to fully implement,” he adds.