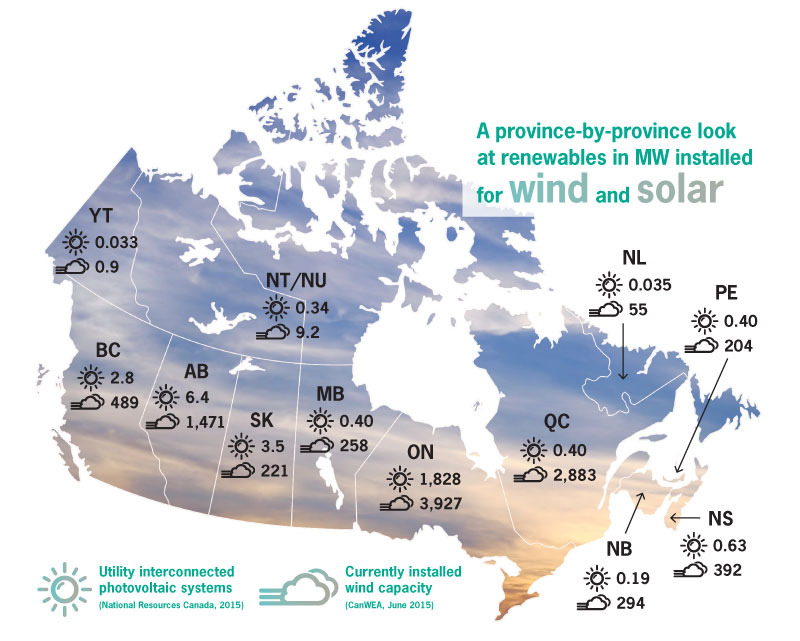 Dozens of solar of companies that responded to the Ontario government bid to inject 140 megawatts (MW) of renewable power into the grid couldn’t have been thrilled when unhappy crowds and local politicians ran many of them out of town. Wind turbines have been challenged almost from the get-go as harmful to bats, birds, and people, not to mention property values. However, when some of these same arguments reappeared this summer in response to the proposed solar farms, it highlighted the challenges solar and wind power producers face as they strive to increase their market share.

As of June 2015, wind accounted for 10,204 MW of electricity production in Canada. According to the Canadian Wind Energy Association (CanWEA), Ontario leads the way with 3,927 MW of built capacity, followed by Quebec with 2,883 MW, with all other provinces and territories trailing. Deployment of solar systems is further behind, at 1,843 MW nationally, with most in Ontario, according to the Canadian Solar Industries Association (CanSIA). The renewable numbers are meagre when compared with the total electrical-generating capacity in Canada—estimates for wind vary from four to six per cent, depending on who you ask, and a mere fraction of one per cent for solar.

While the numbers underscore the reality that wind and solar are in their infancy, the associations representing the two sectors in Canada express optimism. CanWEA president Robert Hornung said every province and territory in Canada, save Nunavut, contributes some wind to the grid. “We’ve seen very rapid growth,” he said. “Over the last five years, Canada has averaged about 1,200 MW of new installed capacity per year, and last year was a record year with 1,871 MW installed. Canada now has the seventh largest wind fleet in the world in terms of installed capacity.” Furthermore, he said more wind energy has been installed in Canada over the last five years than any other form of electricity generation. “What was clearly a marginal energy source 10 years ago has now truly moved into the mainstream and in many ways become a power generation source of choice for governments and utilities across the country.”

CanSIA president and CEO John Gorman is equally bullish. “Solar is about to explode across this country,” he said, even while acknowledging that the only significant solar activity has been in Ontario and that this has largely followed passage of the province’s Green Energy Act in 2009, which kick-started activity with feed-in-tariff incentives. Gorman said costs are decreasing, interest is increasing, and the prospects look good even as incentives wind down. New Brunswick, for instance, is adding more than 80 MW of renewable electricity to its mix, Alberta’s new NDP government is expected to replace coal with renewables, and Saskatchewan is actively exploring the potential of utility-scale solar. “It’s exciting times for our industry,” Gorman said. “We’re at a real turning point.”

Céline Bak, president of Analytica Advisors in Ottawa, said the economics of renewables look promising and pegs the global market for clean-tech equipment at $970 billion for 2013. This includes technologies addressing energy efficiency, industry emissions, water conservation, and other low-carbon objectives, and rings in at about $600 billion less than the automotive sector, growing at about eight per cent annually. Still, Bak cautioned, Canada’s share of the global market share has shrunk from 2.5 per cent in 2005 to 1.3 per cent in 2013, with $11 billion and $12 billion export figures, respectively. “We lost more market share in terms of exports of environmental goods over that eight-year period than every country in the world but two,” she said. “We’re third-biggest loser in terms of global market share of exports of that type of equipment.”

Bak attributed this slowdown to the lack of an integrated national strategy for a low-carbon economy and, by extension, renewable energy. She sees a tie-in between the deployment of wind and solar systems domestically and efforts to stimulate economic activity in the sector through research and development, manufacturing, and international trade. “You can’t have an economy that’s highly dependent on oil and gas and have low industrial capacity for environmental goods knowing that there’s going to be carbon constraints and that the growth is going to be in manufacturing low-carbon, environmental goods,” she said.

“We innovate and create new solutions, and Canada has one of the top solar companies in the world, but that’s because of some very leading research and development that occurred many years ago that was sponsored and tested by Natural Resources Canada,” she said. “We also have some of the world-leading technology for wind and actually had a position of some importance in terms of manufacturing high-value-added components.”

Renewables face another challenge—frequent, stiff opposition. Wind farms have long been accused of intermittency, bird and bat deaths, low-frequency hums, loss of agricultural land, and a detrimental impact on property values. When some of these same concerns arose across Ontario in the wake of a provincial government call for proposals to supply 140 MW of solar power to the provincial grid earlier this year, companies were caught off guard. The local Kingston Whig-Standard newspaper reported that hundreds of citizens attended meetings and signed petitions, and local councillors declined to support most of the proposals. Other communities followed suit as individuals and ad hoc community groups scorned proposals to clear-cut wooded areas or locate near waterways, which they warned might potentially be polluted by degraded or damaged panels. In the wake of the opposition, London-Fanshawe minister Teresa Armstrong told the London Free Press that green energy is the way of the future and that people will accept it if they are consulted and have a say in its planning. “That makes it more open for people to participate, instead of dictating where things go,” she said. “Communities have felt they were out of the loop.”

Dustin Mulvaney, an associate professor of environmental studies at San Jose State University, said wind and solar power offer numerous environmental and climate benefits but are met with very real environmental and social challenges, even if these pale is comparison to their non-renewable, carbon-emitting counterparts. “The challenges are entirely manageable” he said, explaining that panels contain cadmium telluride, indium, and other heavy metals and tend to reach the end of their useful life after three or four decades. “Local governments are starting to express concern about what happens when a lot of these things start coming off of rooftops and decommissioned PV farms. It becomes an argument for extended periods of responsibility, making sure there’s plans in place for disposal.”

Thoughtful siting can also alleviate anxiety. “I don’t think cutting down forest is wise if you have opportunities to avoid that,” he said. “And if there’s a lake with an endangered shorebird or something like that, then a solar farm is probably not suitable. There is no shortage of disturbed land in North America, and these lands would be suitable for solar.”

Mulvaney said the same approach makes sense with wind projects. Bird and bat kills can’t be entirely prevented, but proponents can avoid high-traffic migratory corridors and engineer sites to dissuade birds from flying close by or hunting on the properties themselves. “You might space out wind turbines in certain areas,” he added. The upshot, he explained, is planning carefully where solar and wind power are generated and then minimizing the impacts. “We have to switch to renewable sources, but the power density of them is very low,” he pointed out. “On the other hand, we don’t have many other options. It just takes careful planning, coordination, and compromise.”

Certainly, the writing is on the wall. Devin McCarthy, director of generation and environment with the Canadian Electricity Association, said coal-fired plants currently generate 15 per cent of electricity in Canada, and 70 per cent of this supply is slated to go offline by 2030 in continuing efforts to reduce greenhouse-gas emissions. While coal might have continued staying power should carbon capture and storage take hold, he expressed confidence in a low-carbon future for Canada’s electricity grid. He points to hydroelectric power—currently supplying 63 per cent of Canada’s capacity—as a key enabler.

“There’s a significant potential for hydropower development in Canada,” he said, pointing to two new mega-projects currently in works—Site C in British Columbia and Muskrat Falls in Labrador—and to healthy prospects elsewhere. “Canada is a hydro powerhouse,” he said. “Wind and solar may be only four per cent and less than one per cent, respectively, but they’re making inroads and growing. The nice thing about hydro development is that it’s a very good supporting resource for the intermittency of wind and solar power.”