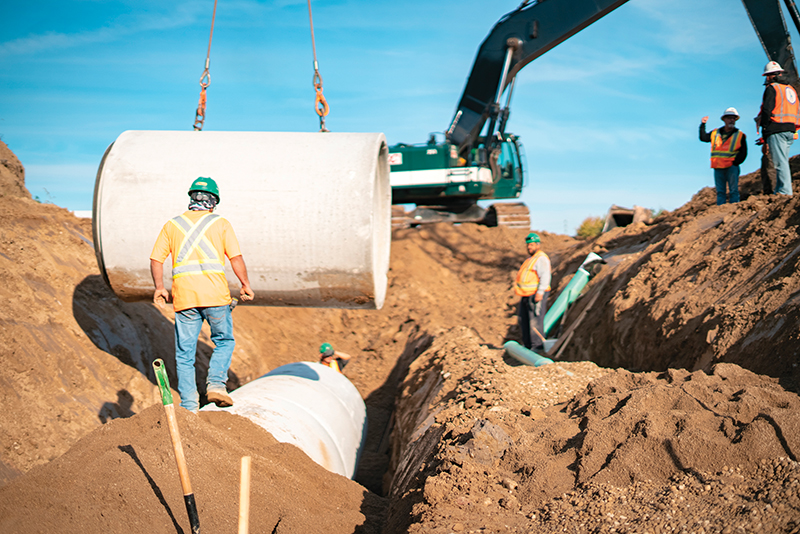 Massive amounts of drinking water are wasted due to leaky pipes.

By Tamer El-Diraby and Nadia Todorova

The extensive underground labyrinth of pipes that routinely bring treated drinking water to our homes and businesses is often out-of-sight and out-of-mind, until a watermain bursts and the taps go dry, that is.

It is much easier, after all, to neglect a hidden network of concealed pipes below-ground as opposed to more visible examples like a deteriorating bridge, potholes in a highway, or downed power lines.

However, it is essential that we keep our critical water and wastewater infrastructure in good repair. If we’ve learned anything from the last two decades, it is that inadequate investments in water infrastructure only lead to deteriorating assets that can result in public health issues and service quality loss.

Investments in water infrastructure asset management and sustained attention to rehabilitation are the cheaper options. The most effective policy is to proactively maintain and upgrade those assets.

When it comes to asset management practices, governments have admittedly made progress over the last two decades.  Yet, there is significantly more work that needs to be done. We still have a long way to go and there is no reason to slow down. In fact, it should be the reason for doubling down.

Our water infrastructure systems are aging and in dire need of repair. Many of the pipes are past their service life. They were installed decades ago and, given that there is no aggressive program to replace them, their breakage rates will only increase—draining more and more of our efforts, money and energy.

As noted in a study (done by co-author Tamer El-Diraby) for the Residential and Civil Construction Alliance of Ontario (RCCAO), we are simply not putting enough funds and efforts towards replacing our critical pipes and watermains. The study, titled “Water Infrastructure in the 21st Century: Smart and Climate-Savvy Asset Management Policies,” examined the extent of the problem.

The study found that many municipalities report a leakage rate of at least 10 per cent. That means that water leakage prevents at least one out of every 10 litres treated in the province from reaching its destination. Reports by some consultants who conducted actual assessments show that rates in Ontario could be as high as nearly 40 per cent. An analysis that was undertaken for the Town of Smiths Falls estimated that rates there between 2003 and 2019 ranged between 41 and 67 per cent.

According to the research, the City of Toronto has consistently reported a leakage rate of 10 to 15 per cent, which means the city is wasting approximately 103 million litres of drinking water per day. That’s the equivalent of filling more than 15,000 Olympic-sized swimming pools every year.

It is difficult to put an exact dollar figure on the money being wasted by treating water that ends up leaking into the ground, as municipalities—especially the smaller ones—do not consistently collect data on leakage.

We can say, however, that based on the amount of water being wasted and the cost of the energy that’s required to treat and then pump the water to its final destination, the amount is substantial.

A lot of energy goes into pushing treated water through pipes. With leakages, municipalities must increase water pressure to prevent infiltration. More carbon emissions result from producing that energy.

Equally concerning, is the age of the pipes. A 2018 survey of 308 water utilities in North America showed that the typical age of a failing watermain is 50 years, and that about 28 per cent of all watermains have an age of 50 years or older. In Toronto, 13 per cent of the watermains are 80 to 100 years of age, and 11 per cent are more than 100 years old, so they are in need of replacement.

A survey in 2018 found that Chatham-Kent had the highest portion of its water infrastructure in poor condition. In Windsor, 27 per cent of the asset portfolio remained operational beyond its useful life.

The results of the study indicated that Ontario should stay the course to preserve the value of its water infrastructure assets and embrace new asset management practices to make the infrastructure more resilient.

We must pivot our plans to face the more complex challenges of the 21st century. If we let our guard down, the repercussions will be much higher than the simple issue of crumbling assets and lower levels of services.

Lack of funding seems to be a chronic problem when it comes to fixing water infrastructure. However, we must embrace a significant paradigm shift in the funding and business models for municipal utilities.

For starters, perhaps governments may consider moving parts of disaster recovery into disaster mitigation funds, and instead look at broadening funding for asset management programs that focus on climate action and innovation. We should also allocate stable funding to support an extended asset-energy-carbon analysis that will define the return-on-investment beyond the financial aspects of asset management projects. Funds, meanwhile, could be provided to municipalities to adopt best practices, lead innovation, and develop plans for investment and performance optimization.

Fixing leakage in a single section of the water system in York Region, for example, saved 139,000 cubic metres a year in water and $426,000 annually in cost as well as enough energy to power 11 homes for a year.

In Collingwood, finding and repairing leaks reduced water loss by 30 cubic metres an hour, a reduction of about 262,000 cubic metres a year. The City of Guelph was able to save 3.7 million cubic metres of water and more than $300,000 in electricity costs to treat and pump water between 2006 and 2014 using an international water audit by the American Water Works Association.

It is incredibly inefficient and singlehandedly defeating our water conservation goals when treated drinking water never makes it to our taps. While there has been progress on the issue, governments must ensure that water infrastructure management and addressing leakage remain a priority.

Tamer E. El-Diraby is a professor in the department of civil and mineral engineering at the University of Toronto.

Nadia Todorova is executive director of the Residential and Civil Construction Alliance of Ontario.

Featured image: Our water infrastructure systems are aging and in dire need of repair, with many of the pipes past their service life.

The Era of Innovative Financing