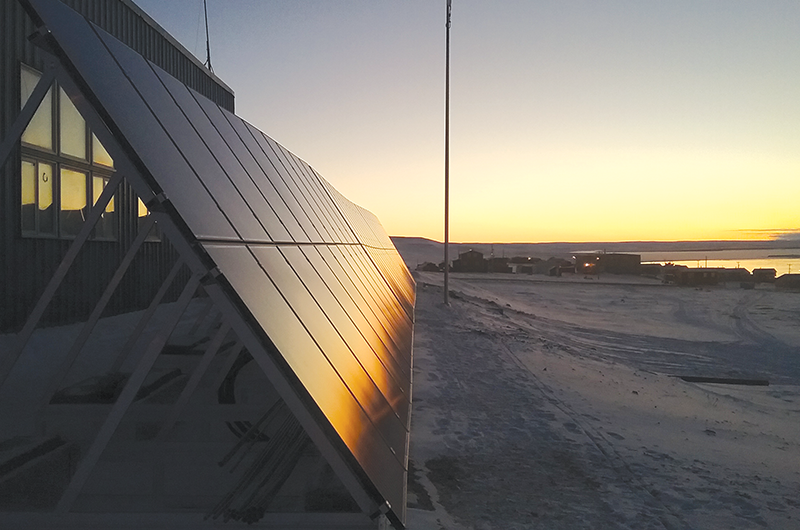 There are approximately 170 remote Indigenous communities in Canada, found in nearly every province and territory (except Prince Edward Island, New Brunswick, and Nova Scotia), with a combined population of over 100,000 people. Remote communities are overwhelmingly reliant on diesel fuel for heating and electricity generation—70 per cent are powered by diesel generators, a polluting fuel that has to be transported into the community at a high cost.

While some communities are accessible by permanent road, many are only accessible by plane, boat, or winter road. Collectively, remote communities in Canada consume more than 90 million litres of diesel fuel every year for electricity generation, and around the same amount for heating. In addition to environmental issues, burning diesel for heat and power also creates local health issues. Because of this and other factors, many Indigenous communities have a desire to develop clean energy projects and control more aspects of their energy system. There is tangible momentum across remote Indigenous communities in Canada shifting away from diesel reliance and toward clean and sustainable sources of energy, with dozens of projects in operation or development. The motivations for this shift include the high cost of energy, reducing environmental and health impacts, pursuing new economic development opportunities, and advancing self-determination. However, along with the opportunities it brings, making this transition is not without its challenges.

The high cost of diesel reliance

With fuel deliveries being critical and infrequent, an interruption in supply could be catastrophic for many communities. Energy security in remote areas is becoming more and more threatened as climate change shortens the season for the ice roads that many communities depend on. Reliable access to essential services like heat, light, refrigeration, and communication may become more tenuous as a result.

Relying on diesel fuel is also expensive, especially in remote communities where everything already costs more, from housing and travel to food and services. The average home in a representative northern Ontario community consumes the equivalent of 40 barrels (each containing 159 litres) of diesel each year for heat and electricity. This translates to an energy bill of over $3,000 per year—more than twice that of the average Canadian household. Some communities in the Yukon pay even more, with household energy bills averaging $4,500 per year.

Since remote communities are not connected to the North American electricity grid, they make use of their own small-scale microgrids. A microgrid encompasses the whole system that provides electricity to the community; this includes diesel generators, distribution wires, and control systems, plus any sources of renewable energy, such as wind, solar photovoltaic, biomass-fuelled combined heat and power, and small-scale hydro. There are many successful examples of renewable energy sources, energy storage, and control systems being integrated with diesel generators in remote communities to create hybrid microgrids.

Hybrid systems can include innovative technologies like variable speed diesel generators, which can pair with renewable energy sources more efficiently, and battery storage systems, which allow renewable energy to be stored for use when it is needed. The list of innovative projects incorporating these technologies continues to grow, demonstrating that reduced operating costs, carbon pollution, and reliance on imported diesel fuel are all possible.

In most remote communities, diesel microgrids are owned and operated by a regulated utility. When independent power producers (IPPs)—which increasingly are community-led ventures, build and own renewable energy projects, the utility is still responsible for managing the overall safety and reliability of the microgrid. However, in the traditional model of structuring electricity rates, the utility is not able to make a financial return in exchange for holding this responsibility. Rather, the utility’s profit is determined based exclusively on the value of the assets it owns, meaning that there is no natural incentive for the utility to sell less power or give up control of its infrastructure.

Integrating renewable energy from IPPs can be an effective way for utilities to acquire additional electricity or decarbonize their current system without needing to raise large amounts of capital to build projects. However, incorporating renewable energy increases the complexity of operating a microgrid—a risk and responsibility carried by the utility. The size and number of projects that IPPs and communities are able to pursue are limited, as the utility typically sets limits on the amount of renewable energy it believes it can integrate while still meeting reliability requirements and keeping electricity rates the same.

The need to decarbonize electricity grids worldwide and the emerging and clear benefits of distributed, renewable energy are challenging this approach. While the goals of providing safe, reliable, and affordable electricity have not changed, a more modern and innovative energy system is evolving that incorporates new values of energy security, local self-reliance, and energy democracy, as well as meeting environmental performance and decarbonization goals. The system that is emerging favours a transition to distributed energy production and demand management, which is not well matched to the traditional utility business model and regulatory compact. The old way of providing electricity is sunsetting.

The future of energy in remote communities

In many cases, communities are advancing their energy objectives despite the uneven policy approach of many governments and utilities. Such policies often maintain control over decision-making affecting Indigenous communities, and offer inadequate opportunities for Indigenous engagement and participation. Communities such as these might eventually take on the role of the utility, completely decolonizing how their energy has been provided to them for decades. For remote Indigenous communities, this has the potential to be a powerful step towards advancing energy sovereignty. Leading jurisdictions such as B.C. are already directing their regulators to explore this option, making energy independence a realistic option for the future. Changing the regulation of utilities so their business is not eroded when communities acquire their own generation assets would help bring them on board as partners in this transition.

Along with new technologies, regulatory and business model reforms have the potential to accelerate the clean energy transition for remote communities. Governments, regulators, and utilities across Canada need to respond to Indigenous-led momentum, shifting and advancing policies and practices in order to enable fair and equitable access to diesel reduction opportunities and the accompanying economic, social, health, and community benefits. Navigating the changes that need to take place will require meaningful dialogue, transparency, and visionary thinking between governments, utilities, and communities, driven by Indigenous leadership and a desire for communities to be in control of their  own energy future.

Dylan Heerema is a senior analyst and researcher at the Pembina Institute.

Featured image: Solar power in Sachs Harbour, located in the Inuvik Region of the Northwest Territories.