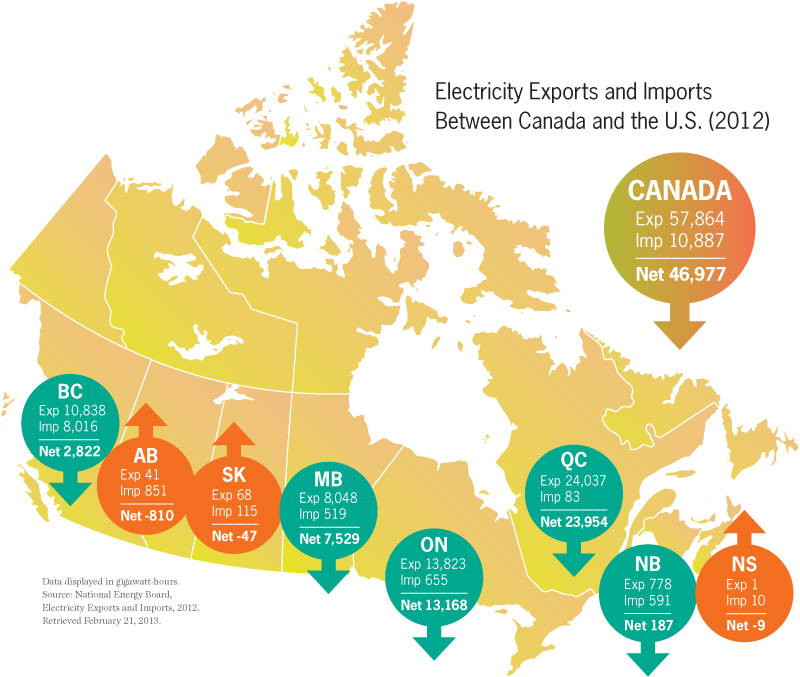 Electricity plays an integral role in the Canada-U.S. relationship on energy, which is a fundamental pillar of the broader flow of two-way trade that is unmatched anywhere in the world. The linkages between the Canadian and U.S. grids—more than three dozen in total—offer several advantages to both countries, such as higher reliability and expanded access to low-emitting resources. These physical interconnections have facilitated steady growth in what has become a continent-wide marketplace for electricity.

When it comes to the buying and selling of energy commodities, our countries have long acted as each other’s best customer. For example, the U.S. Energy Information Administration reports Canada receives the greatest share of U.S. natural gas exports (with volumes nearly tripling between 2006 and 2012), and the Embassy of Canada in Washington reports Canada provides the United States with more crude oil and petroleum products, coal, uranium, and natural gas than any other foreign source. Canada is the largest supplier to the United States of another vital commodity: electricity. The integration of electricity markets in Canada and the United States means supply can fulfill demand in an efficient, cost-effective manner across the continent.

Like anything man-made, the grid requires its fair share of maintenance and servicing. In recent years, however, utilities have not always been granted the ability to invest in electric infrastructure in a manner that has kept up with population and demand growth, the proliferation of cyber and physical security threats, advances in technology, or the evolving expectations of consumers.

In Canada, more than $350 billion is needed to refurbish, renew, and replace aging electrical assets over the next 20 years, according to a 2012 study by the Conference Board of Canada. This translates into an average annual investment requirement of $15 billion—the highest in the country’s history. This challenge is by no means unique to Canada. In the United States, the electricity sector is also confronting a daunting task to fund record levels of capital expenditures. The U.S.-based Edison Electric Institute reports that investor-owned utilities alone are projecting annual investment needs in the unprecedented range of US$85 billion through 2014.

At this juncture in our bilateral partnership, we must be recognize that a modernized electricity system is essential to enabling North Americans to continue enjoying their existing quality of life—and that greater investment is required to cross the threshold leading to economic renewal and North American energy independence.

The role of governments

Governments at all levels in the United States and Canada have crucial roles to play. For starters, government should assist industry’s efforts to improve public understanding of the pressing need for new investments. Concerns surrounding the expansion of the electricity system—the costs to be incurred, who will pay, and the potential impact on health and safety—are entirely legitimate, and both industry and government have a responsibility to work together to address these concerns. However, there is also a responsibility to ensure that the public understands the benefits provided by the safe, reliable, and affordable delivery of electricity.

Moreover, it is incumbent upon policymakers to ensure the development of a 21st-century power grid is governed by a 21st-century regulatory regime. Duplicative, complex, and administratively burdensome regulation has historically served as one of the primary barriers to enabling required investments. It is important the federal governments in both Canada and the United States enact meaningful reforms and relevant authorities sustain efforts to foster a strong regulatory framework—based on appropriate public consultation—that effectively strikes a balance between providing rigorous oversight and supporting much-needed investment actions.

Opening the door to new infrastructure investments will generate significant economic growth and employment opportunities along the way. According to a 2012 study conducted by the Conference Board of Canada, for every $100 million invested in power system assets, real GDP is boosted by $85.6 million and approximately 1,200 jobs are created. At a time when challenges to economic recovery persist, the job-creation proposition presented by infrastructure investment activity is too compelling to ignore.

Alongside the exploration of new tools and approaches to maximize the environmental performance of the international power grid, it is important to continue supporting the creative, effective means for achieving emission reductions that are already in place or under development.

One such example is the cross-border fungibility of environmental compliance instruments, where emission reductions in one jurisdiction are advantageous to neighbouring jurisdictions. Innovative real-life examples in this regard include the wind farm in Alberta whose renewable energy credits are purchased by a California-based utility to fulfill its environmental obligations in that state, as well as Ontario’s inclusion in its emissions trading program of nitrogen oxides and sulphur dioxide reductions in nearby states.

Another compelling example is the marriage of wind and water that occurs in many regions across the continent. Often the storage capability of hydropower capacity in Canadian provinces can be used to firm-up the development of wind and other intermittent renewables in adjacent  states. The recent establishment of a long-term power purchase agreement between Manitoba Hydro and Minnesota Power for this exact purpose is an excellent example of how grid integration provides opportunities for achieving a cleaner emissions profile than would otherwise be possible.

Canada has typically exported upwards of 10 per cent of its electricity production to the United States. While imports into Canada have varied over time, these sales nevertheless play a key role in meeting the needs of Canadian customers and maintaining operational balance in the interconnected system.

In short, the market is a borderless one. Supply meets demand north-to-south or south-to-north as conditions require. Governments in Canada and the United States must remain vigilant to avoid erecting any barriers that may inhibit inter-jurisdictional power flows. Such barriers include restrictive renewable electricity production or purchase obligations, at either the provincial, state, or national level. Renewable or clean energy standard (CES) targets, for example, have emerged as a popular policy option through which governments seek to lower the emissions profile of electricity facilities under their jurisdiction.

However, these standards are sometimes configured to exclude non-emitting resources, such as large hydroelectric facilities or nuclear plants, or otherwise eligible energy sources from non-adjacent control areas from their definition of qualifying generation. This, in turn, can adversely impact electricity trade, as it might weaken the option of purchasing clean electricity from another jurisdiction. Such restrictive arrangements are neither conducive to cutting emissions, nor to reducing electric rates and thereby stimulating economic growth.

As U.S. lawmakers seek to adopt new policies—ranging from CES standards to reverse auction mechanisms—to stimulate development of clean and alternative energy, ensuring that these tools are inclusive of all North American clean electricity sources and are adapted to competitive market designs (where appropriate) will be critical to assuring a fulsome transition towards a clean energy economy.

A vibrant electricity trading relationship has served as an enduring feature of the North American economy. Enhancing this relationship will play a central part in realizing the potential for renewed economic vitality and a more secure, independent energy future.

Patrick Brown is the director of U.S. affairs with the Canadian Electricity Association.

The Arizona-based Distributed Wind Energy Association (DWEA) has entered into a partnership with the Canadian Wind Energy Association (CanWEA) in an effort to strengthen representation of the small wind energy industry in Canada. The two organizations believe they can build on the modest groundwork that the small wind industry has built in Canada.

Small wind is the use of relatively smaller turbines by homes, farms, businesses, and public facilities to offset the price of their existing energy costs.

“Canada is rapidly falling behind other countries in deploying small wind energy systems that can provide clean and renewable electricity for homeowners, businesses and remote communities,” CanWEA president Robert Hornung says. “This CanWEA/DWEA partnership will bring a strong and united voice to advocacy efforts to create a stable and sustainable policy framework that can facilitate the rapid deployment of small wind energy systems in Canada.”