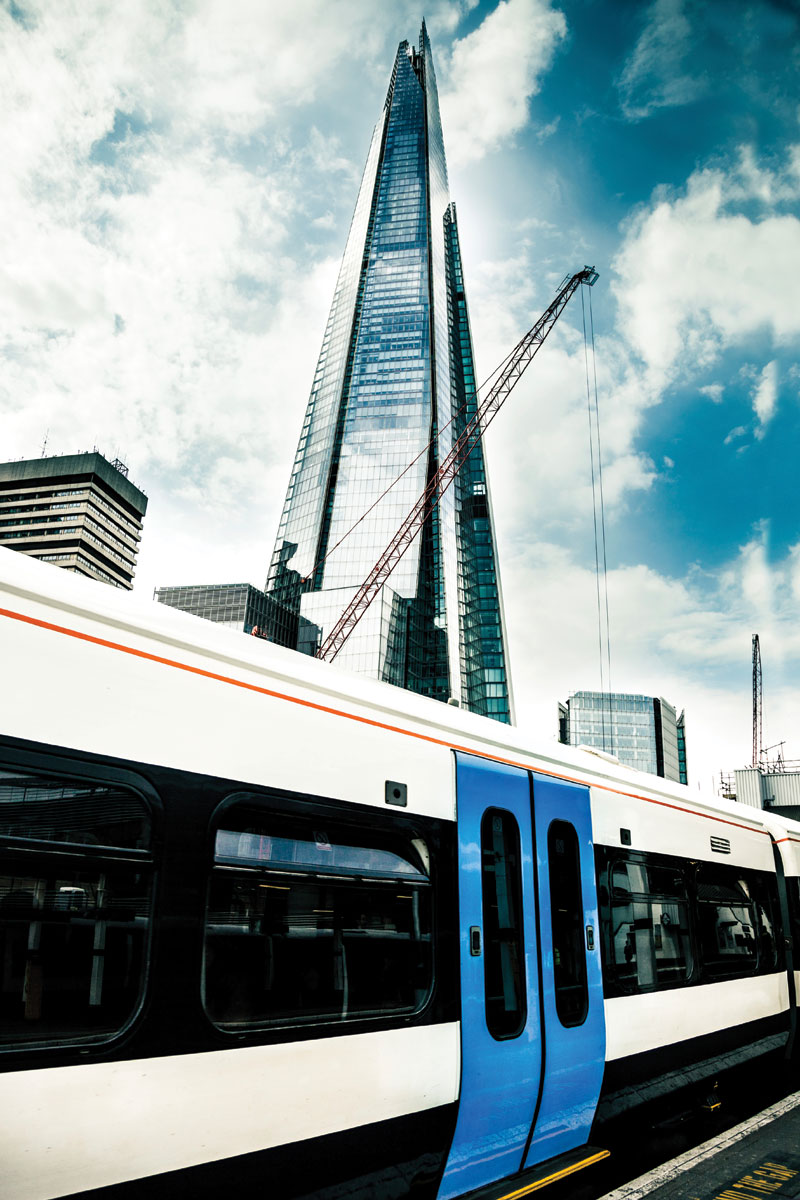 Wrap-around screens show dramatic photographs of England’s capital city, entertaining us as we file into the high-speed elevator of the Shard, London’s newest, most outrageous mixed-use tower. We have paid a Queen’s ransom for the privilege of accessing the Shard’s observation platform, stretching from floors 68 to 72, built over the London Bridge rail hub—an ultra-modern reconstruction of the city’s first rail terminus dating from the 1840s.

The view from the Shard proves to be worth every penny. Laid out below us is some of the priciest real estate in the world, dotted with historic icons like Big Ben and Tower Bridge. The landscape is also interspersed with newer creations like Canary Wharf, a former brownfield site that now supports 20 million square feet of office space, almost one million square feet of retail space, and a growing market for housing.

What lies beneath
For infrastructure nerds, a more fascinating story is what lies beneath. According to the United Kingdom’s Institute for Public Policy Research, as reported by the Financial Times, the Guardian, and The Spectator, infrastructure renewal in London represents a multi-year reinvestment value well in excess of $50 billion.

Projects vary widely in scale and function, but all depend on a pact between strong-willed local politicians, led by Mayor Boris Johnston and England’s federal government. The simple fact is that London—with the willing support of parliament—is compelled to reinvest in capital improvements as an essential investment in the country’s economic future. Protecting a legacy of essential infrastructure that dates back to Victorian times—when the primary means of transport was the River Thames—is seen as an investment, not an expense.

Take Crossrail. By 2018, this 22-kilometre, $35-billion, multi-year investment in high-speed transit will have connected far-flung suburbs to the burgeoning employment centre of Canary Wharf and other locations along its route. The promise of dramatically reduced commuting time for office workers not only opens up access to more affordable housing, but significantly expands the pool of potential employees. This fact is not lost on major employers along the Crossrail corridor, who have collectively agreed to contribute value-added fees to its implementation, much like members of a business improvement area.

Commuting improvements are not solely allocated to major projects, however. Some $16 billion have been allocated to renewing the century-old underground system (half of which is actually above ground), known affectionately as the Tube. These investments ensure that the system’s one billion annual riders have less to complain about as the improvements take effect.

The Oyster metro card system not only helps move people through the network efficiently, with helpful staff on hand to educate first-time users, but expands the utility of the system by integrating what used to be independent, non-transferable fare structures. Oyster also provides Transport for London (TFL) with priceless data mined to improve the accuracy of forecasts to set spending priorities as well as to provide marketing intelligence for prospective investors. On the strength of understanding the future purchasing power of commuters, 100,000 square feet of pre-leased retail space at Crossrail’s Canary Wharf station is awaiting opening day. Latest reports suggest that a third of that space has already opened—even before the trains are running. The station was built by the private sector as part of its commitment to Crossrail, designed to create attractive public space in addition to fulfilling its role as a transit hub.

TFL is also overseeing structural reinforcement of the 80-year-old Chiswick Bridge, one of 20 bridges spanning the Thames. This complex project was completed this summer as part of an $8-billion commitment to road improvements. TFL estimates that 26 million journeys begin in London every working day. The restoration is an excellent example of how to do more than just make a bridge safe. Designers added a segregated walkway and cycleway while staying faithful to the classic 1930s style. With a nod to Chiswick Bridge’s role as the finishing line for the Oxford and Cambridge University Boat Race, they also found room in the budget to provide better accommodation for amateur rowing clubs to stow their gear.

One of London’s first major non-transportation infrastructure investments in the 1840s was construction of storm and sanitary sewers; the benefits that came from channeling sewage into 20,000 miles of pipes rather than the River Thames included improved health and making the city’s air fit to breathe. The Thames Embankment illustrates how Victorian designers were able to leverage a basic infrastructure project into classic public realm.

One hundred and seventy five years later, the government has allocated approximately $1 billion to upgrade the city’s central sewers, with the prospect of an additional $8 billion proposed—but not yet approved—to construct a “super sewer tunnel” as part of the Thames Tideway Scheme—London’s response to flooding and climate change.

Does London get more than its share?
How does London justify the expense? Critics point out that per capita infrastructure spending for London is 24 times the amount allocated to the economically deprived northeast of England. Part of the answer lies in the need to protect the vitality of the country’s economic engine.

The amounts may be staggering by Canadian standards, but this does not mean funds are allocated freely. For larger projects—like Crossrail—the process for establishing the business case is lengthy and arduous, requiring sign off from Her Majesty’s Treasury as well as demonstrated financial commitment from the private sector.

The need to keep London moving is seen as a priority for politicians working at all levels. With strong support from the mayor, infrastructure renewal projects are viewed as an opportunity to set new standards rather than just play catch up:

See also  Islands of Good in the GTA

Not everything goes smoothly, of course. London’s diesel-hybrid Routemaster double-decker buses are currently suffering high-profile battery failure. The privately held franchises overseen by Network Rail that use London as a hub are facing huge fines for failing to meet contracted standards for on-time service. But innovation requires bold action, which is the hallmark of infrastructure renewal in London.

Here at home
London is the “most visited city in the world,” and according to MasterCard researchers, the city expects an estimated 19 million overnight stays in 2015 (a third more than its nearest rival, Paris). Alternatively, The Economist recently named Toronto the world’s most livable city.

How does being the most visited compare with being the most livable? Recognizing that decisions on where to live are highly individual, The Economist’s methodology for selecting champions of livability rates Toronto No. 1 because of high scores in safety, cost of living, food security, quality of the business environment, and perceptions regarding democracy. The index does not explicitly address an ability to maintain essential infrastructure.

An interesting focus of the MasterCard rating of “most visited” cities is that the latter index places a high value on the role played by a city’s international airport and the ease with which travellers can access the downtown. Both of London’s major airports have direct rail access, with Heathrow offering both premium express and slower but less costly access via the Tube. Now that Toronto has the Union-Pearson Express, combined with the more arduous but cheaper option offered by the TTC, perhaps this will shift the rating dial to Toronto’s benefit?

Which rating matters most? The challenge for decision makers is that putting comparisons aside, the environment that guides or attracts investment is unique to every city. The United Kingdom’s economy is heavily dependent on its thriving capital city. Perhaps the Toronto region’s real challenge is to develop assets that will compel future generations to maintain conditions that support an “investable city.”

Glenn Miller is a director of the Canadian Urban Institute (CUI) and a regular contributor to this magazine. The CUI and ReNew Canada are jointly hosting the second Canadian Urban Forum in Toronto on October 8.