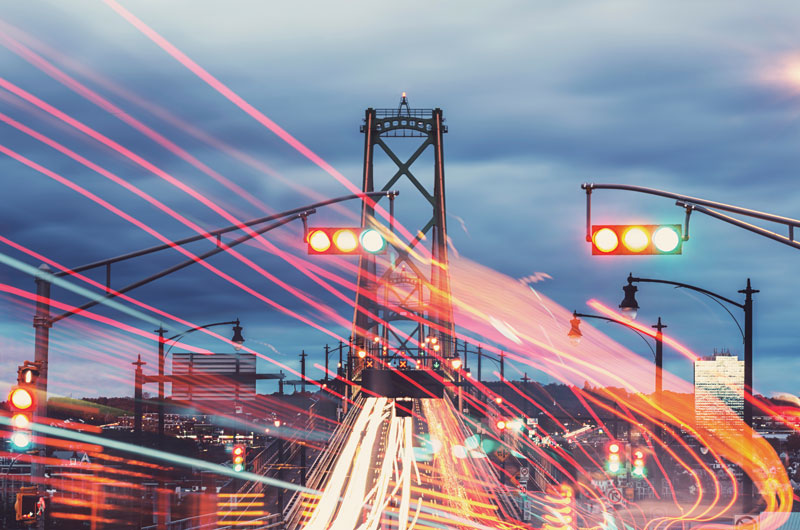 The impact of autonomous vehicles (AVs) on Canada’s infrastructure will be significant. The best proxy for this is to look back to the early years of the 20th century. When the first cars were introduced, sales volumes were large and the impact on infrastructure was huge. Roads, traffic management systems, parking, and gas stations were all built to accommodate the adoption of the new technology. We can safely predict that the change to AVs will lead to changes of a similar order of magnitude.

Standard transportation infrastructure
Although AVs are being designed to travel on existing roads without requiring modifications to the infrastructure, there are numerous ways they will have an impact.

Road utilization will increase because computers will be far more situationally aware than human drivers and have much faster reaction times. This means that, where laws allow, AVs will be able to safely travel closer together, thereby increasing the capacity of existing roads as measured in vehicles per hour. When we incorporate the convergence of AVs and connected vehicles, the trend will accelerate because the headway between vehicles can be further reduced. The overall benefit is a reduction in the need to expand existing roads and highways.

Some roads may also be subdivided into AV and non-AV lanes simply by restriping them. Alternatively, we can determine parallel routes as AV and non-AV vehicles—so that there are low-cost conversion options available to highway operators.

Modelling studies conducted in the United States show that roundabouts are more efficient for AVs than traffic signals. This is because computers are better at managing the merging process. As the population of AVs increases, there will likely be a gradual replacement of signalized intersections with roundabouts.

See also  Islands of Good in the GTA

Similarly, we can predict that some signage to assist human drivers could be phased out and replaced by local transmitters that send data directly to vehicles.

We also encourage agencies to commission more modelling studies to better understand the best practices. For example, at which level of penetration into the fleet should we change the operation of the road (dedicated lanes, roundabouts, et cetera) in order to take advantage of the AV? What are the new operating parameters for AV-based networks? How do we operate with different levels of a mixed fleet? At what point do we decide that specific areas of the province or community switch entirely to AV operation?

An increasing number of urban dwellers and millennials choose to use transit over owning their own vehicles, and this growing trend will continue to accelerate. Another impact on infrastructure is the need for fewer parking lots. The arrival of fully automated taxis means that far fewer people will need to park their vehicles at their destination. For people who own their own AVs, there is also the option to send the vehicle home, where it will park itself. However, the parking lots that remain will need far more charging points. There is a clear synergy between AVs and electric vehicles (EVs), especially for travel within a town or city—which is where most of us travel most of the time.

Cities would require the installation of a large number of charging points, which would impact electricity companies’ power distribution infrastructure.

Similarly, the need for large, expensive transit park-and-ride lots will decrease. People will be able to travel from home to a transit station via AV and then send the AV home, possibly to enable other family members to go to work or school.

It is important to note that in dense travel corridors, the need for existing mass transit will remain because AVs will have a limited impact on existing high-volume transit routes during peak periods. Traditional mass transit is a very efficient way to move a lot of people relatively quickly.

There will be an impact under environmental impact laws and regulations. Under the Canadian Environmental Assessment Act and the relevant provincial and territorial acts, there is a requirement that unnecessary environmental impact be avoided unless justified. Because of the transformational changes that AVs could have, it is becoming increasingly possible that an alternative solution or option to meet defined project needs could involve the promotion of an AV-based solution, as it would involve less environmental impact. Future infrastructure projects requiring environmental impact assessments could therefore face a legal challenge on environmental grounds if they haven’t considered AVs as part of the planning
and design.

A final point related to infrastructure, and looking further ahead: there are quality-of-life and economic benefits to establishing AV-only zones in urban centres. This is an extension of the concept proposed by the mayor of Los Angeles. AV-only zones enable a municipality to accelerate the AV benefits mentioned earlier and provide an opportunity for a city to brand itself as new and different, which should attract people and businesses to that jurisdiction.

First, as mentioned above, it is generally accepted that AVs can travel closer together because sensors and software can react to problems faster than human drivers. This could create many issues in policy and enforcement for a tolling system.

Second, fully automated AVs include the “body out” case—such as cars and trucks that have no one in them. There will also be frequent cases where the occupants are children, disabled people, or inebriated people. The tolling system needs to accommodate these scenarios.

Third, enforcement on the bridge will also change. How will police pull over a vehicle with no one in it, and when they do, what is the procedure for dealing with the vehicle? Similarly, if there are children in the vehicle but no adults, simply towing the vehicle is clearly not an option. These are issues that need to be addressed and that could impact the design of shoulders and/or the adjacent roadway approaches.

In the United States, there is interest in AV-only lanes for cars and trucks. Consideration should be given to whether the new bridge might need to accommodate such lanes in the future and what form they might take.

The trend toward transportation-as-a-service (TaaS), as described above, could include one-seater versions that will be able to use lanes that are significantly narrower than current standards. Or, the vehicles could lane-split or lane-share in the same way motorbikes do. The shorter length of these types of AVs will also change lane utilization forecasts. The tolling system will need to be flexible enough to cope with these lane-use scenarios.

As a result of TaaS and ride sharing, it is predicted that the number of vehicles on the roads will decrease although the vehicle kilometres travelled will likely increase. This alone might be revenue neutral for tolling considerations, but suggests a change in vehicle ownership and use that needs to be researched and better understood.

Future-proofing the bridge deck design, prior to construction, should be considered in order to maximize the capacity and expected service life of the bridge in light of AVs. Automated vehicles can travel more precisely and closely across the width of the lanes and overall roadway, as well as travel more closely to edge barriers and containment structures. Therefore, careful consideration should be given to the geometric needs of mixed-use lanes now compared with AV-only lanes in the future. It is almost certain that one additional lane could be accommodated within the existing conventional deck design, perhaps by 2030. But careful planning could also possibly provide two additional lanes—if the bridge structure has been designed to accommodate these loads.

Finally, if the new bridge is to be procured by the public-private partnership (P3) route, the potential opportunities and risks represented by AVs need to be incorporated into discussions at the earliest opportunity. P3 investors tend to be risk averse and the potential impacts of AVs will likely see them looking to transfer risk away from themselves and onto other parties in the contract—with inevitable project cost implications.

Because major infrastructure projects that are being designed and built now will last for 30 to 50 years or more, we recommend all transportation-related projects, especially major ones, include a detailed AV impact assessment study.

Project clients and sponsors will rightly point out that AVs are an unproven technology, and that no regulations, standards, codes of practice, or guidelines currently exist to assist with how to plan for this technology. It is therefore key that all parties involved in the concept, planning, and design process are educated about AVs and their potential impacts and that work is started as soon as possible to develop the necessary guidance documents.

Paul Godsmark is the chief technology officer and Barrie Kirk is the executive director with the Canadian Automated Vehicles Centre of Excellence. Vijay Gill is the assistant VP with Canadian Pacific Consulting Services. Brian Flemming is a senior fellow at the Van Horne Institute. This is an excerpt from a joint report by the Conference Board of Canada, CAVCOE, and the Van Horne Institute titled Automated Vehicles: The Coming of the Next Disruptive Technology.