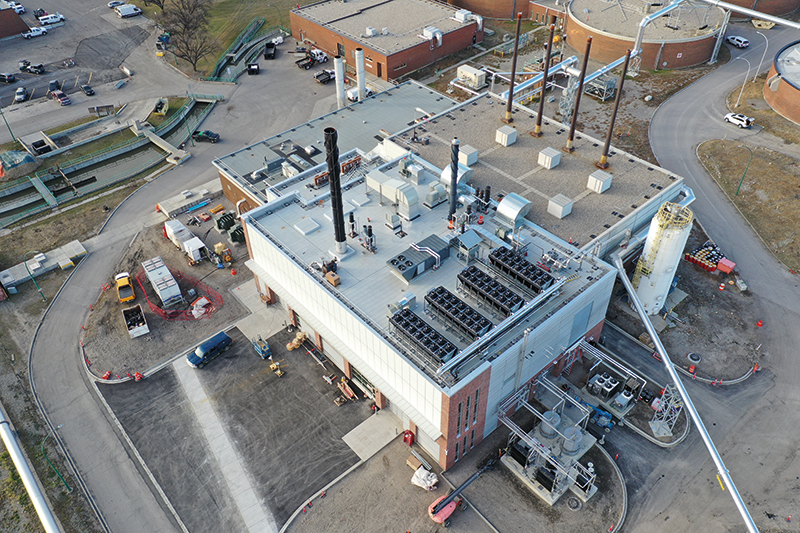 Sewage treatment generates large volumes of gases as solids are broken down by bacterial and physical action. This “biogas”, full of impurities, was historically allowed to vent into the atmosphere, contributing to the malodorous air long associated with wastewater treatment. More modern wastewater facilities capture and safely incinerate or “flare” their biogas. In recent years, some plants began adding portions of their biogas to commercially sourced natural gas and burning the mixture to produce steam or modest amounts of electricity, while still flaring most of their biogas. Calgary’s Bonnybrook Wastewater Treatment Facility is one such site.

Today, Bonnybrook is taking biogas handling to the highest level: using all its biogas as the primary fuel source to meet its needs for electric power and industrial steam for its advanced treatment process. The Bonnybrook Cogeneration Expansion Project was handed over to the City of Calgary in July. It is a first in Canada.

“This project is aligned with our corporate energy plan, which includes conserving energy, improving efficiency and reducing greenhouse gas emissions,” says Jifan Liu, the City of Calgary’s project manager. “It will help in that manner and is the best way for us to do it. Biogas is a by-product of our wastewater treatment process, so we have the biogas. We should harness it to no longer flare and use it to produce energy. Otherwise, it goes to waste.”

Graham, who has delivered numerous other projects at Bonnybrook, was the general contractor and Stantec was the designer and lead consultant on the $60 million, three-year project. The ambitious project was technically complex, a custom design created entirely by Stantec, introduced a new operations concept for the Bonnybrook wastewater team, required vendor-packaged equipment sourced from around the world, and during construction was severely burdened by the effects of the COVID-19 pandemic.

Meeting these challenges and keeping the project moving forward required close cooperation and a goal-oriented focus among the design, construction, and City of Calgary teams. All three parties say that an antagonistic approach by anyone would have derailed the project more than once. Instead, it became a case study in applied cooperation.

“This facility is designed with a certain intent, and it’s going to be run by the client, and so the collaborative approach we took to ensure we had a positive outcome is one that I’ll take forward to future projects,” says Andrew Buchner, Stantec’s B.C. practice lead for water, and resident engineer for the project. “It’s the only way I see to commission a complicated project, especially one that is unique to all of the key parties.”

Although Bonnybrook’s new cogeneration facility is small by power plant standards, its technical complexity is greater than that of a commercial gas-fired electrical generating station with 100 times the output. The power plant provides both combined-cycle power generation and cogeneration of power and heat.

“Cogenerations of power and steam is totally different from wastewater treatment, which is the facility’s core business,” says Liu. “It is technically complicated and there are a lot of components that all need to work together. Our technology goals were significant, and we are using the most advanced gas turbine, steam turbine, and the latest biogas conditioning and water treatment systems.”

The intricacies include the capability to handle an adjustable fuel mix of biogas and commercial natural gas. Because biogas production varies greatly along with wastewater treatment volume, a low-pressure biogas storage bubble was included. Even then, however, some natural gas will be required from time to time. On the other hand, the power plant must also satisfy regulatory requirements that it always operate with at least some biogas; it is not allowed to operate entirely on natural gas.

A Solar Turbines Inc. Centaur 50 Gas Turbine-Driven Generator Set (CTG) gas combustion turbine is coupled to a generator producing 4 MW of power. All waste heat from the CTG is cycled through the Heat Recovery Steam Generator (HRSG) where steam is produced. That steam is then either sent to the Steam Turbine Generator (STG) to create additional power or, will feed the future thermal hydrolysis process (THP) facility—part of Bonnybrook’s Plant D expansion—that will make waste solids more digestible and, in turn, produce even more biogas. The Steam Surface Condenser (S.S.C) condenses all excess steam not used by the STG or THP, and exhaust steam from the STG back into feedwater. A gas-fired steam boiler is included to provide a backup steam source. Incoming or “makeup” water for steam production also requires complex purification. Gas compression and chemical feed systems are further elements.

“This plant has a lot of features, so for an engineer it was extremely interesting,” says Kyle Jensen, Stantec’s electrical and process design engineer. “Using biogas as a fuel is interesting. It only contains about half the energy of commercial natural gas. And it comes with a host of impurities, including highly toxic hydrogen sulfide, or H2 S, which requires careful handling.”

For safety and to avoid damaging the turbine, the process design includes sophisticated gas conditioning, cleaning, and dehydration to remove impurities such as siloxane, housed inside a robust blast-proof gas conditioning room. H2 S, however, remains part of the fuel inlet stream and is safely incinerated during engine combustion.

The complex design, in turn, required sophisticated electrical and control systems, including a motor control system, switchgears and cabling room. The new plant had to be integrated in three different ways: with Bonnybrook’s wastewater treatment system, with its existing reciprocating-engine cogeneration plant, and with the facility’s power system, which draws from Alberta’s electrical grid. “You have three different power sources all producing electricity, that all have to ‘talk’ to each other through the power control system,” notes Cedric McIntosh, Graham’s project manager.

Following several other completed and on-going projects at Bonnybrook—New Headworks Building, Plant B & C Upgrades, Plant D Expansion, and numerous smaller projects—Graham submitted its bid for the Cogeneration Facility and received notice to proceed in July 2019. Construction began that October and the technical complexity immediately made itself felt.

“There was a lot of research and development as we went, there were a lot of changes as we went, and we had to do a lot of work to optimize the schedule to fit the changes and work with the consultant and owner to end up with a product that is useful,” recalls McIntosh. This stemmed from the fact that a lot of key technical information wasn’t initially available to Stantec. “The team solved a lot of problems during the project,” says McIntosh. “It required people recognizing the challenges, where they came from and how we could all work together in good faith to solve each challenge towards a favourable outcome. A lot of that success has to do with the relationship we have with the city and with Stantec.”

The pandemic’s arrival in March 2020 caused immense problems. In addition to the by-now familiar productivity-sapping effects of working under COVID protocols, supply chain issues hit this project particularly hard. Equipment was being sourced from Canada, the U.S., Mexico, Switzerland, India, and other countries. “We had a truly international supply chain, with things coming from all over the world, and certain factories around the world simply shut down in the pandemic, and so there were serious challenges in getting equipment,” says McIntosh. In addition to serious delays in fabricating and shipping the physical items, vendor reviews of shop drawings and vendor site inspections were all delayed, cancelled or had to be moved online.

“The supply chain issues related to COVID were some of the biggest challenges,” agrees Stantec’s Buchner. “The issue-for-tender design was based on certain vendor packages and assumed pieces of equipment, but we did not even get pricing from some of the intended vendors.” Having to switch vendors mid-stream contributed to significant delivery delays on some of the large equipment packages. Equally bad were unforeseen—and continuing—shortages of entirely mundane items. “Off-the-shelf things like 1-inch valves were suddenly requiring 20-week lead times,” Buchner says, further complicating construction and now, the commissioning process.

Stantec and Graham initiated numerous design review and execution meetings, held along with the City of Calgary. “The city recognized that a lot of the challenges weren’t a mark on the people doing the work, but were about the nature of the project,” says McIntosh. A decision that proved highly beneficial was to separate the discussions over cost increases from those related to executing the project and keeping it moving. Liu agrees: “Overall we have very good teams from Stantec and Graham, and they have been very cooperative with the city.”

Creative thinking was applied to re-sequence equipment installation and other key tasks. Under normal sequencing, for example, large equipment packages are placed on-site, and the building envelope is later constructed around them. But when delays on certain packages like the steam turbine generator threatened to halt the entire project, Graham decided to leave a large gap in the building’s second-floor envelope. Once the package finally arrived, it was craned into position, inserted, and placed inside on its skid mounts, after which the building was enclosed.

While delivering the Bonnybrook Cogeneration Expansion Project has been a complicated and difficult process, Liu is excited by what the new facility will deliver. “This project will enable us to consume all of the biogas produced by the plant,” he says. “It will create energy savings for the facility and greatly reduce external consumption of electricity, which will reduce our power bill, and also improve the overall reliability of our power supply.”

George Koch is a researcher and writer based in Calgary who has written extensively about construction and public infrastructure.

Featured image: The City of Calgary’s Bonnybrook Cogeneration Expansion Project takes biogas handling to the highest level: using all its biogas as the primary fuel source to meet its needs for electric power and industrial steam for its advanced treatment process. (Graham Construction)

Combination of construction and restoration for law buildings in Alberta