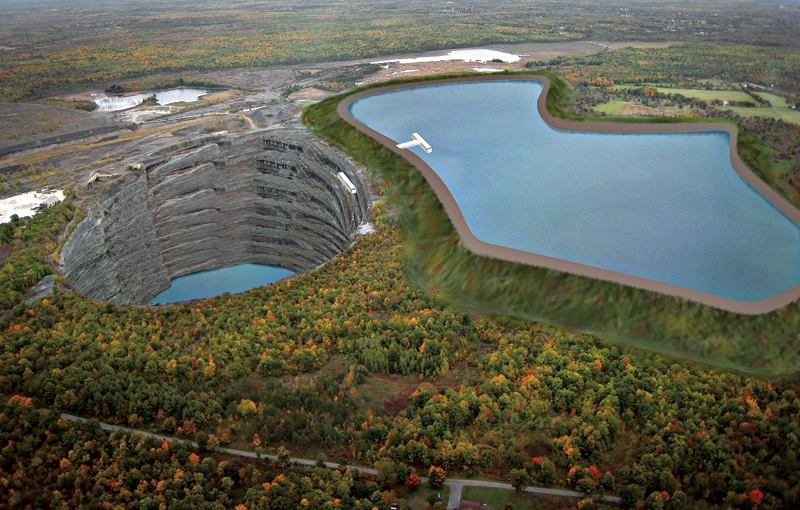 Imagine a dull, overcast day: warm, muggy, and dead calm. On such a day, the tallest wind turbines are idle, and thick stratus clouds block solar arrays. A rather sluggish, unenergetic day, you might think, for renewable power. However, new electricity storage technologies stand to give these energy alternatives a badly needed shot of adrenaline during even the laziest days of summer.

Storage systems, which are in their relative infancy, vary considerably. Small-scale ones are seeing early use in settings like homes and electric vehicles, while other industrial-sized ones are under development or in the early stages of commercialization. Some regulate power on a short-term basis, levelling spikes so the electricity grid runs smoothly; others stash excess energy for the longer term, waiting for a time when demand might exceed availability. By capturing electricity and carefully timing its release, storage systems ranging from battery-sized to cavernous stand to ease the integration of diverse sources of power into a broader, overarching grid.

Temporal Power, a Mississauga, Ontario-based start-up, has its sights on the short term with a flywheel designed to prevent spikes and keep energy systems running smoothly. CEO Cam Carver describes flywheels as mechanical batteries that charge using an electric motor to accelerate a heavy cylindrical mass. This stores kinetic energy, which can then discharge as needed using a generator. “Flywheel systems respond very quickly to power fluctuations and help stabilize the electrical grid,” Carver explains, offering the analogy of a shock absorber. “It balances the difference between supply and demand on a second-to-second basis.”

Following several years of research and development, Temporal Power has landed two early contracts: one for a two-megawatt (MW) system to help the Independent Electricity System Operator (IESO) manage Ontario’s grid, and the other for a five MW system to help stabilize power lines connected to a wind farm near the Lake Erie town of Tillsonburg, Ontario, for Hydro One, the provincial electrical utility. “They’re looking to smooth out fluctuations,” Carver says, adding the Hydro One system—with ten flywheels coupled together—could be operational by year’s end.

Flywheels aren’t the only option for absorbing spikes and preventing short-term power spasms. Another Mississauga company, Electrovaya, is developing a lithium-ion battery system that CEO Sankar Das Gupta says can stabilize short-term loads and also hold power for days or even months. “If you want to store solar energy for 10 hours on a sunny day and then give it out for the next six hours, lithium ion works well,” he explains.

Electrovaya has also landed Hydro One as a customer for a battery that would store one MW of power for a full hour. Das Gupta says he expects the utility will use the system to manage power in populated urban areas, though it would also be perfectly suitable for an industrial-sized wind or solar farm. “It’s an experimental unit, so I suspect they’re going to move it from place to place,” he adds, projecting possible deployment later this year.

Because energy storage technologies are new and its developers are focused on the products themselves, some are partnering for help on the business side. Boston-based General Compression is working through Toronto-based NRStor to develop projects in Canada. CEO Annette Verschuren says her company is interested in the full gamut of storage, from Temporal Power’s spike-easing flywheels to General Compression’s near-isothermal air compression systems designed to store enormous volumes of electricity in cavern-like geologic formations, releasing it to the grid as needed.

“When the wind blows, it can capture that energy, hold onto it, and put it onto the grid when the demand is there,” Verschuren says. This kind of storage has been done on a small scale, and also using natural gas. But General Compression has developed a system that compresses and expands air and, in the process, stores heat in the form of warm water, and the company is looking to build a 1,000 MW facility in Ontario. “Ontario consumes between 11,000 and 25,000 MW at any given time, with an average of 16,000 MW, so storing 1,000 MW is significant,” she says, adding that NRStor is also evaluating markets in Alberta and Nova Scotia.

Yet another technology is pumped storage. It isn’t entirely new, dating back to the mid-1930s in countries like Switzerland, and the United States currently has 20,000 MW worth of it. Pumped storage operates using two reservoirs, one sharply and substantially higher than the other. Surplus electricity is drawn from the grid and used to pump water from the lower chamber to the upper area and then returned by means of gravity and power-generating turbines to the lower chamber, where the electricity is released as needed. “It’s like charging an electric motor at night and using it the next day,” explains John Wright, executive director of business development at Toronto-based Northland Power. “You can either sell your surplus electricity at a discount to other jurisdictions or store it for when you need it.”

Northland Power has its sights set on an old iron mine site near the village of Marmora, Ontario, eight kilometres from a major Toronto-Ottawa hydro corridor. A bonus, Wright says, is that development would mean the de facto rehabilitation of an eyesore: a 40-metre-high pile of leftover waste rock would be fashioned to build the upper reservoir. The system would be able to generate 400 MW for five consecutive hours. “We’ve done a lot of development work in terms of studies to know how much energy it could yield,” he explains. “We looked at Ontario’s surplus energy between 2009 and 2011 and at how much of that energy got shipped to other jurisdictions. Over that two years, we would have been able to absorb a third of it.” He adds that Northland Power is negotiating with the Province to secure a contract with the Ontario Power Authority.

While Northland and others fine-tune the technology and their business prospects, players from the big leagues are showing interest. Enbridge has included wind and solar in its green energy mix and is investing in other renewables, such as geothermal, run-of-river hydro, and heat recovery. Electricity storage is very much on the table, according to David Teichroeb, manager of business development for the company’s alternative and emerging technology unit. “It’s early days, but we see significant promise,” he says.

In February 2013, Temporal Power announced it had garnered $10 million in Series B financing with investments from Enbridge as well as Northwater Capital’s Intellectual Property Fund (a lead investor in the company’s Series A financing round completed in July 2011). David Patterson, CEO of Northwater Capital Management, says Temporal Power’s rate of progress has been remarkable “and the technology clearly marks a new standard for high-performance grid-scale energy storage.” Enbridge got involved because it recognizes the growing need for energy storage in the electricity system, having invested more than $3 billion in wind and solar projects, according to Chuck Szmurlo, the company’s VP of alternative and emerging technology.

Teichroeb sees it as part of a necessary mix: “We don’t see a one-size-fits-all solution. It really will be a mix of technologies and ideas that get us to the point of a much more flexible, efficient, and hopefully economic energy grid.”