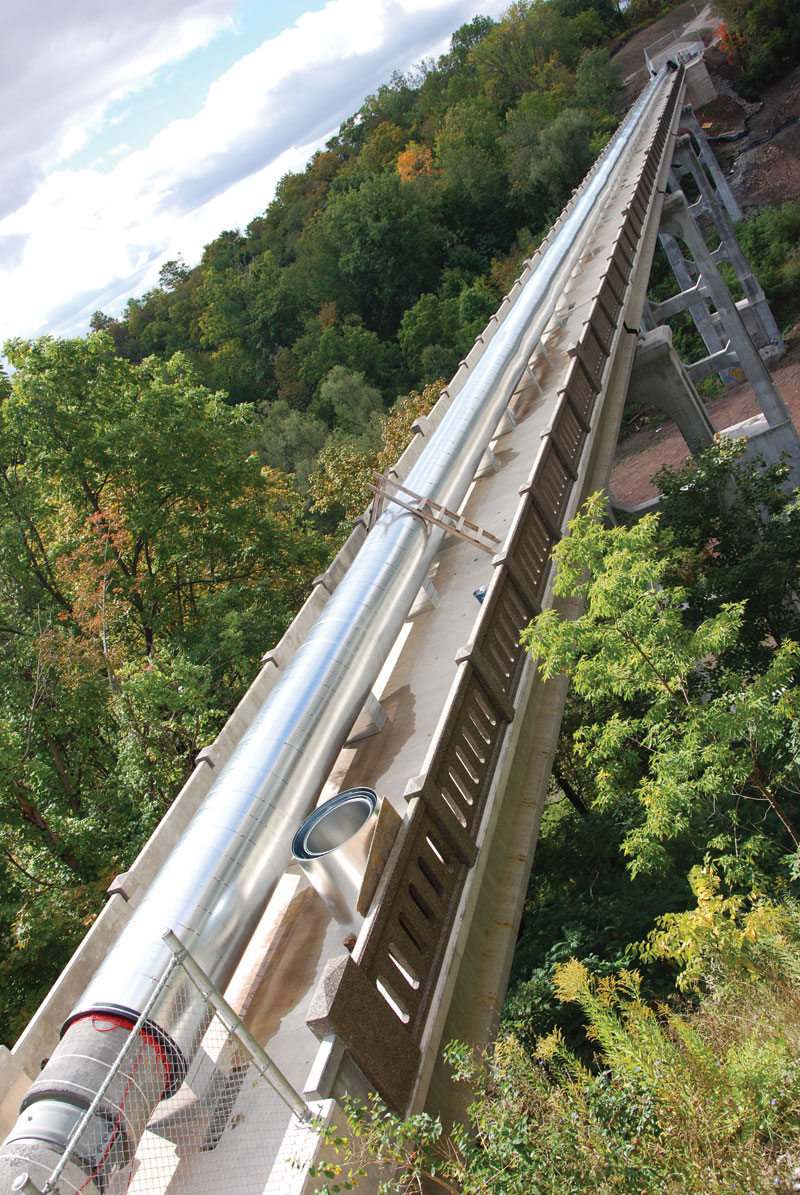 Tansley Bridge was originally built in 1919 and supported a highway crossing Bronte Creek. In 1948, the highway was realigned following the construction of the adjacent highway bridge that services the general public in north Burlington, Ontario to this day. At the same time, the Tansley Bridge was decommissioned and its deck was removed. Four concrete piers, used to support the original structure, were left to stand freely for more than 60 years without a purpose.

In 2008, the South Halton Water and Wastewater Master Plan Update identified several water and wastewater servicing strategies for the projected population and employment in South Halton up to 2021, including numerous capital projects. These projects were to service growth in the approved urban areas of Burlington, Oakville, Milton, and the Halton Hills. In total, the urban population in Halton Region is expected to increase to 548,000 by 2021.

A key consideration in the master plan update was the plan for expansion of the water supply system. It identified the need for two watermains to convey water across Bronte Creek, including one watermain in Zone 1 and another in Zone 3. These two watermains would interconnect the water distribution systems in Burlington and Oakville in order to provide increased conveyance capacity and system security to support growth.

With that, the region retained R.V. Anderson Associates (RVA) to conduct the Schedule C Class Environmental Assessment (EA) study, detailed design, and contract administration of the 900 and 1,200-millimetre-diameter Zone 3 interconnecting watermain, which incorporated the existing concrete piers of the old Tansley Bridge.

Reuse of existing assets
The Class EA study identified three alternatives for constructing the Zone 3 watermain across the Bronte Creek Valley. The first alternative included tunnelling where the tunnel would have to be at least 300 metres long and the shafts would have to be at least 50 metres deep to tunnel from one side of the valley to the other. The issues with this method were the high cost, long construction time, and the large working areas around the tunnel entry and exit shafts, which would have greater impact on the environmentally sensitive valley.

See also  The Legal Side of Green

The second alternative was to support the watermain from the existing Dundas Street Bridge. However, this technique would be difficult due to the complexity of supporting a 900-millimetre-diameter watermain on a bridge superstructure. Maintenance would be complicated and expensive.

The third alternative, which was ultimately the selected preferred option, was to support the watermain via a pipe bridge on the four original piers remaining from the former Tansley Bridge. This method had the least impact on the creek’s environmental features and was found to be less expensive than the alternatives. It could also be implemented more quickly and stayed true to the cultural heritage of the area.

By repurposing the nearly 100-year-old piers, the region saved approximately $3 million in capital costs in comparison to the other alternatives.

Pier rehabilitation
Although the piers survived as firm, rigid structures for almost a century, visual inspections found areas of spalling and cracks consistent with their age and use. Given the environmental constraints associated with accessing the piers from the valley floor, the help of Dartmouth, Nova Scotia-based climbing specialist Remote Access Technology was enlisted to ascend the piers and report on the surface concrete. By using a bow and arrow technique from the valley floor, the field professionals were able to secure lines to climb to the top of each pier—each more than 30 metres tall—and secured to rappel downward.

They collected data from surface condition to rebar confirmation. These investigations were conducted as part of the preliminary engineering phase of this project to confirm the strength and overall condition of the piers.

“Pier patching,” or the cosmetic concrete repairs to the surface of each pier, was conducted by chipping down to sound concrete and installing concrete anchors that were used to tie the reinforcing steel for the placement of concrete. Once the concrete was placed and cured, the forms were removed and the complete surface area of each pier was covered in a cementitious coating to protect from water damage and salt spray from the adjacent highway bridge.

See also  Commentary: Hamilton needs the LRT, so what happens next?

Cultural heritage
Given the rich history of the area, it was important that this project considered the past history of these piers before engaging in the detailed design process. Resource management consultants Unterman McPhail Associates were retained and discovered important details in their search, such as an 1850-era map that showed Dundas Street as a principal communication road with a bridge over what was then called Twelve Mile Creek. They also uncovered that around 1885 a low-level steel truss bridge was built at the base of the valley and was in place until 1916. In that same year, construction for a new bridge structure began in order to improve upon the steep and winding road leading down to the valley floor. This bridge was then completed in 1920.

These were the beginnings of the Tansley Bridge and its four structural piers. This type of historical detail reinforced the uniqueness of this opportunity as a sustainable endeavour for the region.

Thus, the design team deemed it important to incorporate parapet walls with large arch-shaped openings, an intricate cross-beam design, and recessed rectangular facings as homage to the region’s history, giving the piers new meaning and purpose, while enhancing this environmentally sensitive area. By reusing the original piers, there were no adverse impacts, allowing existing and future communities to understand and value the history of their local community.

Environmental impacts
Among the project’s significant challenges was constructing over the Bronte Creek Valley due to the area’s diverse habitat that contains several species at risk; butternut trees, redside dace (a species of fish), and Atlantic salmon are among its inhabitants. The area is also officially designated as an environmentally sensitive area and an Earth Science Area of Natural and Scientific Interest.

Regular communication with approval agencies and stakeholders, such as Ontario Parks, Conservation Halton, and the Ministry of Natural Resources, was pivotal in identifying risks early in the project and streamlining the approval process. These agencies were engaged through the permitting and construction phases to ensure the project would be completed with respect for the terrestrial and aquatic habitats within the sensitive Bronte Creek Valley.

Scaffolding was designed around each pier to contain concrete dust and debris to prevent their release to the natural environment during the pier rehabilitation process. Sediment controls were regularly maintained and reinforced to protect the watercourse. Scheduling took into consideration migratory bird patterns to prevent disruption during the nesting season.

The rehabilitation concept offered considerable savings in terms of a carbon footprint. Newly constructed piers would have required excavation and soil disposal, as well as significant amounts of new material, including concrete and steel. The restoration project remained with the bridge’s existing footprint and involved no excavation in the valley.

In collaboration with Conservation Halton and Ontario Parks, a tree inventory was conducted. The construction plan was developed to minimize vegetation removal. For each tree removed, three trees and five shrubs were planted in its place. The newly planted and landscaped areas blend naturally into the surrounding environment, with carefully selected healthy and vibrant greenery that is sustainable in the specified areas.

Infrastructure renewed
The contractor, Varcon Construction, completed the project in October 2013 at a cost of $9.5 million and the watermain is a part of an integrated water supply system that will help service existing and expanding growth areas within Halton Region.

The Bronte Creek Valley has been rejuvenated with the addition of fresh vegetation and architecture—both old and new. The abandoned piers from the original 1919 bridge have been repurposed into a new piece of water infrastructure that will last for years to come.