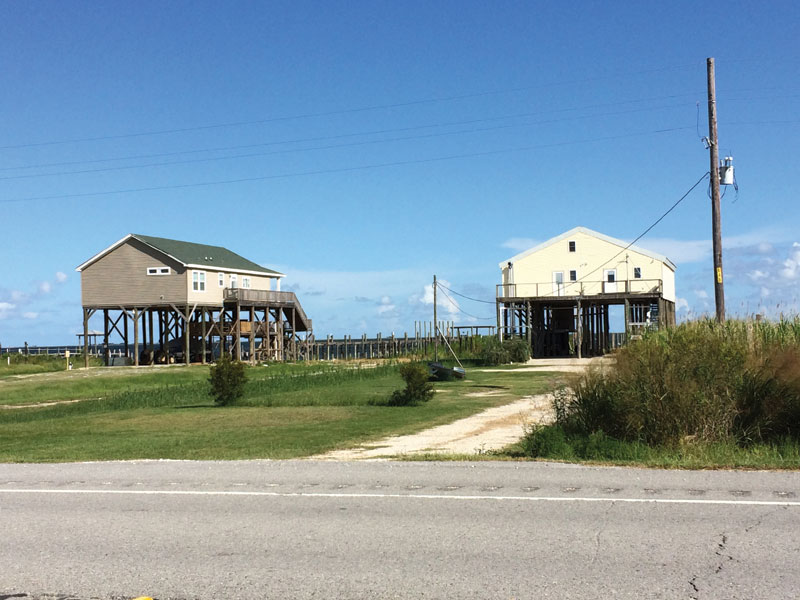 Walking into the Greater First Baptist Church of Escatawpa in southern Mississippi in early September 2014, it seemed as if Hurricane Katrina had delivered its devastating blow just a week or two prior. The stale, musty air, rotted timbers, and eerie darkness lent an almost unbearable freshness to a disaster that, nine years earlier, wrought havoc on the region’s people and infrastructure.

In New Orleans to attend a conference of the Society of Environmental Journalists, I was looking for lessons learned and best practices that might be relevant back in Canada. Politicians told us how their communities had bounced back resiliently following Katrina and the Deepwater Horizon blowout that happened soon afterward. British Petroleum (BP) representatives detailed the company’s clean-up efforts, scientists discussed technical nuances, and grassroots activists reported ongoing impacts the disasters have had on their local infrastructure and peoples’ lives.

On a conference tour to Empire, Louisiana, an hour south of New Orleans, we watched oyster harvester John Tesvich haul in basketfuls filled with rocks and only a few live oysters as he expressed anxiety and hope for the legacy he’ll eventually leave his nephew Luke Cibilich, who was steering the boat and represents the fifth generation of the family business.

Think of the oyster reefs here as underwater farms. Tesvich and his fellow harvesters transplant baby oysters from nearby public reefs—a kind of natural infrastructure—to ones they’ve built using old shells and other natural materials. Since the BP spill, however, oyster populations have greatly diminished. Tesvich, who chairs the Louisiana Oyster Task Force, an industry lobby, said catches are down by one-third since the spill, and he’s worried about the future.

The problem is complex. Immediately after the spill, in order to prevent oil from entering environmentally sensitive estuaries, officials diverted fresh water from a nearby river into salt water areas, decimating oyster populations. This wasn’t the first time large amounts of fresh water have inundated the oyster reefs.

“When I look at what Luke is going to face over the next 30 to 40 years of his career in oysters, I see a lot of uncertainty. We haven’t recovered from BP and yet we have a lot of other things going on.” Indeed, it took considerable time, effort, and cost to rebuild homes, businesses, and infrastructure after Katrina, yet one of the most serious threats to the Gulf comes from fertilizers from U.S. Midwest farms coming down the Mississippi River and creating dead zones in the Gulf that are, as the term implies, literally devoid of life.

While Tesvich said he plans to tough it out, a bus tour of the Ninth Ward back in New Orleans displayed comparable human resilience. Bounded by the Mississippi River and Lake Pontchartrain, the Ninth was particularly ravaged by the utter failure of levees to contain the storm’s immense surge. The levees have since been rebuilt higher and stronger than before, and buildings must now sit at least five feet off the ground to meet new floodplain regulations. However, Katrina’s waters reached 18 feet here, and there’s been debate about the wisdom of rebuilding. Still, Ninth Warders are a hardy lot. It’s an eclectic neighbourhood, home to actors, athletes, and musicians, but the lower Ninth in particular is low income. Habitat for Humanity has worked with architects, performers, benefactors, and other partners to build Musicians Village, a modest parcel of land that includes homes and cultural facilities, with a view to maintaining the city’s vibrant musical tradition and ensuring the community’s most economically vulnerable people can afford to live there. There are even community-run food gardens, complete with an apiary, to ensure access to healthy food.

New Orleans may be the Big Easy, but it’s clear the future will be anything but. Only one-third of the neighbourhood’s 14,000 residents have returned, and the Federal Emergency Management Agency (FEMA) allocated about $100 million to rebuild roads and build new schools, a recreational centre, and a fire hall. However, most of these projects have not yet been completed and many streets here and in adjacent neighbourhoods are nearly impassable due to potholes and bumps. “You build the infrastructure and people come back, but if you don’t build the infrastructure, people don’t come back,” observed Ronald Lewis, who runs the House of Dance and Feathers, a cultural museum, from a building in his backyard.

The conference afforded ample time to see New Orleans and its immediate vicinity. Afterward, curious to see more of the Gulf Coast, I set out eastwards toward Mobile, Alabama. Equipped with a list of locals to call, I stopped periodically to follow my nose. Leaving Louisiana along Interstate 90, I was struck by the numerous “hurricane evacuation route” signs and the waterfront homes built atop stilts, some towering nearly two storeys above ground.

In Mississippi, old-timers casting for saltwater catfish and drum and seining for crabs seemed nonplussed. “We don’t think about it,” one told me. “Most of the spill was on the other side of the bridge,” her companion chimed in. A short distance past that bridge, in Biloxi, a cluster of newly-built casinos and fairly busy seafood restaurants anchored a beachfront that seemed economically vibrant. Much of the interstate was recently paved, and I passed more active railways than I’m used to in south-central Ontario. At the very least, the infrastructure was chugging along.

I gave the casinos a pass, opting instead to track down a church in Moss Point, a stone’s throw north of the Escatawpa River, where soil tests soon after Katrina found contamination from dioxins, arsenic and microorganisms. The Greater First Baptist Church of Escatawpa and pastor Richard Young weren’t listed in any directories, but after navigating a maze of rural roads my target was soon in sight. No signage marked the derelict red brick soon building, but a cross inlaid into a stone frontispiece told me I’d found my brownfield. Workers putting the finishing touches on a building next door confirmed that, nine years after Katrina devastated Greater First Baptist Church, the parishioners finally had a new home.

“We’d just borrowed from the bank and completed a new fellowship hall and tutoring room, and then three days later Katrina hit,” Young said, leading me inside the old building’s battered shell and recalling events that left his 250 congregation members churchless. “The wind knocked windows out both sides and the front side of one of the additions was blown right out,” Young said, explaining that industrial plants had left the Escatawpa River badly polluted, so when the storm surge reached the church it left several feet of toxic sludge inside, not to mention mouldy walls. To make matters worse, the local sewage plant released its contents during the storm. Young and 20 of his congregants swept out the toxic muck and carried on, holding prayer services inside the wreckage all while raising funds and building the new church. “We put in for compensation and small business administration, but we didn’t get any money, or loans,” Young said. “Everyone here had insurance, but what happened was called a surge, not a flood, and the insurance companies didn’t pay for surge. What you see here is faith and fellowship from the community.”

The next day, in Alabama, I met Casi Callaway of Mobile Baykeeper at a breakfast the group held at a downtown hotel to court the local business community and promote efforts to restore Mobile Bay, which has suffered at the hands of hurricanes and the oil spill. One project, to build 100 miles of oyster reefs, stands to boost commercial and recreational fisheries, but will also protect vulnerable coastlines from erosion, flooding, and pollution.

“Erosion is the biggest reason Louisiana loses a football field of land every 15 minutes, though we don’t lose quite that much in Alabama,” Callaway said, explaining that a structural reef helps keep sediment and sand close to shore where it can nurture marsh grasses that, in turn, dampen wave action. “It’s not just about growing oysters on the bottom of the bay, it’s about protecting the shoreline,” she said. A further benefit, she added, is fighting pollution. A single adult oyster filters 50 gallons of water daily, and water vegetation absorbs pollutants such as oil. “It gives you a commercial fishing economy, a recreational fishing economy, a birding economy, not to mention clean water for swimming and drinking water,” Callaway said. “We want to build the kind of resiliency for this community that hits the triple bottom line—environment, economy and community.”

Indeed, I found much to take home. Dead zones in the Gulf caused in part by agricultural runoff nearly 1,000 miles upstream taught me that activity in one area of Canada, or even across a border, can have a significant environmental and economic impacts on another—something to think about, say, around the Great Lakes. Another lesson is that green infrastructure is every bit as vital as grey infrastructure because natural buffers and filters ultimately protect communities.

When push does come to shove, though, what ultimately determines resilience is a community’s faith and perseverance—not to mention the ingenuity of stilts.