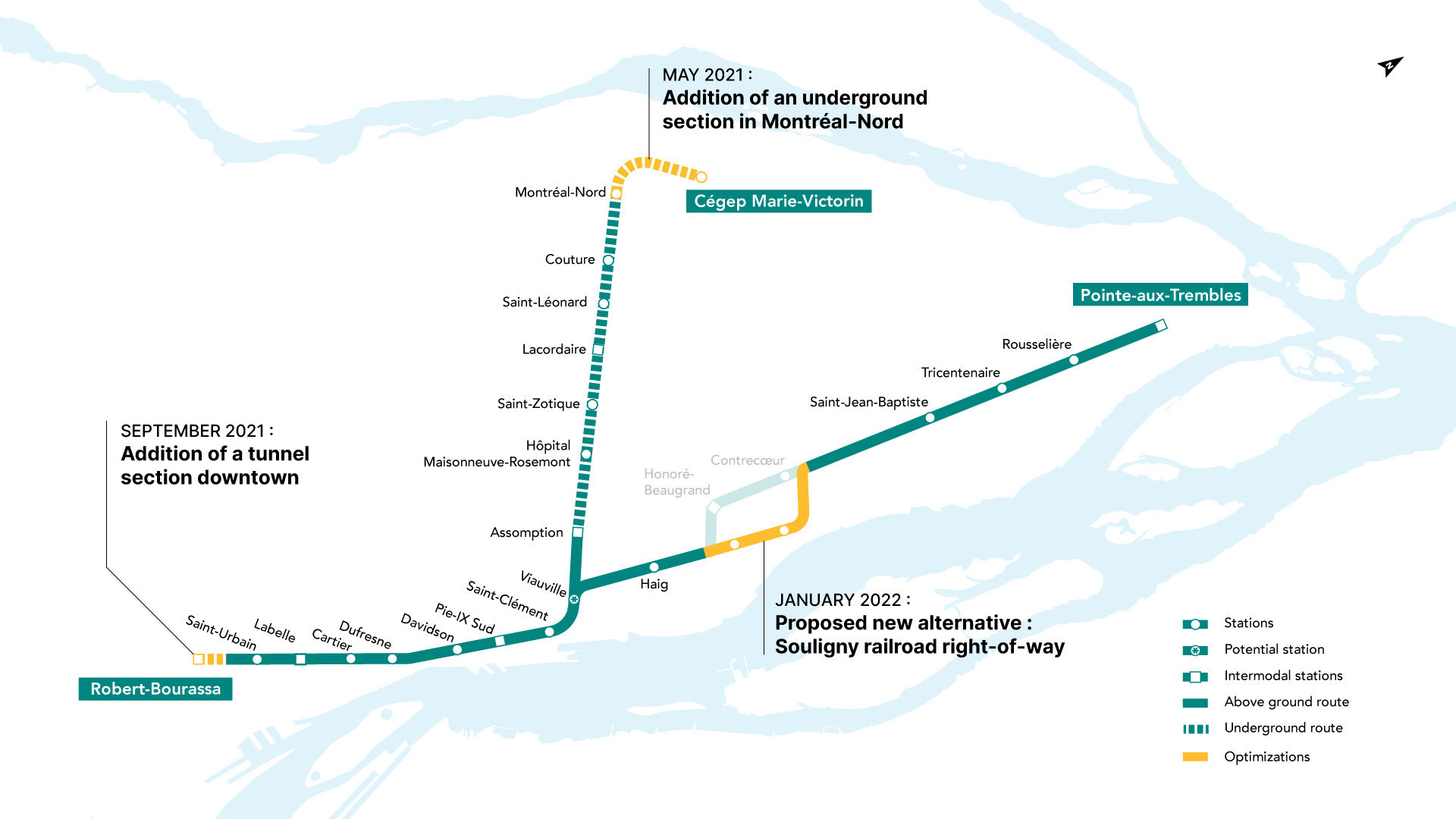 In response to consultations with citizens and stakeholders held over the past year, CDPQ Infra announced an important solution optimizing the route of the REM de l’Est. CDPQ Infra has secured an option to purchase from CN a segment of the Souligny railroad right-of-way in the heart of Mercier-Est, which will avoid the need for a section of route on the Sherbrooke Street East commercial corridor.

According to CDPQ, this adjustment to the route of over more than 4.5 km provides a solution to one of the main issues to come out of public consultations, and follows discussions and work conducted since last fall.

By bordering the Tétreaultville neighbourhood, the REM will be able to serve a substantial population pool lying farther away from the green line of the métro, reuse an existing railroad right-of-way, and incorporate the route into a broader transit corridor, thereby reducing impacts in this sector. The agreement between CDPQ Infra and CN signed on December 30, 2021 covers a segment situated between Honoré-Beaugrand Street and Georges-V Avenue.

The exact insertion of the REM de l’Est through this new corridor will be determined following discussions to present this new solution to stakeholders and citizens, answer their questions and obtain their input on this portion of the route.

Using this railroad right-of-way in the heart of Mercier-Est brings the proportion of the REM de l’Est route running on existing private or underground rights-of-way to 50 per cent.

“The REM de l’Est is an important transit solution for the development of the east of the city,” stated Christian Ducharme, Vice-President of Engineering, CDPQ Infra. “We are constantly evaluating all options to ensure that the project will be embraced by the communities served while maintaining its technical and financial viability. This new alternative addresses concerns that have been raised, and also provides an opportunity to better serve the residents of Tétreaultville, who currently do not have access to adequate public transit. We will quickly hold meetings with the public and stakeholders to launch a dialogue on this new solution.”

Over the course of 2021, which was a year of listening, consultation and analysis for the project team, three major points for improvement were identified in the REM de l’Est reference project:

Each of these issues has been carefully considered, through consultation and rigorous analysis of possible options. Today’s announcement is a concrete proposal for a solution to avoid routing the project on Sherbrooke Street East in the Tétreaultville area.

A similar process is underway to propose solutions for the route near Morgan Park. Regarding downtown Montréal, a first step in the solution was identified in the fall, with part of the route running underground. Once the report by the independent expert committee has been received, the architectural and urban integration vision will be presented to the public, providing details of enhancements to the project made by the architects, working together with the experts. The architectural proposal will then be the subject of a new phase of discussions with the public and stakeholders. The quality of the proposal, both in terms of architecture and urban planning, will also help alleviate concerns that have been raised.

Since the REM de l’Est project was launched in December 2020, CDPQ Infra has made constant efforts to consult the public and answer their questions about the project. Close to 32,000 people have taken part in these consultations. Citizens’ concerns were analyzed by the CDPQ Infra teams, leading to changes in the project. This process will continue in the coming months. Today’s announcement follows on from substantial optimizations to the project announced during 2021, particularly:

The REM de l’Est project is still at the detailed planning stage: several major steps remain to be completed, particularly the entire information and consultation process with the Bureau d’audiences publiques sur l’environnement (BAPE). When complete, the REM de l’Est is designed to handle over 130,000 trips per day, becoming a credible alternative to solo driving in the East of Montréal. It will serve important economic hubs, relieve the isolation of certain neighbourhoods, and contribute to growth in Montréal East.