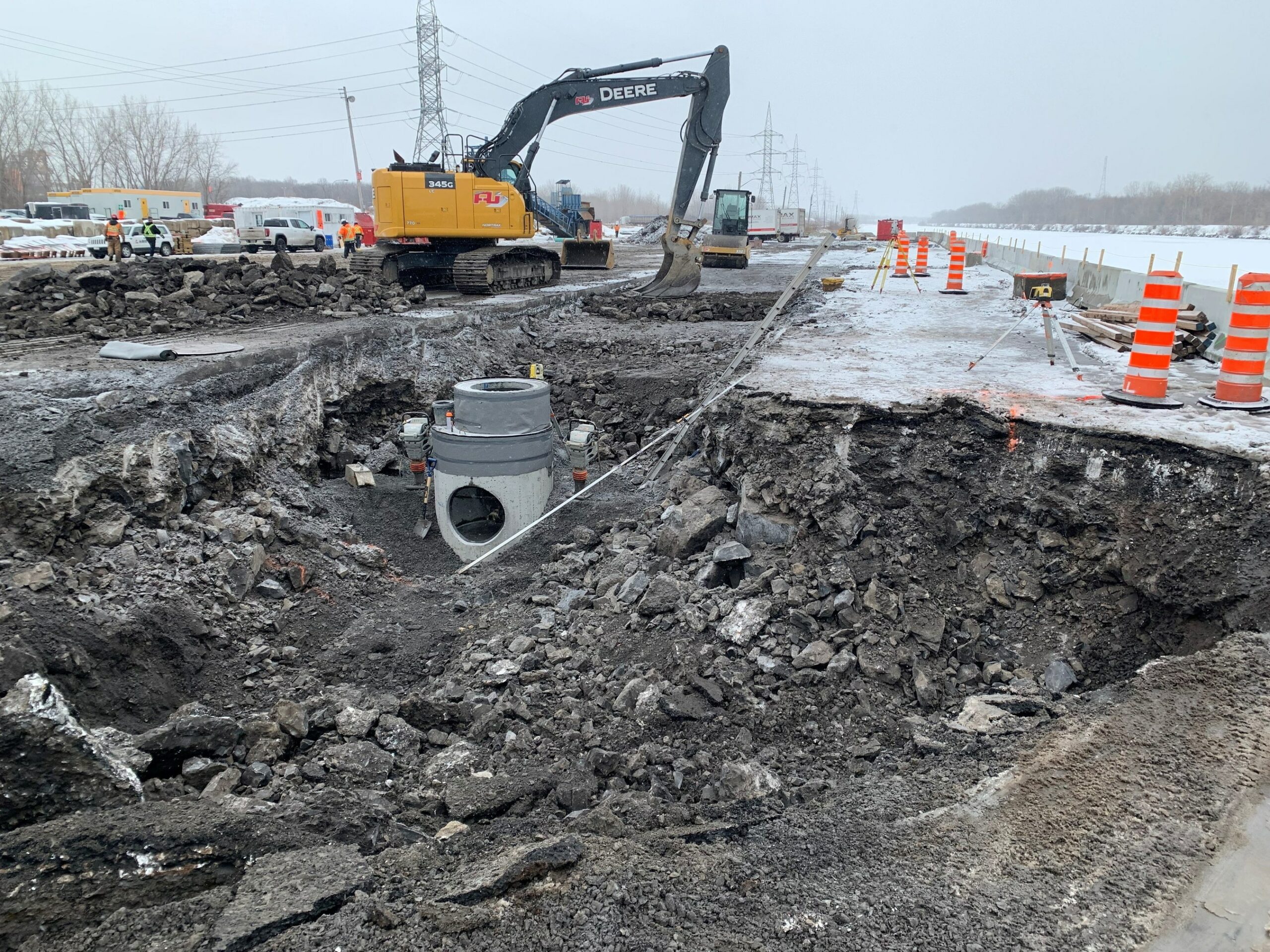 One of Canada’s smallest but most strategic harbours, the Port of Ste-Catherine, near the Lachine Rapids and facing Île-du-Seigneur on the south shore of the St. Lawrence River, will be restored to its former glory within the next two years, thanks to major infrastructure renewal work that will result in the construction of more than 1.5 kilometers of storm water pipes, drainage and concrete slab repairs.

This was announced by Marc-André Loiselle, president and CEO of the ALI Excavation Group, who stated that the execution of the work had to deal with major issues due to the presence of rock, the proximity of waterways, and the excavation of trenches more than 7.0 m deep.  Also, the sequence of work orchestrated by Ali Excavation posed multiple challenges, including not interfering with the proper logistics of port operations, ensuring the free flow of routine daily activities, and dealing with extremely tight deadlines.

“The presence of an important pumping system and the renovation of 7 water treatment units also represent another challenge from the point of view of excavation, which is carried out during the winter period,” continued Mr. Loiselle, while emphasizing all the expertise of his company and its employees in the field of civil engineering work under construction, with a view to efficiency, productivity and safety.

Excavation work began in late January 2022. Sawing, vertical drilling and concreting will be carried out starting in February and will be executed throughout the winter. The paving work will be carried out with the arrival of good weather and optimal climatic conditions next spring. The 375 mm to 675 mm diameter pipes that will be replaced over a distance of 1.5 kilometers are at the heart of this thorny civil engineering mandate.

“The construction of the Côte-Sainte-Catherine lock of the St. Lawrence Seaway, which has passed through Sainte-Catherine since the late 1950s, was the source of the municipality’s growth and development,” said Mr. Loiselle, noting that the municipality had become an important commercial area due to its location along Route 132.

In fact, the Sainte-Catherine wharf, also known as the Baillargeon wharf, marked an important milestone late last summer, concluded Mr. Loiselle, when it received wind turbine parts from Europe destined for a local renewable energy project in the Montérégie region: one of the largest shipments in its history.

The work will take two years to complete.