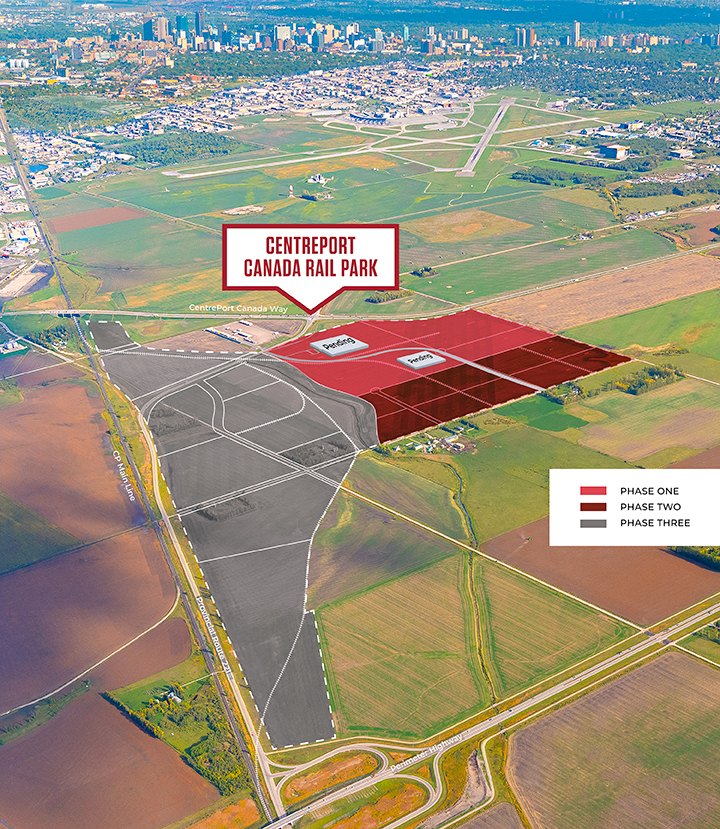 The Government of Manitoba and CentrePort Canada Inc. announced that an agreement has been concluded with a development partner for the CentrePort Canada Rail Park. Focus Equities Inc., a Canadian real estate developer, will be the developer of the rail-served industrial project, with construction to begin in the coming months. The Rail Park is to provide a critical stimulus for significant economic growth, trade, business attraction and investment, job creation and increased tax revenues for Manitoba.

“As we emerge from this pandemic our government is focused on working with our economic development partners, industry and trade to unlock Manitoba’s true economic potential,” said Manitoba Premier Heather Stefanson. “This development – in the heart of the country – will support our vision to make Manitoba a true trade gateway nationally and internationally. Expected to create more than 4,800 direct and indirect jobs and have a significant impact on the province’s GDP, the Rail Park project will help us bolster our economy and attract new businesses, now and well into the future.”

The 665-acre Rail Park is located within CentrePort Canada, a 20,000-acre inland port project in the Rural Municipality of Rosser, within the capital region of Winnipeg. The Rail Park will offer globally-connected businesses with large-volume shipping needs the ability to access, transfer, and transport goods between road and rail, with close access to Winnipeg’s James Armstrong Richardson International Airport.

“With global supply-chain issues affecting the industry, there has never been greater demand in North America for a centralized logistics and shipping location for rail, truck and air than now,” said Ken Mariash, owner of Focus Equities Inc. “We are already in negotiations with global brands who are interested in choosing our Rail Park land for their transportation infrastructure needs. Focus Equities is honoured to be awarded the CentrePort Canada Rail Park project and thanks the Province of Manitoba and CentrePort Canada Inc.”

The Rail Park project utilizes the advantages of Manitoba’s central North American geographic location and plays a critical role in enhancing and growing Manitoba’s trade and investment profile domestically, within the continent and around the globe.

In 2018, CentrePort Canada Inc., with the support of the Province of Manitoba, issued a Request for Proposal to attract a private developer for the Rail Park project. Focus Equities Inc. was selected as the most experienced and qualified developer following that process. The company provides a full range of development, investment, financing, construction, and operation of complex real estate, energy, and infrastructure projects.

“This development, strategically situated at the hub of international trading corridors, capitalizes on Manitoba’s historical strengths as a leader in trade and transportation and positions the province as a key player now and well into the future,” said David Filmon, Chair, CentrePort Canada Inc. Board of Directors and Chair, MLT Aikins LLP.

The announcement builds on other investments made by government to support the expansion and growth of CentrePort Canada and to connect rail service with other forms of transportation. Most recently, Manitoba has invested in safety improvements to the Perimeter Highway as a first step towards the Winnipeg One Million Perimeter Freeway Initiative. Major upgrades are underway, such as the $135 million interchange project at PTH 100 and St. Mary’s Road and preliminary planning for a new diamond interchange at PTH 100 (south Perimeter Highway) and PTH 3.

“All inland ports have rail at the heart of their developments and the CentrePort Canada Rail Park is the linchpin in realizing the vision for a true trimodal inland port – and North America’s largest – right here in Manitoba,” said Diane Gray, president and CEO, CentrePort Canada Inc. “As an integrated rail corridor connecting Canada through the U.S. to Mexico comes to fruition, significant opportunities exist for CentrePort to continue to grow and offer solutions to companies that manage part of their supply chain by rail. We are excited to work with Ken Mariash and the team at Focus Equities Inc. as they use their wealth of expertise in industrial real estate development to bring this project to life.”