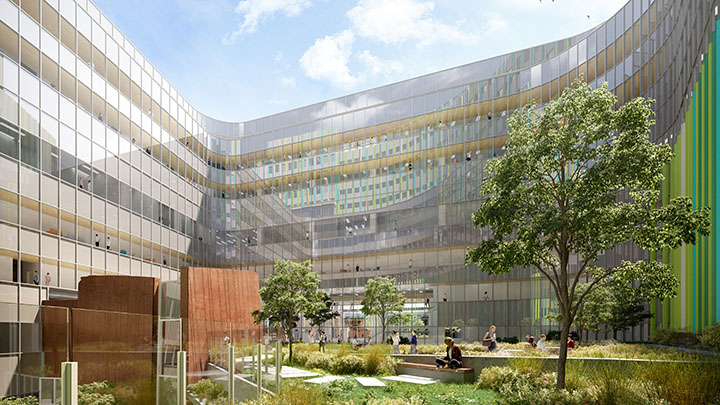 Construction of the $1.4-billion cancer research and treatment centre – the largest government infrastructure project in Alberta – remains on time and on budget.

Thirty per cent of the project’s total concrete, or 37,000 cubic metre, has been poured as work progresses on the 12-room radiation therapy department.

With a total concrete volume of 125,000 cubic metres, it will be the largest stand-alone cancer centre in Canada when it begins offering improved care for patients in 2023.

The Tom Baker Centre reached full capacity in 2003. Since then, cancer rates have continued to rise at a rate of three to five per cent a year. Every day, 54 Albertans learn they have cancer, a number that is expected to grow to more than 70 by 2030 due to aging and population growth.

The project is expected to add 1,500 jobs for Calgarians over the next six years. Four cranes and about 300 workers are currently on site with construction well underway on the lower levels, all five parkade levels and the first clinical areas of the centre.

Development of the radiation therapy department will continue later this year with the pouring of more than 10,000 cubic metres of concrete and the construction of 12 steel and concrete vaults. Each vault will have 1.8-metre-thick walls to protect patients and families from radiation exposure. This will nearly double the current Tom Baker Cancer Centre’s capacity to treat patients with radiation therapy – currently more than 3,300 a year – to meet an anticipated 60 per cent increase in demand by 2030.

The Calgary Cancer Centre will be integrated with the Foothills Medical Centre and will replace the aging Tom Baker Cancer Centre. Albertans will have an opportunity to tour life-sized replicas of patient treatment rooms this February.

Services at the centre will include: