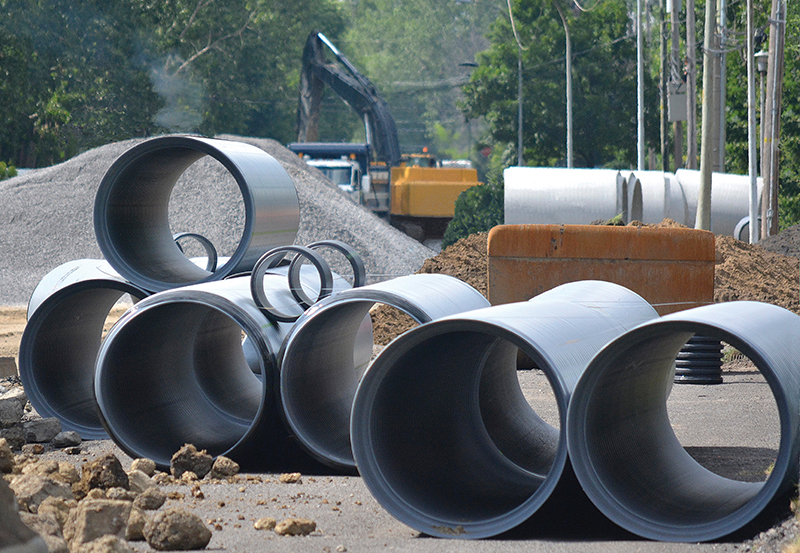 For ReNew Canada’s recent Linear Water Infrastructure survey, engineers, and consultants from across the country weighed in to provide expert perspective on renewal options—mainly rehabilitation and replacement—that can be implemented, independently, or jointly.

Our research in part one indicated that a variety of factors traditionally impact decisions around linear water infrastructure renewal, including:

According to a report a commissioned by the Residential and Civil Construction Alliance of Ontario (RCCAO), millions of cubic metres of treated drinking water are being pumped into the ground every year across Ontario municipalities as the result of leaky and broken pipes.

The study indicates that many Ontario municipalities report an estimated leakage rate of at least 10 per cent. However, it also notes that reports by consultants who conducted actual assessments show that rates in Ontario could be as high as nearly 40 per cent.

“These findings are quite alarming and really reflect the fact that our water infrastructure across Ontario is aging and in dire need of repair,” says RCCAO’s executive director Nadia Todorova. “I think the overall message from the report is that it pays to fix the systems. If we don’t look at after our linear infrastructure and infrastructure in general, it really will lead to a myriad of issues starting from public health concerns.”

A bright spot in the report, says Todorova, is that there has been significant improvement in asset management practices across Ontario municipalities. “So, in terms of what the government can really be focusing on, is staying the course and continuing to provide funds for asset management projects.”

“Municipalities are different sizes and they’re at different levels of sophistication. But the fact that asset management is being used at all—not always listened to perhaps, but always used—I think, is a big step forward.

The type of leaks facing municipalities have a direct impact on what strategy —rehabilitation or replacement—will be used, according to Devan Thomas, global conveyance market leader for AECOM.

“Water main leakages are doubly bad,” he says, “because not only do you have to treat and convey, it’s also robbing capacity that would be for other normal uses.”

There are a lot of tools now to inform leakage and what agencies can be doing to find that right balance of leakage management programs, says Thomas. “Chances are that if you’ve got old pit cast iron pipe in the ground, you’re dealing with a lot of leakage. But there’s a lot of good structural integrity there, too.

“Just because you have high leakage doesn’t necessarily mean you need a full water main replacement program. You can start to tackle some of these things and take advantage of the remaining structural health the pipe.”

Bill Shea, director of distribution and collection for Toronto Water, which is responsible for all aspects of the city’s water supply and treatment, knows a thing or two about old, leaky pipes.

The RCCAO study also noted that in Toronto, 11 per cent of the more than 6,000 kilometres of water mains are more than 100 years old. The city has consistently reported a leakage rate of 10-15 per cent, which means it wastes 103 million litres per day. The volume of losses is equivalent to supplying the daily demand of a system servicing a population of about 250,000 people or filling more than 15,000 Olympic-sized swimming pools every year.

“Everybody probably knows that old cast iron water mains are extremely thick, but if they suffer from corrosion, they tend to fall apart all at once. And the fact is, once you start digging to fix one, they start popping all over the place. So, if you leave them alone, you might be okay. But the reality is we can’t leave them alone.

“We have a comprehensive program of rehabilitating those water mains and Toronto Water spends over a billion dollars a year in capital replacement—over the last five years over $300 million dollars on just relining.”

When it comes to paying for water infrastructure repairs, the comparatively low rates Canadians pay for their water is always a hot topic. How can municipalities convince citizens to pay more for their water?

“People don’t value what they don’t pay for,” says McKaigue. “Water is incredibly cheap in Canada. And so traditionally, for many municipalities over the years it was almost cheaper to produce the water even though they’ve lost it.”

And it’s only now, he says, with the advent of asset management that governments are beginning to recognize that the real cost isn’t matched by what people are paying for water now, and what they could easily pay for.

“Compare that to people’s cell phone bill, and you might find a little more political motivation,” says McKaigue.

Rates have been increased in most jurisdictions, adds Thomas, but that may still not be enough, although water ratepayers are becoming more sophisticated when it comes to understanding investments in infrastructure and the corresponding maintenance of service levels.

“When I work with owners being able to articulate the wise use of available funding is a big focus for them, so are they putting [funds] in the right bucket, the right operations and maintenance program or the right capital improvement program,” says Thomas.

“And asset management programs or plans, which are now mandated in a lot of jurisdictions as a requirement for getting funding, are a critical tool in being able to articulate that level of service promise that they’re making to ratepayers.”

Make it a combo

According to ReNew’s survey, when working with municipal clients on linear water infrastructure renewal projects, respondents most often recommend a roughly even split between full open-cut replacement and trenchless excavation solutions. Nearly a third of respondents (31.73 per cent) indicated a preference for a combination of methods. These decisions are made based on assessment data. A clear majority (93 per cent) of respondents indicated that their municipal customers use leak detection or condition assessment technology before proceeding with a project.

“The right mix is what agencies are doing is usually driven by the condition of the existing infrastructure and what it needs,” says Thomas.

It is also capacity related he adds. If the pipes need to be upsized it’s probably not going to be a rehab program.

“More and more though, the agencies are looking to minimize surface disruption. The rehab technologies are getting more cost effective and so providing a greater incentive to do trenchless than what was otherwise available.”

Conducting condition assessments will drive the mix of rehabilitation versus replacement, he says. “Knowing what the health of the pipes actually is and what the viable technologies are to rehabilitate them if you can and replace them if you have to.”

According to Shea, at one point, the City of Toronto was experiencing approximately 1,500 water main breaks a year, and now, six years later, is down to about 700, through a combination of relining and replacement.

Thomas points to a successful program undertaken by the City of Calgary over the past few decades that takes a proactive approach to protect and replace aging assets, including water mains. Since 1980, emergency water main repairs have been reduced by 73 per cent. The reduction is thanks to a water main replacement program that replaces corroded mains with new PVC pipe, and by reducing the rate of corrosion through an anode retrofit program that adds cathodic protection to existing water mains.

“They’ve transitioned away from replacement and are doing almost exclusively now cathodic protection retrofits,” says Thomas. “And at a far more cost-effective clip, than replacement alone.”

However, the use of asset management will continue to be an imperative piece of the puzzle to make sure that linear water infrastructure is rehabilitated and looked after in a proper way, says Todorova.

Featured image: Millions of cubic metres of treated drinking water are being pumped into the ground every year across Ontario municipalities as the result of leaky and broken pipes, according to a RCCAO study. (RCCAO)