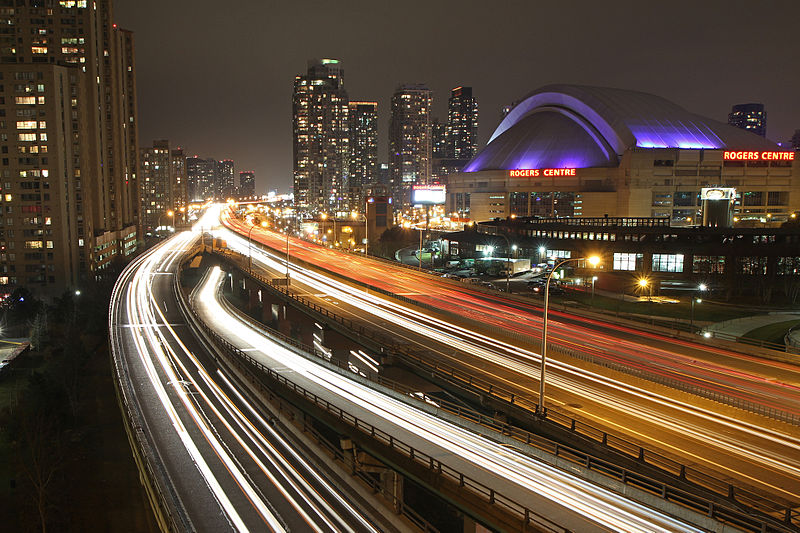 The GTA is growing by 110,000 people per year. By 2019 the region’s population will top 7 million. Traffic congestion is choking the downtown and the number of vehicles using the roads grows every year. Commute times get longer and people’s frustration rise in tandem. Toronto desperately needs more transit and, indeed, new subways, heavy surface rail and light rail projects are planned and approved – but often with little or no money attached to build them. The grand tally of unfunded City transit and infrastructure projects sits at $33 billion.

Downtown Toronto is served by only two multi-lane city-owned highways, the Gardiner Expressway and the Don Valley Parkway. These two roads are jammed with traffic all day and much of the night. And the elevated Gardiner Expressway, opened in 1964, is falling apart. The estimated bill to fix this highway is around $2 billion.

So Mayor John Tory’s money problem: where are the billions of dollars needed for transit and infrastructure going to come from? Tory campaigned on keeping property tax increases at or below the rate of inflation. So no great joy to be found there. Sell Toronto Hydro? Increase parking levies? Both got nixed by Council or business lobbies. That left another option – put tolls on the Gardiner and the Don Valley.

The City estimates tolling the two highways would raise a minimum of $200 million per year, if the toll for a one-way trip is $2. Increase the tolls, and the revenues also go up considerably. Sounds pretty easy right?

Actually no. Many residents of the 905 municipalities, and the outer suburbs of the 416, reacted with fury. This is another tax grab from hardworking commuters, that won’t affect the downtown elites! And their political leaders have taken up the cause on their behalf.

Mississauga Mayor Bonnie Crombie has cried foul and has threatened to retaliate by putting tolls on roads leading to Pearson Airport. Tory fired back that 40% of the 230,000 vehicles that travel the Gardiner every day come from outside of Toronto. Why shouldn’t the 905ers bear part of the cost of repairing it by paying tolls? No, responded the antis! “Why should we pay again for old highways that were built with the taxpayers’ money in the first place?”

Nonetheless, Toronto Council voted overwhelmingly in favour of pursuing the tolling option at their December meeting. So that should be the end of it. Right?

No again. In order to proceed, Legislative approval is needed from Queen’s Park. Which Premier Kathleen Wynne offered to Tory enthusiastically. At first. Then she started to hear the anguish of her Liberal caucus members from the 905, who are feeling the sting of their constituents’ anger. And Opposition Leader Patrick Brown, whose Progressive Conservatives have a commanding lead in the polls in the run-up to the 2018 provincial election, has come out unequivocally against tolling – in a pitch to stand up for the beleaguered commuters and to gain support in 905 ridings. The provincial NDP has also come out in opposition. Faced with all of this, in her most recent interview on the subject in late December found Wynne hedged her bets.

What we don’t know

We are now left with a number of unanswered questions on the proposition to toll or not to toll: will Council vote in the early summer of this year to go full-speed ahead with tolling the two highways? Will the Wynne government pass the legislation needed to let it go ahead? Could the tolling be in place before the June 2018 provincial election which could install a PC or NDP government which has promised to stop it? Will public support swing towards or against the proposal as the debate unfolds?

If motorists stop using the toll roads, do they spill out onto other nearby roads, adding to their traffic woes? How can new technologies be employed to track users and charge them? Would the Gardiner/DVP tolling regimen look anything like the system on Highway 407?

Some of these questions might be answered at the upcoming Empire Club of Canada panel event, For Whom the Road Tolls on February 8 at the Arcadian Court. A blue chip panel will be presenting expert advice not yet heard widely in Toronto, and arguing the pros and cons of tolling. Panelists include: Mississauga Mayor Bonnie Crombie, Toronto Councillor Josh Colle, Teresa Di Felice – director of government relations for the Canadian Automobile Association (South Central Ontario) and Mahrokh Arefi – CEO of worldwide tolling technology company Emovis US. The moderator is Rod Phillips, chair of Postmedia.

This event is sponsored by: Residential & Civil Construction Alliance of Ontario, Bestpass Inc., Enterprise Public Affairs and Mr. Discount Ltd. (Enterprise represents Emovis US). ReNew Canada is the media sponsor for the event.