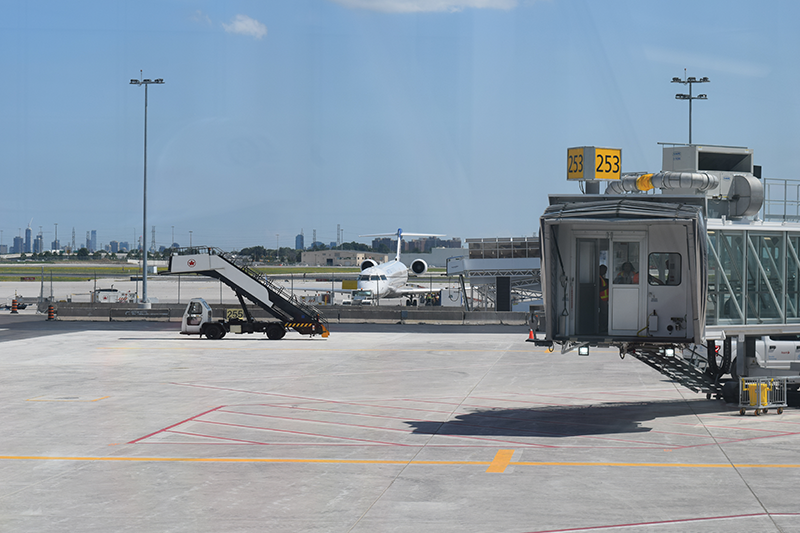 I remember the trip fondly because I was really excited to see Camden Yards. I was heading to Baltimore in mid-March to attend a tradeshow, and the venue was just down the street from the ballpark, home of Major League Baseball’s Baltimore Orioles.

I arrived at Pearson International Airport (they offered direct flights to Baltimore at a convenient mid-morning departure time), parked my car, proceeded through customs, and then went off to find my gate. The journey to the gate was also unforgettable, but not for the same reasons as the park.

The space was primarily built using pre-fabricated style buildings, and the seating in the area was small (I remember about 40 seats) considering the number of gates it serviced (approximately 4-6 gates with doors leading directly to the tarmac, with outdoor paths leading to the aircraft). It wasn’t a horrible experience by any stretch, but it did seem out of place, as every other gate I had flown out of at the airport was stocked with amenities and modern features.

As it turns out, that area of the airport was next on the list.

Based on the most up-to-date statistics, Pearson’s passenger traffic is growing. Over the first nine months of 2019, the number of passengers travelling through the airport was up just over 700,000 from the same period in 2018, for a total of just over 38.6 million passengers.

The release of the 2017-2037 Growth Plan, entitled Growing Responsibly, outlined the airport’s plan for attacking the issues it expects to encounter over the two decades to follow: increases in passenger numbers, connectivity needs, addressing climate change, and the need for regional transportation solutions.

The executive summary of the report provides a more digestable version of the report’s extensive content, broken down into the key areas of discussion. Included in this is a subheading labeled Airside System and Passenger Terminals. The opening of the section states the following: “We expect that airside systems and passenger terminals will be able to accommodate the demand we forecast over the course of this Master Plan. Both critical elements of our operations, they largely have sufficient capacity to meet demand over the next two decades—and where this is not the case, they can be expanded or made more productive.”

The area I walked through that day in mid-March is now in the midst of a redevelopment known as the Pier G Expansion. The current iteration of the Pier G Expansion is where this 20-year journey of work on passenger terminals begins, providing that aforementioned expanded and more productive space for travellers to regional U.S. destinations.

The first priority was to expand the current staging area (gates) to comfortably accommodate a greater number of passengers waiting for their flight. The new area, part of the overall 20,000-25,000 square metre footprint, features a significant expansion of the seating, with more comfortable seating, restaurants and other typical airport amenities, and lots of windows that allow the sunshine to pour in from the east. On the day I attended the jobsite (I had to stay on the outside for obvious security reasons), you could easily tell how much more comfortable and enjoyable the entire experience was just by seeing the facial expressions of the people sitting, eating, or lining up for their flights.

Speaking of the jobsite, my guide for the tour of the outside of the Pier G project, or Gate 193 Extension as it is also referred to as, was Tony Crepinsek, the associate director of infrastructure development for the Greater Toronto Airports Authority (GTAA). I have been on many jobsites over my career, and few have been more excited to talk about a project than Tony was that day. It didn’t take long to understand why.

On the day I arrived on the active construction site, work was being done on the five new gates that are the second phase of the project. And the shiny new toys were featured prominently on the tarmac: five new glass bridges for customers boarding aircraft.

Glass passenger boarding bridges (PBBs) are fairly prominent in other parts of the world, but are not found in many North American airports. Climate and cost concerns can often override the benefit seen of the technology: another way to enhance the customer experience. The technology is pretty cool. Standardized technology allows for efficient operation of the bridges, which can be moved from gate to gate. Glass walls on both sides allow those boarding the plan to see outdoor airport operations, planes talking off, and views of the surrounding community. The bridges, made by ThyssenKrupp, were tested using real aircrafts in late summer, and have been in operation at the new gates for a few months.

The work on enhancing the passenger experience at the new gates wasn’t just about buying new glass bridges. The new passenger movement system built as part of the new gate infrastructure will make it much simpler for arrivals and departures to move through the area, with an intricate hallway network that keeps the two groups separated at all times, reducing the needs for additional customs and security resources.

Additionally, work done on the tarmac area outside of the gates has been expanded, allowing for accommodation of narrow-bodied aircraft, including such frequent passenger aircraft as the Airbus A32L and the Boeing 737. This provides the airport some additional flexibility, be it in the form of allowing aircraft heading to more in-demand U.S. cities to utilize the gates, or provide the capacity for increased service to the existing roster of U.S. destinations.

No more walking outside in inclement weather conditions to go to and from the aircraft, No more cramming inside a small waiting area. No more long walks to pick up a bite to eat. And in the process, the airport gains enough capacity to process up to two million additional passengers per year.

What was once slated as a potential billion-dollar expansion of Pier G has given way to something much more efficient, and in line with the needs of the short and medium term rather than a guess on the needs of the long term. Yes, as the Master Plan had suggested, areas like these can be expanded as demand dictates. And this immediate expansion of the area certainly will allow for that to still happen if the demand emerges. But for now, the passenger experience has been significantly improved without the need for over-the-top visions of grandeur. It clearly wasn’t needed here, so why spend millions and millions of extra dollars when it’s not necessary, especially with a laundry list of other needs for that critical  infrastructure budget.

There is still work to be done. The full expansion will lead to a total of 11 new passenger boarding bridges, as well as a host of additional amenities to enhance the passenger experience. The entire project is scheduled for completion no later than the first quarter of 2023.

Now, no matter which U.S. destination you might need to travel to next, you can expect a significantly improved experience as a result of the expansion work already completed.

This article originally appeared in the January/February edition of ReNew Canada magazine.