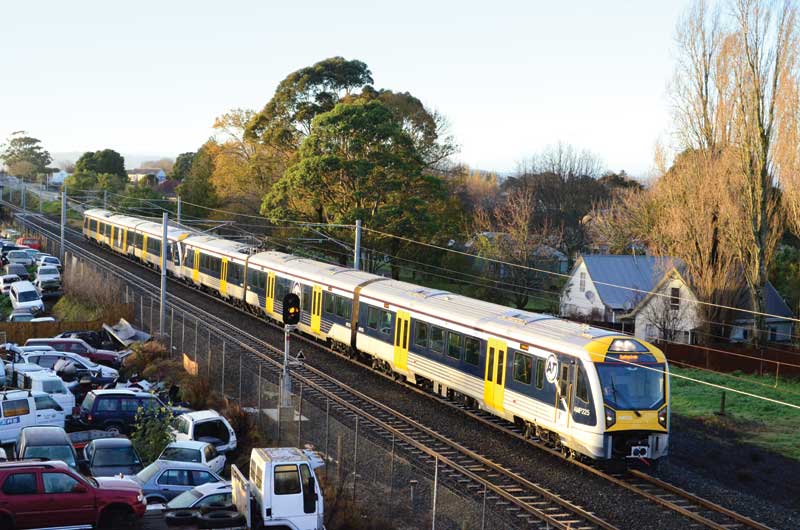 A planned decade-long project to electrify more than half the GO Transit commuter rail network in the Toronto area is in line with a global trend—and it stands to become the largest of its kind in Canada.

In April 2015, the Ontario government announced $13.5 billion toward GO Transit electrification and related upgrades as part of its province-wide Moving Ontario Forward plan. The stated goal behind the series of planned infrastructure projects is to increase transit ridership, reduce travel times, manage congestion, connect people to jobs, and improve the economy.

The plan for Regional Express Rail (RER) will see Metrolinx, a provincial government agency that operates a network of buses and trains throughout south-central Ontario, fully convert its Barrie, Lakeshore East, and Stouffville corridors, and partially convert two western ones: Kitchener from Union Station to Bramalea, and Lakeshore West from Union to Burlington.

That’s nearly 280 kilometres of corridor, representing 60 per cent of the total GO corridor length, said James Purkis, executive vice-president of RER with Metrolinx. “Out of seven corridors, we’re electrifying five, and we’re also increasing the service progressively across all seven corridors to support the Greater Toronto and Hamilton Area in terms of allowing it to grow and allowing people to move more freely.”

Purkis, who oversaw third-rail electrification in Bangkok before joining Metrolinx in April 2015, also has experience in Hong Kong and China, and said electrification is a global trend. “It’s done extensively for all the reasons that Metrolinx is now moving towards electrification,” he said. “It’s greener, and it’s cheaper to maintain and operate.”

Electric-powered trains also enable increased frequency of service. “It will allow us to run trains at higher average speeds because they can brake and accelerate much more quickly than a diesel train,” Purkis said. With 68 million rail boardings annually, Metrolinx is targeting 15 minutes between trains and forecasting five-to-10-minute reductions in the time it takes to travel from one end of an electrified line to the other.

With completion anticipated by 2025, Metrolinx is working on project design and studies for a Transit Project Assessment Process, the transit equivalent of an environmental assessment. The agency is also consulting freight carriers and VIA Rail, the national passenger service, to minimize disruption on any corridors they cohabit.

As well, Metrolinx is determining exactly what materials and services it needs. “We’re going through a detailed procurement strategy in conjunction with Infrastructure Ontario to review the best value and the way to capture the right players,” Purkis said. “Like with all businesses, there are people who specialize in all areas of rail transportation, and electrification is one of them. It’s important to make sure we prepare our procurement to attract the right people.”

Metrolinx has already retained specialists to help with initial design and will soon need contractors to handle a range of civil works, from installing poles, cables, and power systems to laying/upgrading track and building new stations.

“In certain areas, we need to either lower the track or raise the bridges to protect them for electrification,” Purkis said. “It’s the same with the stations—we’ll have a program to immunize the signalling systems and improve them to cope with higher future capacity.”

Although the province plans to fully fund the project, the federal Liberals singled out GO Transit in a 2015 election campaign pledge to boost public transit investment by $20 billion over 10 years. “There’s discussion at the moment for federal funding for some individual projects, but not specifically for Regional Express Rail at this point,” Purkis added.

Time will tell, meanwhile, as to how contractors will be organized. Purkis said Metrolinx is looking at public-private partnership (P3) formats where appropriate but emphasized that the plan is for a series of procurements rather than a single, overarching contract. “We’re working closely with Infrastructure Ontario to ensure we go through the reviews and create the right value and risk management.”

Asked what risks an electrification project might entail, Purkis said these arise in any major works program: the ability to complete what’s requested, at the desired cost, on time, and fully integrated so components work together properly.

“It’s not new technology,” Purkis said. “These are well-proven processes and techniques that have been used all around the world, so there’s risk, but there’s lots of good companies and engineers able to do that work.”

While Metrolinx is overseeing the project, the project falls within the larger Moving Ontario Forward strategy. When the province announced the funding in last year’s budget, it referenced studies published by Metrolinx and by the C.D. Howe Institute showing congestion in the Greater Toronto and Hamilton Area is costing Ontario’s economy between $6 billion and $11 billion annually.

“We’re thinking about where the region is going to grow to by 2031 and the huge population growth that’s expected,” said Vinay Sharda, director of transit policy with the Ontario Ministry of Transportation. “We have rail that connects through broad sections of the region. By electrifying it, we’re making it faster, quicker and more accessible.”

At $13.5 billion, the GO Transit electrification represents a substantial chunk of the total Moving Ontario Forward budget of $31.5 billion which, Sharda said, also includes transit, highway and other critical infrastructure projects elsewhere in the province. Funding, he explained, will come from a combination of provincial revenue streams, including repurposing existing revenues, targeted revenues, debt financing, and perhaps most controversially, asset optimization, where the proceeds from the sale of qualifying assets would be reinvested in infrastructure.

Should GO transit electrification pass the Transit Project Assessment Process with flying colours, the project as planned will put it ahead of cities such as Montreal in terms of track length. Still, with two corridors and small portions of three others remaining diesel for the time being, electrification remains a work in progress. The Milton corridor is owned by Canadian Pacific Railway, and there are complexities with electrifying track shared with commercial freight. As well, the line northeast to Richmond Hill passes through areas prone to flooding. “The feeling,” Sharda said, “is that at this point, electrify what you can based on the budget you have and then come back to those other lines potentially at a future date.”

It must have felt good last year when KiwiRail and Auckland Transport completed the electrification of the New Zealand city’s 175 kilometres of track—and reported ridership up 20 to 50 per cent on some metro rail lines.

The national government footed most of the $1-billion (NZD) bill, and KiwiRail oversaw all infrastructure-related activities, including new tracks, signalling systems, and overhead wires. Auckland Transport, the municipal transit provider, sourced the railcars, known as electric multiple units, and will continue to manage station and related upgrades as well as service provision.

Planning began in 2007 with the stated goal of improving efficiency, performance, and reliability, as well as going greener.

“Auckland has grown a large amount in the last ten years and continues to be New Zealand’s fastest-growing city,” said Nicholas French, Auckland electrification project director with KiwiRail. “Our rolling infrastructure is getting very full.”

Project delivery wasn’t without the kinds of challenges universal to electrification projects.

One immediate priority was identifying and locating underground infrastructure where there would be digging or other activity. “Being able to understand what’s below ground is critical,” French said. “We did comprehensive, intrusive surveys of the whole network to try and understand exactly where everything was so we could deconflict them at the design stage.”

The project team also needed to avoid potential equipment incompatibilities. “There are applicable international standards to ensure the compatibility of rolling stock versus infrastructure versus signalling systems and the like,” he said, adding that management also held interface meetings and used contracts to ensure compatibility.

To minimize travel disruption during busy periods, project management deployed crews at off-peak travel times. “We did as much work as possible at night to minimize the impact,” French said. “We also made use of Christmas, Easter, and other holiday periods for full shutdowns. We had to program that a year or two in advance.”

With the project fully government funded, all work was assigned through individual contracts. “PPP-type arrangements aren’t a common form of contract or way of financing public infrastructure here in New Zealand,” French explained.

What’s his best advice to proponents undertaking comparable projects? “The main surprise was the complexity of the network,” he said. “It’s always more complex than what you originally believe it’s going to be. You have to constantly be making changes to actually accommodate the infrastructure as you’re progressing.”