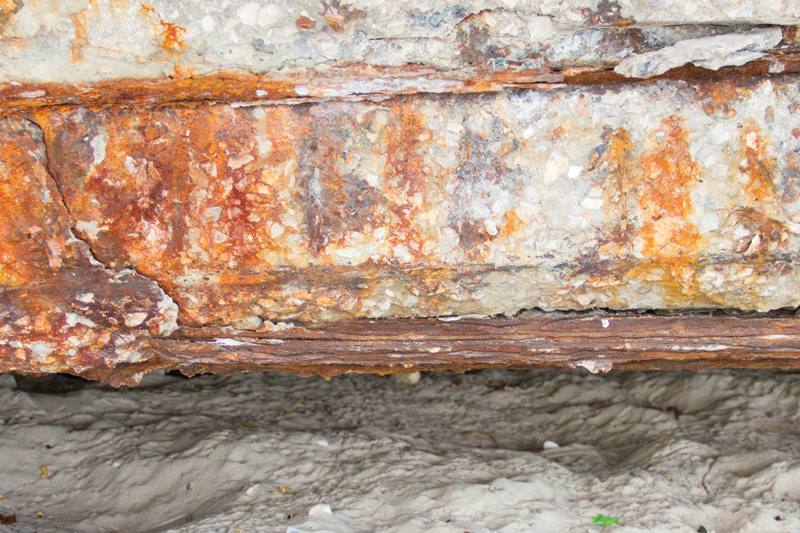 A massive explosion rocked the Regina Consumers’ Co-operative Refineries in October 2011, injuring 52 people. Investigators concluded that there was “a catastrophic failure” in a six-inch pipe. The cause of this catastrophic failure? Corrosion. The consulting engineer’s report on the explosion found that “the pipe wall on either side of the rupture was reduced by internal corrosion” and that “the pipe loss due to corrosion in the rupture area was substantial enough that the failure occurred at normal operating pressure.”

At 1:30 a.m. on June 28, 1983, a bridge over the Mianus River in Greenwich, Connecticut, collapsed suddenly, falling 70 feet into the waters below. The collapse killed three people and seriously injured three others. Why did this happen? The U.S. National Transportation Safety Board (NTSB) found that the probable cause was the “undetected lateral displacement of the hangers of the pin and hanger suspension assembly in the southeast corner of the span by corrosion-induced forces due to deficiencies in the State of Connecticut’s bridge safety inspection and bridge maintenance program.”

These are but a few examples of corrosion’s potentially deadly effect on both public and privately owned infrastructure. How much do we know about corrosion and the capacity to mitigate its effect on bridges, pipelines, and other significant infrastructure vitally important to Canada’s economic growth and prosperity? It turns out, quite a bit.

Steel used in the construction of bridges, buildings, and pipelines is not naturally found in nature; it is the product of extreme heat being applied to iron ore, creating an alloy of iron and carbon. Over time, corrosion occurs as an electrochemical reaction when iron and its alloys, such as steel, are exposed to oxygen and an electrolyte, usually water. In layman’s terms, the metal in its manufactured state is gradually returning to a natural state in the form of iron oxide, commonly known as rust, the most familiar form of corrosion. Some environments accelerate the corrosion process. For example, salt water corrodes steel more rapidly than fresh water and warm water corrodes steel faster than cold. Other environmental factors that can speed up the corrosion process include numerous freeze-thaw cycles, high relative humidity, atmospheric contaminants, and the use of de-icing materials. Furthermore, although the alkaline nature of concrete offers some protection from corrosion to embedded steel, steel in reinforced concrete can corrode. The formation of rust leads to a loss of the bond between the concrete and the steel, which over time, can negatively affect the integrity of a structure like a bridge.

We know that damage to infrastructure assets caused by corrosion can be costly in terms of human life and limb, and it can be harmful to the environment while also potentially generating major disruptions to economic activity. What we do not have a firm handle on in Canada is the overall cost of corrosion. In the United States, a study conducted on behalf of the U.S. Federal Highway Administration (FHWA) and released in 2002 revealed the direct costs associated with metallic corrosion in most U.S. industry sectors was “a staggering $276 billion”—approximately 3.1 per cent of the nation’s gross domestic product. It is not difficult to imagine that this figure, which is indeed staggering, has increased in the 11 years since the study was released. It is also not difficult to suppose that similar costs, on a relative basis, harm the Canadian economy.

Corrosion control
NACE International is acknowledged around the world as the premier authority on corrosion control. Established in 1943 as the National Association of Corrosion Engineers, its mission statement is simple and clearly articulated: to protect people, assets, and the environment from corrosion. In its 2012 white paper, Corrosion Control Plan for Bridges, NACE International identifies numerous ways in which corrosion can be controlled, extending the useful life of, in this case, bridges.

Corrosion-resistant materials can be used in the construction of new infrastructure. For example, weathering steels (special alloys that develop a corrosion resistant patina), stainless steels, aluminum, corrosion-resistant reinforcing bars, and non-metallic reinforcement can help combat corrosion. Electrochemical techniques like cathodic protection can be applied to rehabilitate bridges already damaged by corrosion. Corrosion monitoring equipment can be installed during initial construction, and design details, such as proper drainage systems, can extend an asset’s useful life considerably.

And last but certainly not least, protective coatings can be applied to steel and other materials to help protect them from a corrosive environment. This typically includes three coats of protective materials—primer, intermediate, and top coats. As NACE International notes, achieving a service life of 30 to 35 years before significant maintenance painting is necessary can be achieved by applying a three-coat system with a metallized primer as the top choice and a three-coat system with zinc-rich primer as the second choice. Coating systems have improved in recent years thanks to technological advances (such as nanotechnology), environmental regulations, and customer demand.

The human factor
Coatings can be a significant factor in slowing down the effects of corrosion on critical assets, but careful attention must also be paid to the human factor—specifically, on those who are preparing and applying the coatings. As the Finishing Trades Institute notes in a 2012 white paper, “because people are behind every process […] and because people must design the specifications for every coating and then apply it […] the root cause of nearly every coating failure is, ultimately, people.” Coating-related failures include incorrect specifications for the application, failure to use the right application tools, improper surface preparation, improper coating selection, improper application of the materials, and improper drying, curing, and over-coating.

One solution to mitigating the human risk factor is ensuring those involved in each step of the coating application process have appropriate training and certification. Until very recently there were many programs to certify industrial coatings, but unlike electricians, plumbers, and other skilled workers, there was no recognized certification program available for the workforce engaged in surface preparation and coating application. That changed in 2010 with the establishment of the Coating Application Specialist (CAS) certification, developed jointly over six years by the Society for Protective Coatings and the Finishing Trades Institute.

In order to qualify for the CAS program, applicants are required to have at least 3,000 hours of experience in abrasive blasting and spraying industrial coatings. They must then complete a minimum of 450 hours of technical training and pass a comprehensive examination. Once he or she earns this certification, a coating application specialist will specialize in corrosion mitigation of steel and concrete used in, for example, infrastructure assets, buildings, public utility facilities, and shipping vessels.

Tragic incidents like the Regina Consumers’ Co-operative Refineries explosion and the Mianus River bridge collapse are connected by a common thread—corrosion. It is not suggested that bridges or pipelines no longer be built because corrosion can lead to deadly outcomes. To the contrary, public and private infrastructure is an essential cornerstone of Canada’s continued economic vitality and the prosperity of Canadians.

Due to the Government of Canada’s 2013 Building Canada Plan, more than $47 billion in new funding over ten years will be devoted to building public infrastructure. A golden opportunity exists for the country to assume a leadership role in combating the effects of corrosion on critical infrastructure assets.

Parsons awarded contract for the Faro Mine Remediation project