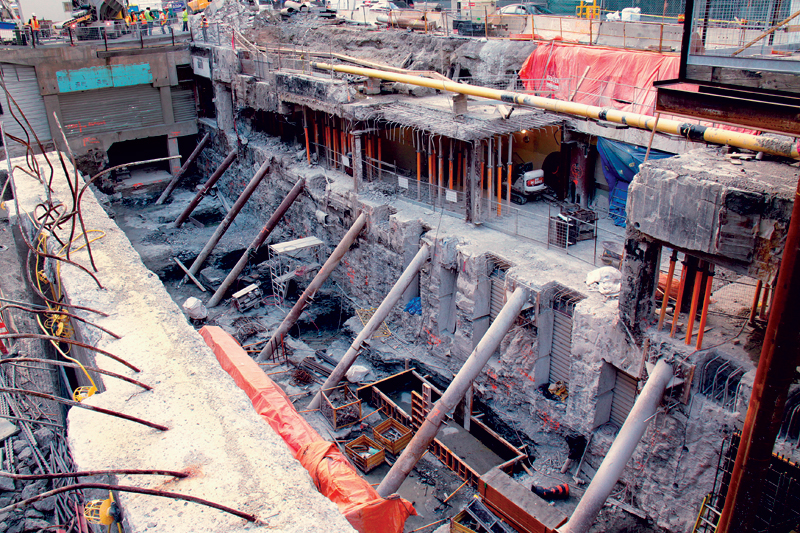 In 2012, the Damage Information Reporting Tool (DIRT) reported more than 230,000 incidents of underground utility damage during excavation across Canada and the United States—up more than 10 per cent from 2011. The report also found that almost 20 per cent of these events were caused by insufficient locating practices.

During the design phase of an infrastructure project, it is often difficult to get an accurate picture of subsurface utilities, which can create unnecessary risk and liability for project stakeholders. Data provided to project managers, engineers, and designers are frequently outdated, inaccurate, or unavailable. Adding to the problem is the fact that, historically, there has often been a lack of regulation around collecting, recording, and managing subsurface data.

In response to these challenges, the American Society of Civil Engineers (ASCE) formed a committee in 1996 to create the first national consensus standard in the world, defining the quality of utility location and attributing information included on plans. Known as ASCE 38-02, Guideline for the Collection and Depiction of Existing Subsurface Utility Data, the standard defined the concept of subsurface utility engineering (SUE): a process for managing risk by identifying and controlling the quality of underground utility infrastructure data used in the design, development, and construction of a project. Many countries have followed the United States’ lead by creating similar standards, including Malaysia, Canada, Australia, and most recently, Great Britain, which is due to pass its PAS 128 specification in 2014.

Developed and refined over the past 20 years, SUE is a branch of engineering practice that classifies information according to quality levels with an objective to vastly improve data reliability. This provides project owners and engineers with a benchmark to determine the integrity of utility data at the outset of an infrastructure project. Once collected, data is typically presented in CAD format or a GIS-compatible map. A conflict matrix is also created to evaluate and compare collected utility information with project plans, identify conflicts, and propose solutions.

The Canadian Regulatory Framework
Though SUE is not officially legislated in Canada, in 2011, the Canadian Standards Association (CSA) released S250, Mapping of Underground Utility Infrastructure, which builds upon ASCE 38-02 and outlines best practice for mapping and managing records for underground infrastructure. The standard developed out of a recognized need by utility owners, the Federation of Canadian Municipalities, contractors, and locators to improve data collection processes and clean up existing records. The standard also provides data sharing guidance for utilities that need to analyze the position of their assets versus another utility’s assets (such as a pipe versus a cable).

CSA S250 complements and extends ASCE 38-02 by setting out requirements for generating, storing, distributing, and using mapping records to ensure underground utilities are readily identifiable and locatable. Accuracy levels expand upon Quality Level A (see sidebar for all quality levels), prescribing a finer level of detail to define the positional location of the infrastructure. The standard also defines accuracy parameters for as-built records and specifies the utility attributes to be used for describing and depicting newly built underground utility infrastructure. This promotes a consistent, effective approach to data collection that ensures the quality of utility records well into the future.

By encouraging a management system’s approach to mapping and record keeping, municipalities and their service providers are able to increase the accuracy and reliability of their data in order to reduce potential utility damage and service interruptions.

Though relatively new, the standard has already been integrated by several authorities including the City of Toronto. Utility and right of way owners such as Union Gas and the Ontario Ministry of Transportation are also looking to improve their current records practices based on guidance provided by CSA S250. The CSA is encouraging all organizations to leverage S250 as a records management framework going forward since it could quickly become a facet of municipal construction contracts and eventually be legislated in Canada.

SUE in Infrastructure Design
As the concept of SUE gains popularity both nationally and worldwide, many municipalities and engineering firms are beginning to recognize it as an instrumental component of the design phase.

The process has played an integral role in the Union Station Revitalization, set to bring many new enhancements to riders such as a roof and glass atrium over passenger platforms and railway tracks, new staircases, additional vertical access points, and an overhaul of the platforms and station concourses. GO Transit is also expanding its services and infrastructure with a goal to increase ridership, enhance speed, and anticipate growing demand. This includes the reconfiguration of track between the Don River and Strachan Avenue where existing tracks will be interconnected to various platforms, allowing more riders to access trains.

Because the track had been subject to change and resurveyed multiple times over the years, concerns arose over the accuracy of existing data, particularly for subsurface assets. “We’re dealing with infrastructure that is 50 to 70 years old,” said Florin Doru Merauta, senior project engineer and electrical lead with Hatch Mott MacDonald. “We were uncertain of the location of underground utilities and were working with disparate datasets that were scattered across multiple platforms. Adding to the challenge was the fact that GO Transit’s interlocking track system is considered one of the most complex in North America.”

The SUE process was implemented to get an accurate depiction of all existing public and privately owned utility services including gas, hydro, water, fibre optics, telecommunications, and signal cabling. Non-destructive geophysical inspection methods—including ground-penetrating radar and electromagnetic induction—were leveraged to detect buried cables and utilities that crossed the corridor. The vertical and horizontal positions of subsurface assets were then confirmed through vacuum excavation. Collected data was referenced against existing maps to reveal anomalies, and information was then stored in a central database.

Property boundary and topographic data was also gathered and overlaid on a map to generate a 3D topographic survey. The study resulted in a documented understanding of the Union Station Rail Corridor (USRC) ownership and easements, detailed knowledge of surface infrastructure, and the inferred spatial position of all underground utilities targeted by the investigation.

“We used to rely on older records and would need to resurvey a project area every time there was a change, which would drive up costs,” Merauta said. “Surveyors would bring their own tools and data would be stored disparately after every survey. We now have a consistent database of accurate information that conforms to GO Transit standards and can be leveraged by contractors for years to come.”

Traditional survey techniques were also combined with LiDAR data to model the corridor in 3D, providing an accurate perspective of corridor dimensions. Merauta explained, “Trains are protected by a clearance envelope through a very narrow tunnel. 3D modelling provides a detailed perspective and better line of sight, allowing us to make more accurate measurements for corridor routes.”

SUE was also leveraged to identify underground utilities during the QEW Credit River environmental assessment (EA) study, completed to inform a long-term strategy for addressing the rehabilitation needs of the QEW Credit River Bridge. During the EA and the preliminary design stage, quality levels A and B were implemented to identify potential impediments to the design and construction of underground installations. Using non-destructive inspection methods, locatable underground utilities were targeted for further investigation. Quality Level A was then carried out through a vacuum excavation study to establish the precise vertical and horizontal positions of select buried utilities. This allowed for better design and utility coordination while minimizing the potential for conflict. All revealed information was then captured in a subsequent survey.

“This type of investigation is typically not completed during the preliminary design stages,” said Dana Glofcheskie, project engineer with transportation planning at MMM Group. “However, SUE provides a much better level of accuracy than plans from utility companies coupled with aerial photos, allowing us to more confidently identify utility conflicts and develop a more detailed utility relocation plan. This in turn reduces risk for our client during future phases of the project.”

Subsurface utility engineering as a practice works to classify information according to quality levels.

•  Quality Level D is the most basic level of information for utility locations which comes solely from existing utility records or verbal recollections. This level is primarily useful for project planning activities.

•  Quality Level B involves the application of surface geophysical methods to determine the existence and horizontal position of virtually all subsurface utilities within a project’s limits. Non-destructive technology like ground-penetrating radar and electromagnetic tools are often leveraged at this stage to accurately detect even non-toneable assets including PVC or plastic pipe, sewers, and assets containing broken tracer wires. Level B information is correlated with levels C and D to provide a comprehensive subsurface utility dataset that includes abandoned lines and other discrepancies, while confirming the accuracy of record data.

•  Quality Level A, also known as “daylighting,” is the highest level of accuracy presently available. It provides information on the precise vertical and horizontal positions of underground utilities along with the type, size, condition, material, and other characteristics of the assets. This is usually accomplished through hydro-vacuuming or hand digging in a select area.

Elements of a Successful SUE Program

If a SUE program is uncoordinated and strays from prescribed standards, the process can open project stakeholders up to further risk and liability. Here are a few things to keep in mind when integrating SUE into your project:

•  Processes should be standardized, particularly during the data capture stage. While recording field notes, templates should be leveraged that guide the data collection process such as tracing, capturing GPS points, and documenting field conditions. The more consistently that data is collected at the outset, the more accurate the final deliverable.

•  A SUE program should be as coordinated as possible and carried out by a single project team. Many service providers will outsource portions of SUE such as capturing GPS points in the field, which can drive up costs and impede the accuracy of the final results.

•  Ensure that technicians are highly trained and well versed in using non-destructive technology tools to accurately determine the existence and horizontal positioning of subsurface utilities. A high level of technical knowledge is required to implement these techniques safely and effectively.

•  Once data is captured, ensure that you have access to the geophysical expertise necessary for effective data analysis and interpretation. In addition to a GIS-compatible digital map, the final deliverable should include, where appropriate, a utility conflict matrix that provides a means to compare existing data records with information captured in the field.