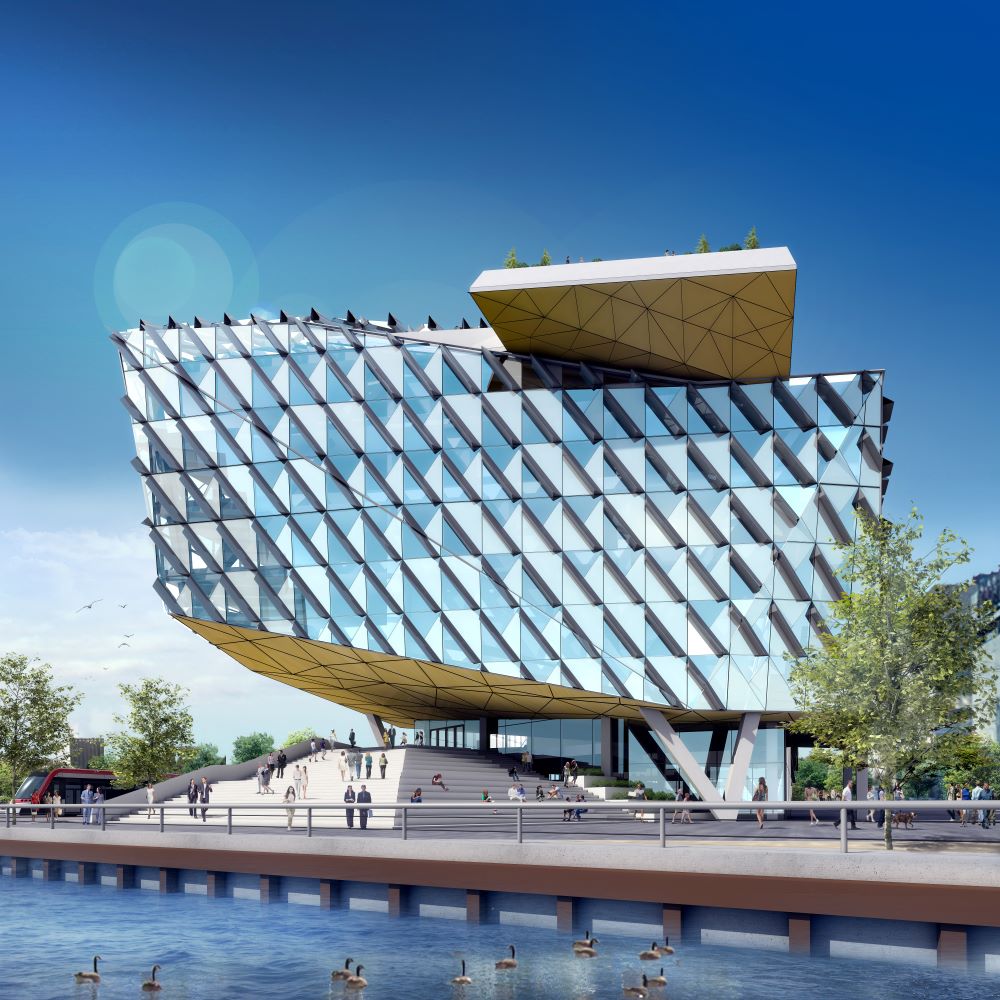 Canada’s Minister of Infrastructure and Communities, Catherine McKenna, visited Canada’s Sugar Beach – the transformed Waterfront Toronto park that was once a surface parking lot in a former industrial area. Featuring a plaza, a tree-lined promenade and views of large freighters docking in the slip to deliver sugar to the neighbouring Redpath factory, the accessible urban beach is but one of the many Waterfront Toronto revitalization projects to embody Canada’s infrastructure ambitions: to build public infrastructure that provides economic, social and environmental benefits for people across the country.

During the visit, McKenna also toured a waterfront revitalization project currently underway: the Waterfront Innovation Centre. The Centre will support the creation of a commercial district in East Bayfront and respond to the need of knowledge-based companies and workers. Central to the project is the waterfront-wide ultra-high-speed broadband fibre-optic network that is delivering one of Toronto’s fastest and most economical high-speed Internet service.

“Waterfront Toronto’s work to build a vibrant waterfront for everyone is creating jobs and economic opportunity, providing new access to green spaces and the water, and is building a more inclusive community,” stated McKenna. “We are fortunate to have talented new federal board appointees that will play a critical role in delivering on this nation-building infrastructure project. I would like to thank Leslie Woo, Drew Fagan and Rahul Bhardwaj for agreeing to serve with Jeanhy Shim and other board members and use their skills and talents to work with provincial and municipal board members to transform the waterfront and create extraordinary new places to live, work, learn and play.”

McKenna also checked in on progress of the Port Lands Flood Protection Project which, once complete, will offer flood protection to Toronto’s southeastern downtown area as well as become home to new parks, bridges, roads and the new residential community of Villiers Island.

The revitalization of Toronto’s waterfront is the largest urban redevelopment project currently underway in North America, and it is one of the largest waterfront revitalization efforts ever undertaken in the world. It includes federal, provincial and municipal investments in both traditional city-building infrastructure, such as local transportation and sewers, and more contemporary urban development, including parks, green spaces, recreation facilities and the redevelopment of underutilized post-industrial areas. These investments are expected to result in social and economic benefits for the Toronto region as well as contribute to Canada’s continued success in the global economy.