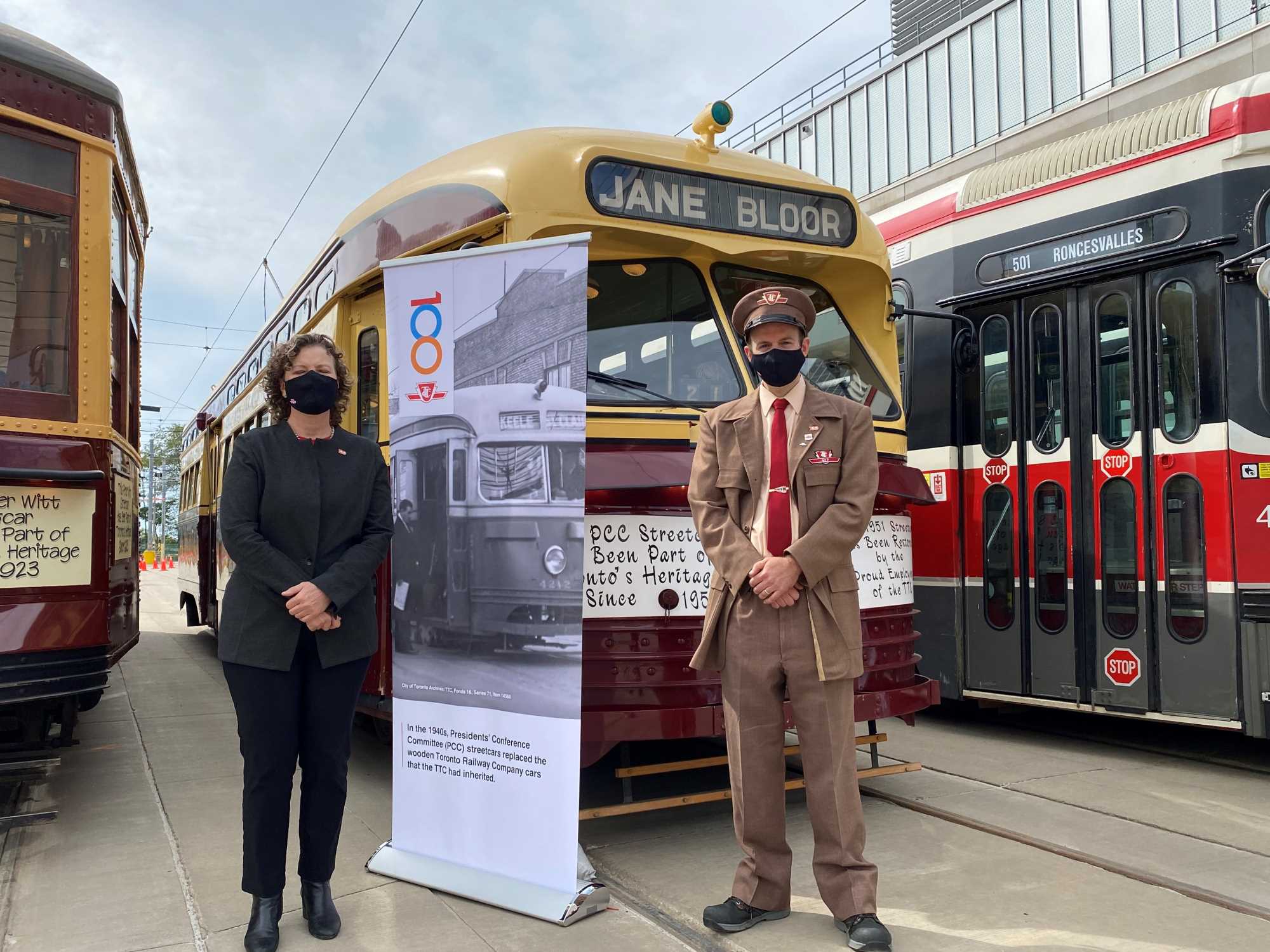 To kick off its anniversary celebrations, the TTC hosted a special celebration at its Roncesvalles Carhouse where Mayor John Tory officially proclaimed Sept. 1 as “TTC Centenary Day” in the city of Toronto.

“For 100 years, the TTC has provided a vital link, connecting people with places and opportunities in Toronto. The TTC has grown over the past century to deliver exceptional transit that provides service to all corners of the city through a network of buses, subways, streetcars and Wheel-Trans vehicles,” said Tory. “During the COVID-19 pandemic, the TTC has continued non-stop to help frontline workers get to work to help save lives. And I know the TTC is ready to help people move around the city even more as we continue to reopen and restart our economy. The TTC will be vital to Toronto’s economy and jobs coming back stronger than ever. As we celebrate the TTC’s past, I am confident in its future because we are committed as a City to continuing to upgrade and expand the TTC with the help of our partners in the provincial and federal governments.”

“This significant milestone invites us to reflect on the important role that the TTC has played in Toronto’s history over the last 100 years. Through a century of immense change, the TTC has evolved and adapted along with the city we serve,” added TTC Chair Jaye Robinson. “We’ve come a long way since 1921 and I’m very excited about our plans for the future.”

“I’m proud that while so much has changed in the last century, one thing that hasn’t is how vital public transit is to this city and the 32 billion people who have used the TTC over the past 100 years,” said TTC CEO Rick Leary. “Although the COVID-19 pandemic has restricted in-person events and forced us to modify how we’re marking this milestone, we hope the whole GTA will still join us in celebrating our centenary over the next several months. I want to extend a special thank you to the nearly 16,000 employees at the TTC, and all of the TTC’s past employees whose hard work and dedication have made this century of service possible.”

The event included a display of historic TTC vehicles, including some of the oldest streetcars – Peter Witt (1921), PCC (1938), CLRV, ALRV – the oldest GM Bus (1980), as well as newer streetcars, electric buses and Wheel-Trans vehicles. Also in attendance were two of the longest-serving TTC employees as well as former Chief Executives and General Managers and past Board Chairs.

A number of activities will be taking place over the coming months, as the TTC commemorates a century of public service. The Toronto sign at Nathan Phillips Square and the CN Tower will both be lit red tonight. Customers travelling on TTC buses today can also collect a commemorative TTC100 transfer when paying their fare. In addition, there will be celebratory banners on display outside Union Station on Front St. for the entire month of September.

The TTC is also marking the occasion through an awareness campaign on its vehicles, social media channels and in stations. A special TTC 100th Anniversary microsite has been launched at https://www.ttc100years.ca/ , which includes historical photos and descriptions about the TTC’s story. Customers are encouraged to visit the site to learn more about how they can participate in the celebrations.

Since June, the TTC has also been running a photo exhibit at some of its stations, in partnership with the City of Toronto Archives. Titled The TTC – 100 Years of Moving Toronto, the displays are a comprehensive collection of newly digitized photography showcasing the TTC’s journey over the past 100 years. The in-station displays will remain in place until July 2022, and the exhibit can also be viewed virtually on toronto.ca/archives https://www.toronto.ca/city-government/accountability-operations-customer-service/access-city-information-or-records/city-of-toronto-archives/

In the coming weeks, a commemorative 100th Anniversary TTC coffee table book and artwork will be available for purchase in the TTC online store at ttcshop.ca. As of Sept. 13, members of the public can also look out for a special TTC augmented reality filter on Instagram, which will allow them to see what they’d look like as a historic TTC Employee. A public art project is also planned for Spadina Station in 2022, to commemorate the 100th Anniversary.

Additional events will be announced throughout the year, in accordance with public health guidelines, as the TTC continues to celebrate 100 years of serving the great city of Toronto. More information about the events and activities related to this celebration will be available on ttc.ca/ttc100.

Study observes opportunities to use ridesharing to access transit routes